AFC South Training Camp Updates: Should we be worried about Andrew Luck? 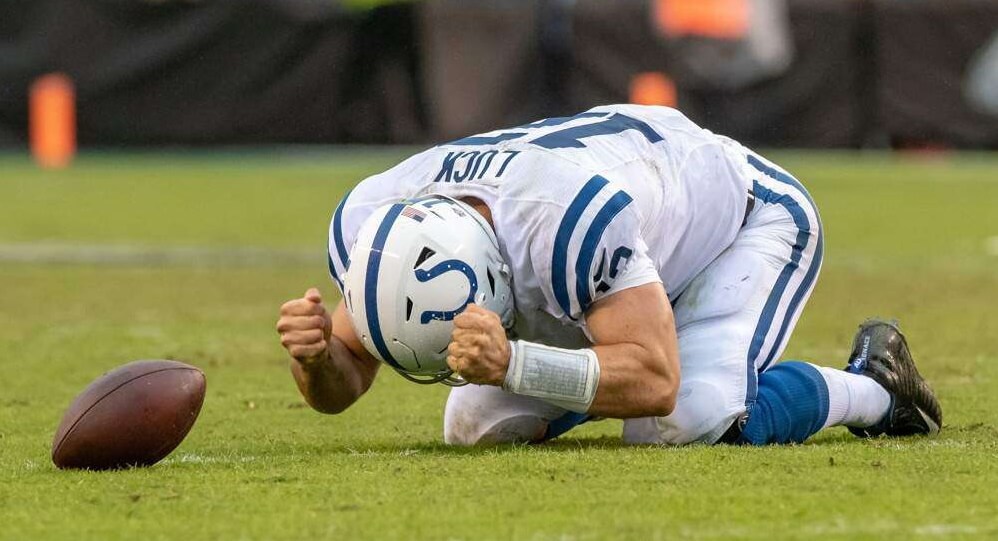 The first round of preseason games for most teams is approaching, as NFL training camp action has intensified. Just before we get a full slate of preseason action later this week, it’s a good time to check in on the teams in the AFC South Division. We spotlight notable preseason news and trends and also provide some seasonal outlooks on guys that may not play much at all.

Quarterback: DeShaun Watson will be the crux of this offense and will have to carry the attack again, as the running game has quickly lost any perceived upside appeal. The release of D’Onta Foreman means there won’t be a really promising RB in the mix, and Watson will be the top dual-threat QB in Fantasy and arguably worth a Top 3 QB selection in drafts. Unlike last year, he had a healthy offseason and enters 2019 with a heck of a lot of promise

Running Back: The release of Foreman was a stunner, but don’t make the mistake of expecting significantly increased output from Lamar Miller than in any other previous campaign with the Texans. Many fantasy players have suggested Miller gets a boost now because he will see more opportunities, but that is what we heard when he arrived in Houston three years ago. Miller’s had no threat to his playing time in any of the last three seasons and he has never been better than adequate. Miller has never totaled more than six TDs in a season with the Texans. You can only raise expectations to previous levels, which means there’s no upside. As for who will be the handcuff, the preseason will now go a long way to determining that, although Josh Ferguson has been praised in camp and some Fantasy analysts have mentioned undrafted rookie Karan Higdon as a deep sleeper. Damarea Crockett is another undrafted rookie to watch.

Wide Receiver: DeAndre Hopkins spent one day on the PUP list and admitted he played through shoulder issues last year. But there is no significant reason for concern after he played through the problems in 2018 and is ready to go for the new campaign. Will Fuller is a great Best Ball target but too unreliable health-wise. Keke Coutee was a pleasant surprise as a rookie and could progress to being a regular PPR starter this season.

Tight End: The Texans have not rostered a relevant Fantasy TE since Owen Daniels was in his prime, which did not last long enough. Rookie Kahale Warring is a size/speed combo worth watching in dynasty leagues, but he is raw and you will need to be very patient with him.

Quarterback: Andrew Luck has a nagging calf injury, but there are no indications that it will threaten his regular season. Don’t push Luck down your draft board on what appears to be a shorter-term concern. He has his deepest receiving crew ever, and only Patrick Mahomes may be a better Fantasy QB pick for 2019.

Running back: Marlon Mack should be drafted as a high-end RB2. He is going to be the TD finisher for a very good offense, and a strong passing game will only help open up more running lanes for him. If Nyheim Hines can boost his yardage totals, he’ll become a true PPR flex. Foreman now has a chance to battle for the handcuff job in Indianapolis, so he will be watched closely in exhibition games. He has to rebound with a new opportunity or he’ll simply be remembered as a Christine Michael Fantasy sequel.

Wide Receiver: We know what we get out of T.Y. Hilton, but now he has the best unit of pass-catching compliments we’ve ever seen around him. Rookie Parris Campbell can score from anywhere on the field and Devin Funchess can be a third down and goal-line area specialist. Campbell may be boom or bust Fantasy wise, though, and Funchess will be more important for real-life purposes. They will play key roles in the passing game, but won’t be consistent enough targets for Fantasy purposes. But with those two plus Hines and the TEs in the mix, Hilton is the leader of maybe the deepest contingent in the game.

Tight End: Eric Ebron might catch just over half the amount of TD passes he did last year with all the other new and returning targets he’ll have to share looks with. He should still be a Top 10 Fantasy TE. Jack Doyle is still recovering from hip and kidney issues and may start the season slowly even though he was practicing at full speed to start camp.

Quarterback: Nick Foles has a questionable crew of pass-catchers and his top RB is an injury risk. But there is hope he can add stability to the offense. For Fantasy purposes, he doesn’t have much more appeal than as a backup in a two-QB format.

Running Back: Leonard Fournette averaged only 3.3 YPC last season as he most notably battled hamstring problems. His well-detailed injury history of foot/ankle issues and the hamstrings make him susceptible to similar types of issues going forward. He still has the talents to play like an RB1 when healthy, but he can’t be drafted as anything more than an RB2. The Jags drafted Ryquell Armstead in the fifth round, but Alfred Blue is listed as the No. 2 right now and has proven to be a capable backup in the past. He’ll only be a Fantasy stopgap if Fournette goes down again.

Wide Receiver: Marquise Lee (knee) is on the PUP and may not be available at the beginning of the regular season. We will have to wait and see who Foles develops a rapport with, but Dede Westbrook and D.J. Chark may be the best bets.

Tight End: Former Cowboy Geoff Swaim should be the starter but won’t be drafted in Fantasy leagues. Rookie Josh Oliver has the most dynasty promise but has a ways to go to make an impact.

Quarterback: Marcus Mariota has never played 16 games and since 2016, when he had his most promising year, he has progressively seen his Fantasy stock tumble. The Titans added reinforcements in the passing game this season and there is a perception that this may be his final chance to show he can be the type of QB who can lead this team and operate simultaneously as a respectable Fantasy player.

Running Back: Derrick Henry has a strained calf, but it should not threaten his regular season or affect his draft stock. The true concern with Henry is that he has never been a significant Fantasy contributor over an extended period in his career, and you are risking rostering a disappointment again if you draft him in the Top 15 range at RB. Dion Lewis is only a Fantasy RB4 type as the receiving crew has become more crowded and Henry may be the primary ball carrier. But if Henry flops again, Lewis could re-enter the picture here.

Wide Receiver: Like Mariota, there is a sense that if Corey Davis does not produce up to expectations this season, he could become a forgotten Fantasy man going forward. Adam Humphries gets a chance to start and could be a dependable PPR option. Rookie A.J. Brown is a wildcard here and is worth the late-round flier. If Mariota performs well he could at least become a Best Ball contributor.

Tight End: Delanie Walker seems to be ready for the season after recovering from an ankle injury and remains a solid Top 10 Fantasy TE option even as he opens the season at 35 years old. Jonnu Smith may not be ready for the opener as he still recovers from an MCL tear. There was some conjecture he would be ready to take the Titans TE baton from Walker by now, but that does not appear to be close to happening yet.

What storylines are you watching in the AFC South? For more great rankings, sleepers, and analysis check out the 2019 Fantrax Fantasy Football Draft Kit.