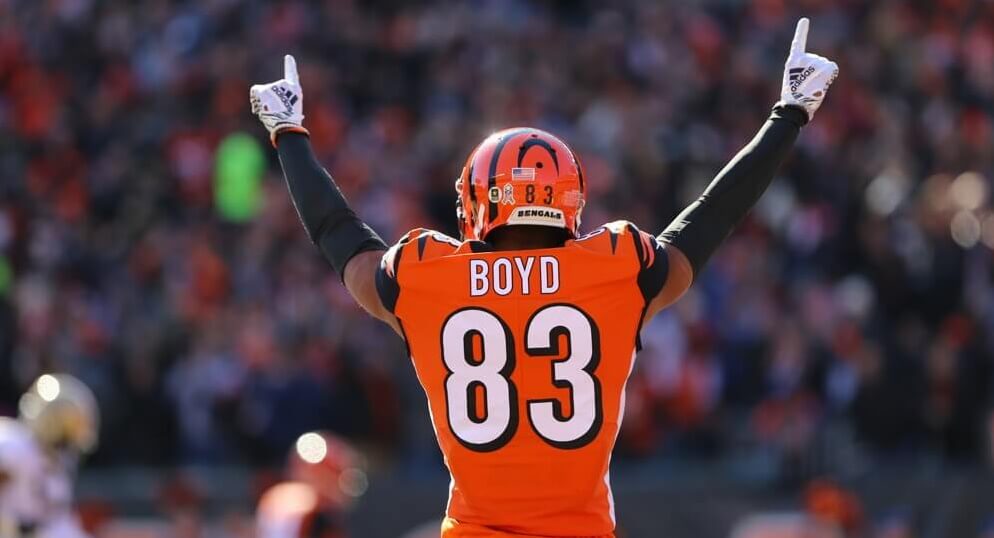 NFL preseason game action is underway, but the first week of action is not going to reveal much to us Fantasy-wise. We will mainly have our eyes trained on some rookies, but otherwise, it will be a lot of veteran backups and guys on the roster bubbles seeing significant action. Let’s look a bit further ahead in the preseason and regular season from skill position perspectives in our AFC North training camp update.

Quarterback: As always, all the right things are being said about a player looking to make progress as a new season approaches. Lamar Jackson is saying that he is feeling more comfortable as a passer and may not pull down the ball and run quite as much as he did last year. The coaching staff, meanwhile, is warning to look out for him as a running threat. Jackson cannot be considered as anything more than a mid-range Fantasy QB2 because he still has to make strides fundamentally and his receiving crew doesn’t scare any defense. If you’re looking for upside here, you may be overly optimistic.

Running Back: Mark Ingram gets a deserved chance to start after being a part-timer in New Orleans, and you should not overlook him as a solid Fantasy RB2. He is versatile and is not overworked after being involved in a timeshare for several seasons. Gus Edwards was a pleasant surprise as a rookie and initially figures to be the top handcuff, but rookie Justice Hill could conceivably make a push if he has a strong preseason.

Wide Receiver: The best and possibly most impressive receivers here are rookies. Marquise Brown was regarded by some analysts as the best WR in the 2019 NFL Draft class. He is a bit behind schedule after just being activated off the PUP (foot). Plus, his deep gears may not always be utilized ideally this season working with Jackson. Another rookie, Miles Boykin, is having a good camp and is a quality big target. But both are dynasty prospects with limited seasonal appeal. Willie Snead is not useful in Fantasy and Chris Moore has struggled in camp and may not build on some offseason talk that he could step forward to be a starter.

Tight End: Mark Andrews flashed big-play ability last season as a rookie and may turn out to be Jackson’s most reliable target as they enter their second pro seasons together. He has Fantasy TE1 promise. Hayden Hurst may catch some key passes but likely not enough to be a Fantasy factor.

Quarterback: Erratic Andy Dalton is back for the usual lower-level Fantasy depth as a QB2. It has been noted by other Fantasy analysts that he has never finished as a Top 15 Fantasy QB, so he is only going to have some true lukewarm appeal in two-passer formats.

Running Back: The Bengals want to be careful not to overwork Joe Mixon, but he is a versatile back and can be the crux of the offense. Giovani Bernard will be mixed in to give Mixon breathers and keep defenses wary of his receiving skills. Rookie Trayveon Williams will make a case to play occasionally as well. The Bengals will use Mixon as an offensive axis, though, and he will deliver for those who draft him as a back-end Fantasy RB1.

Wide Receiver: A.J. Green’s ankle injury could keep him out up to three months and he could still be a risk when he returns. This is the opportunity for Tyler Boyd to come through as a top target for Dalton, and he has the promise to make good on the chance. Draft him as a mid-range Fantasy WR2. John Ross must finally start to tap into his potential. The big-play ability is there and he is worth a late-round flier.

Tight End: Tyler Eifert has become such a frustrating injury concern that most Fantasy players want to avoid drafting him by now. C.J. Uzomah was a disappointment last year when he received his opportunity to contribute more, and should not be drafted.

Quarterback: Baker Mayfield is being picked as a Top 5 Fantasy QB in many early drafts. That may be a bit of a reach too high to consider him with the best available yet. There is definitely some significant upside with Mayfield, but he did have 17 turnovers last year and has yet to prove he can play at a Top 5 level at his position. I say he must earn it before being taken over more proven passing stars.

Running Back: Nick Chubb is locked in as the RB1 for the first half of the season, but the Browns can hopefully ease his workload when Kareem Hunt returns. But Hunt could be a conditioning and injury risk after being inactive for the first half of the schedule, so Chubb could potentially be asked to play a large role all year. The only other backup right now is 2018 undrafted free agent Dontrelle Hilliard after Duke Johnson was traded. The Browns now lack a true receiving threat out of the backfield.

Wide Receiver: Odell Beckham Jr. enters maybe his best QB situation yet with a perceived rising star as his passer. He is also reunited with former college teammate Jarvis Landry. Beckham may feel less pressured emotionally in Cleveland and might have one of his best seasons yet. Landry was a disappointment in 2018 and there seems to be less chance of a rebound with Beckham in the picture. He won’t be the target hog he was in Miami and he does not score enough, so Landry is actually not a certain WR3 in PPR leagues. Antonio Callaway is a boom/bust type for Best Ball depth and DFS usage.

Tight End: David Njoku should be a regular TD target for Mayfield near the goal line. He figures to solidify himself as a Top 10 Fantasy TE this year.

Quarterback: Ben Roethlisberger is coming off one of his best seasons, yet he is not getting enough Fantasy respect because of the loss of Antonio Brown. He is the 14th QB off the board in FanTrax drafts. If you are going to wait later for a QB, Roethlisberger is a terrific value. Many owners have seemingly forgotten that he has helped create and successfully moved on from other standout WRs before (Hines Ward, Mike Wallace, Santonio Holmes).

Running Back: James Conner is a firm mid-range RB1 who erased the memory of Le’Veon Bell quite quickly last season. Jaylen Samuels is a very capable and necessary handcuff. But this is mainly Conner’s backfield when he is healthy.

Wide Receiver: JuJu Smith-Schuster actually had more receptions and yards than Brown last season. If an organization as savvy and successful as Pittsburgh has deemed him fit to slide into the WR1 role, you should not doubt them. Good front offices with long records of success make good moves. Take JJSS with confidence as a Fantasy WR1. James Washington did not look ready for a prominent role in the offense and a rookie and the Steelers acquired veteran Donte Moncrief. He is already being talked up as the possible new No. 2 for Pittsburgh and is a nifty late-rounder. Rookie Diontae Johnson can score from anywhere on the field and will be exciting to watch in the preseason.

Tight End: Vance McDonald was quiet often during the second half of the 2018 season. But there is some local buzz that he could become a more frequent part of the offense this year. FanTrax drafters are buying in, taking him as TE10 in PPR formats.

What storylines are you watching in the AFC North? For more great rankings, sleepers, and analysis check out the 2019 Fantrax Fantasy Football Draft Kit.