Aaron Nola: The Return to Greatness in 2022 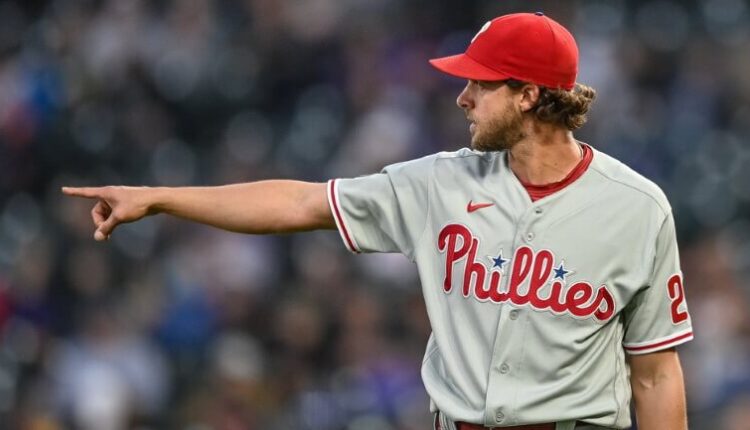 The 2021 Major League Baseball season is officially in the books. Congratulations to the Atlanta Braves on their first World Series title since 1995! We now begin to turn the page and look ahead to what is expected to be a crazy winter and offseason. When we look ahead to next season, we must first look back at how certain players performed this season and determine what we can expect from them in terms of their 2022 production. In this case, that includes Aaron Nola, who I’ll be looking at in this article.

As with many sports, there are many factors that come into play when looking at how a player performed during a particular season. Players may be statistically slow starters, not play well in certain weather, have problems with certain teams that they continued to face throughout the season, and more. What a player has done in their career before 2021 needs to be taken into consideration for these exact reasons.

This offseason, I’ll be doing a series of articles looking at players I believe will bounce back from subpar or even horrible 2021 seasons. I can only take into account the data that has been given and use that to best assess what to expect from each player in 2022. This should be fun! Let’s dive into our first player in this series: Aaron Nola.

Let’s start with Nola’s final line: 9-9 with 180.2 innings pitch (lowest in a full season since 2017) and a 4.63 ERA (highest since 2016 and 20th out of 22 qualified for the NL ERA title). In 32 starts last season, Nola gave up four earned runs or more in 12 of them (37.5% of his starts). That type of volatility proved to be costly to those starting Nola on a consistent basis as he was continuously destroying your ratios each time you thought you could trust he’d get back on track.

Part of the reason his ERA remained as high as it did was that Aaron Nola allowed the ball to get into the air a lot more than he had in years past. Nola’s fly ball percentage nearly DOUBLED his 2020 data (13.7 – 27 %) and also remained 6.5% higher than his last full season in 2019. This all while his ground ball rate of 41.6% became the lowest of his career. That was big as Nola’s HR/9 jumped to a career-high 1.30 and allowed 26 home runs this season (t-7th worst in baseball).  Nola having a launch angle higher than 9 degrees for the first time in his career seemed to contribute to the home run woes. It didn’t help that Nola also allowed opponents to barrel at a career-high mark this season, especially the fastball which had an 11.8% barrel rate.  In the process of all this, he seemed to be surpassed by Zack Wheeler as the new ace of the staff.

Putting it simply, it was a year of bad luck for Nola, who Scott Lauber of the Philadelphia Inquirer notes, “Only made it seven innings in five of his 32 starts and had a 6.19 ERA over his last six starts.” Lauber also adds that “Nola gave up 82 two-strike hits, which was tied for the most in baseball and of his 26 home runs, 12 of those came in two-strike counts, 11 with a runner on base, and 10 on his signature curveball.” Nola’s trusty curveball which put away batters at a 41% clip in 2020 became just a 29% pitch in 2021.

While things looked pretty ugly in the top section, there was also still a lot of good in Nola’s profile. Let’s start with the fact that he was fifth in the NL with 223 strikeouts. That was with a 29.8 strikeout percentage, which was the largest he’s had in a full season in his career. He also had the 5th best K-BB rate in baseball last year. According to research done by Rob Silver and talked about on the Triple Play Fantasy Baseball Show, Nola had an 84th percentile swinging-strike rate on his changeup and his knuckle curve had an 80th percentile swinging strike rate. A pitcher having two pitches to get swings and misses on at that rate is huge. Nola also had a better than league-average .222 expected batting average, the lowest hard-hit percentage allowed since 2018, and walked a career-low 5.2% of batters, which ranked in the top 8% of baseball.

One thing also lost, however, is how much Nola continued to also get ahead of hitters in the count. Nola got to two strikes in over 61% of counts last season which for a strikeout pitcher, is great for his future outlook. One thing Lauber also notes from his article is that opponents batted .186 against Nola after two strikes. If the ball was put in play with those two strikes, they hit .338. That type of bad luck you wouldn’t expect to continue into next season.

What to Expect from Aaron Nola in 2022

Advanced Metrics on Nola’s Side

Sometimes, a pitcher’s ERA does not tell the whole story. Let’s take a look at Nola’s advanced metrics. His FIP  (Fielding Independent Pitching) a measurement of runs allowed only through events that are within a pitcher’s control (homers, walks, hit by pitches) was 3.37. That was 10th in the league and more than a run lower than his ERA. Aaron Nola’s SIERA (Skill-Interactive Earned Run Average) which estimates ERA through walk rate, strikeout rate, and ground ball rate, was 3.26. That was exactly the same as he had in 2020 and 6th-best in baseball.

One of the things I also look at to change for Nola in 2022 is his insanely high BABIP (Batting Average of Balls in Play). His .308 BABIP was one of the worst in Major League Baseball. A big part of this is how your defense plays behind you, and it was an awful year for the Phillies in that regard. According to Baseball-Reference, the Phillies ranked in the bottom 10 of teams in defensive efficiency, errors, fielding percentage, and total fielding runs above average. All in all, this metric comes down to more luck than skill and I’d expect it to fluctuate closer to his .294 career mark.

Another metric I expect to change for Aaron Nola was his insanely low 66.8 LOB (Left on Base) percentage. That mark was THE WORST in all of baseball amongst starting pitchers.  I’d expect a lot closer to his career 74% mark next season, which should correlate to his ERA going down from what we saw this season.

Whether it was the defense affecting Nola’s change in pitching approach or not, we’ll never know. What can be said is that Nola increased the usage of his four-seam fastball in 2021 over 12% of the time. This coincided with his sinker dropping 7% in usage. There had been rumors of Nola choosing to stray away from the sinker because of him not trusting the defense behind him, which could show why his ground ball rate was as low as it was.

Another reason for his down season could’ve been his overall mechanics. Nola is reported to have believed that the increased fly-balls he gave up this season were more to do with flaws in his mechanics. He is reported as saying he wasn’t balanced over the rubber and his arm would move too quickly or slowly compared to the rest of his body. I would expect more fluidity with his delivery next season.

All in all, Nola is incredibly durable, a great strikeout pitcher, and a good source of innings. Nola is one of eight pitchers to make at least 30 starts in each of the last three full seasons and has made three more starts than any pitcher in baseball since 2018. There were no velocity dips, struggles with command, and Nola should be able to have a shot to get many wins with a team with one of the best offenses in the league.

Nola doesn’t have an ADP yet, but if there’s any type of discount on him next season, he is a MUST-draft in any format.

For more help in getting ready for the 2022 fantasy baseball season, check out Corbin Young’s deep dive into the breakouts seasons of Nathan Eovaldi and Ranger Suarez.