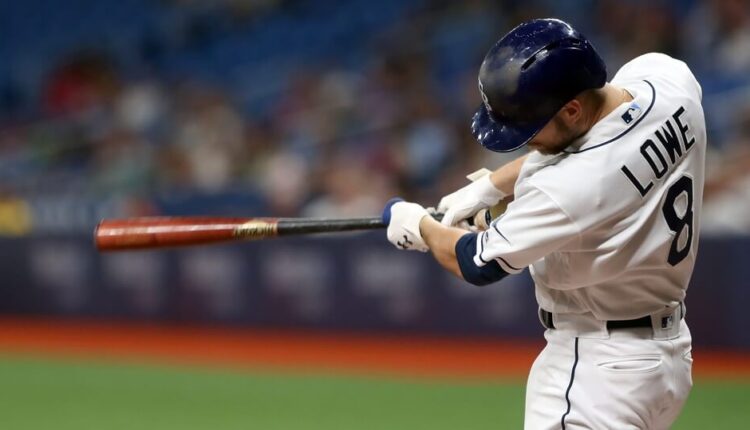 Whether it’s a young player coming off a disappointing rookie season or a veteran looking to bounce back from injury, every fantasy manager wants to nail the big rebound name every year. Finding value in the middle and late rounds is incredibly important and getting any sort of discount can change a team’s whole outlook. Heading into the 2023 campaign, who are some of the best bounce-back players for fantasy baseball?

Arguably the biggest name on this list, Hader has been one of the most dominant relief arms in baseball for his entire career, hence why there’s no real discount in his current ADP. He entered the 2022 season with a career 2.26 ERA and 15.4 K/9. The 28-year-old southpaw is now coming off his worst MLB season after posting a 5.22 ERA, including a 7.31 mark in 16 innings after he was acquired by the Padres.

One of the biggest reasons for his rough season was an inflated .333 BABIP. That’s well over the MLB average of .295 and, prior to last season, Hader had never registered a BABIP over .240. This can be traced back to his 36.3% hard-hit rate, the second-highest of his career. That alone suggests a bounce back but there’s even more as you dig deeper.

Despite the struggles in 2022, Hader posted by far the best Stuff+ in baseball. By that metric, his sinker was the second-best pitch in the league. Petco Park provides a safe environment for Hader, as seen by his 1.3% home run rate as a Padre. Heading into 2023, all eyes will be on his walk rate; if he can at least maintain average command, expect a serious rebound from Hader in San Diego.

This time last year, there was talk of Muncy missing a large chunk of the 2022 season due to an elbow injury. Instead, despite spending the offseason rehabbing, he was available for Opening Day and totaled 565 plate appearances. The injury clearly carried into the season, resulting in a .196/.329/.384 slash line with 21 homers. As much of a letdown as it was, Muncy already showed that a rebound could be on the horizon.

In his final 53 games, the 32-year-old slugger slashed .247/.358/.500 with 12 home runs and a 56:31 K:BB. Muncy posted a .282 BABIP during that span compared to a .190 mark in his first 83 games of the season. How did he accomplish this? By swinging more, making harder contact, and dropping his fly ball rate. One could draw the conclusion that Muncy’s elbow finally started feeling normal again. 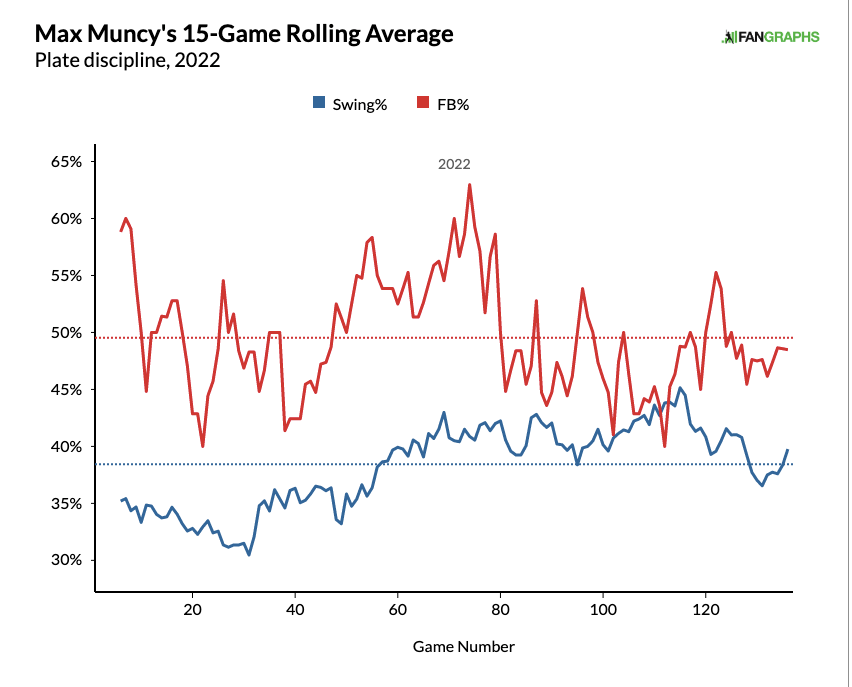 Muncy is especially valuable in OBP formats. Even in a down year, he walked at an elite rate (15.9%) and is among the best in the business at not chasing out of the zone. Muncy may not reach the 35-homer mark again, but with his profile, there’s reason to believe he can settle in around 25-30 with an OPS at least in the upper .700s. With a fully healthy offseason, fantasy managers should see early on if he’s able to build off the solid end of his 2022 season.

Stott checks off a few boxes that fantasy managers look for in a rebound candidate: he’s young (entering his age-25 season), has prospect/draft pedigree, and has a path to regular playing time. The Phillies have already shown plenty of confidence in him. As a struggling rookie, he saw 466 plate appearances and the team let Jean Segura leave this offseason, handing Stott the everyday second base job.

Stott got through a disastrous first half and showed signs of real growth as the year progressed. His brutal .188/.255/.307 slash line through 220 plate appearances was offset by slashing .276/.331/.404 across his final 237 plate appearances. The ability to adjust in his first MLB season should provide some hope for a step forward, though his plate approach near the end of the season began to fall apart. Stott posted a 28:8 K:BB in his final 106 plate appearances.

His underlying numbers don’t exactly jump off the page. Stott will never tear the cover off the ball but his elite sprint speed and quality approach at the plate should give him a good foundation to build on in 2023. He flexed his hit tool in the upper levels of the minors and showed he can hit lefties at the MLB level (.751 OPS in 110 plate appearances), On top of that, Citizens Bank Park is among the best in the league for left-handed hitters. Stott’s ceiling might be limited, but a 15-15 season isn’t out of the question.

Manaea is coming off his worst MLB season so a rebound only feels natural. The 30-year-old registered a 4.96 ERA, 4.53 FIP, and 1.7 HR/9, all career highs. He also saw his strikeout rate drop and walk rate rise compared to his 2021 numbers. Manaea’s home run troubles grew as the season went on (2.4 HR/9 in the second half), but there’s reason to believe he can adjust.

The 6-foot-5 southpaw will immediately benefit from joining the Giants. Oracle Park has the second-worst home run factor for right-handed batters and Manaea coughed up 25 of his 29 homers to righties last season. The Giants’ pitching staff has registered the best home run rate in the league the last two seasons and boasted the best walk rate in 2021. Can Manaea follow a similar path to Kevin Gausman and Carlos Rodon by finding success in San Francisco on a short-term deal?

The Giants may already have the template to unlock something extra in Manaea. Rodon was terrific in 2021, his final season with the White Sox, but he posted an MLB-leading 2.25 FIP with San Francisco in 2022. He almost completely dropped his changeup and increased his slider usage. Last season with San Diego, Manaea’s best and worst pitches were his slider and changeup, respectively. A similar change in pitch usage plus a more pitcher-friendly park could give Manaea a bounce back into fantasy relevancy.

Fantasy managers are still holding out hope that Hayes’ terrific debut in 2020 — 1.124 OPS with 14 extra-base hits in 95 plate appearances — was more than a blip on the radar. Since then he’s registered a .671 OPS (87 OPS+) with just 13 homers in 956 plate appearances. Even with his struggles over the last two years, Hayes has a quality plate approach and can hammer the ball. Unfortunately, he can’t get the ball in the air.

Among the 39 qualified MLB hitters with an average exit velocity of at least 91 MPH, only two had a lower launch angle than Hayes’ 5.2. He also posted the worst barrels/PA percentage of that group (2.7). This, combined with a poor home run factor in PNC Park, will likely prevent him from dramatically improving his power output. Hayes would benefit from being a bit more aggressive at the plate. He swings at just 61.2% of pitches in the zone and pulls the ball 26% of the time compared to the league’s average of 36.8%.

As one of the league’s best defenders at the hot corner, Hayes is locked into regular playing time entering his age-26 campaign. He swiped 20 bags last season and should be a lock to continue contributing at least a dozen steals, which adds to his value at third base. A small change in his swing path could be a difference maker and now might be the time to buy in on Hayes.

Just when Lowe had cemented himself as one of the top second basemen in the league, a lingering back issue derailed his 2022 season. He was limited to 65 games and posted a career-low .691 OPS with eight home runs. Lowe expects to have a fully healthy offseason and has a large role in the Rays’ lineup. He’ll likely sit against lefties on occasion, but assuming he stays on the field, there shouldn’t be any serious playing time concerns.

The injuries may have affected his approach at the plate, costing him in the power department. Lowe’s hard-hit, barrel, and pull rates all dropped to career lows while his ground ball rate rose in 2022. That profile resulted in a brutal .263 BABIP with some obvious “positive regression” potential. On the bright side, he lowered his strikeout rate to 22.9% and posted a decent 10.2% walk rate. 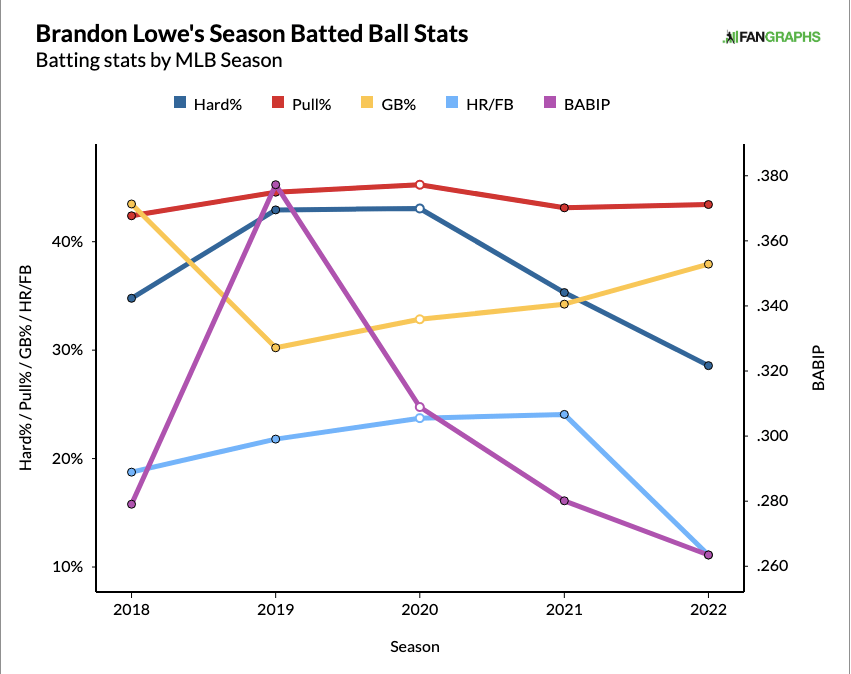 Health will obviously be the biggest factor in Lowe’s bounce back, but the shift ban should help as well. He was shifted in a career-high 85.3% of his plate appearances in 2022; his wOBA was 65 points lower compared to his non-shifted plate appearances. Expect the 28-year-old to once again be a four-category contributor with serious power upside at second base.

Rebound candidates can become league winners at an early discount. For players like Sean Manaea, this may be his last chance to regain fantasy value before falling off the cliff. For someone like Bryson Stott, 2023 could be the cheapest he’ll be available in fantasy drafts. Banking on these bounce-back players could help fantasy managers take the crown this season.

Are you buying in on Tyler’s favorite bounce-back players? For more great analysis check out the 2023 FantraxHQ Fantasy Baseball Draft Kit!