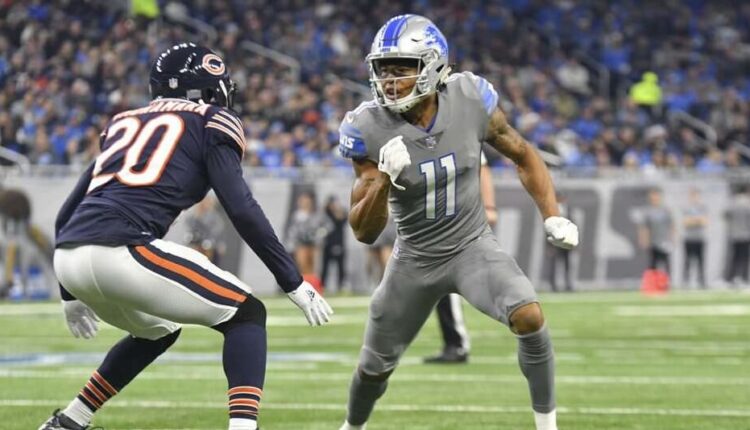 This goes out to all the forgotten heroes of days past. It happens every year. Players slide down draft boards for a variety of reasons. Some are recovering from injuries, 0thers had disappointing seasons, and some received unwanted company in the offseason. These are the undervalued players who fly under the radar but have the ability to contribute to your lineup in a meaningful way. They may not be an attractive pick, but they’re a key component of fantasy success. Take Allen Robinson for example. Last season, Fantasy Pros stated that he was taken as the 29th receiver off the board. If you owned stock of the Chicago receiver, you were rewarded with a top-12 finish.

When it comes to drafting, I’ve got three words for you: value, value, value. Together, we’re going to scout the experts’ rankings and determine which undervalued players in redraft leagues are going to contribute to your championship roster!

Marvin Jones has been one of the more undervalued players his entire career. In Cincinnatti he lived in the shadow of A.J. Green, and Detroit never gave him the spotlight either. Unfortunately, nothing has changed looking ahead to 2020. Kenny Golladay is the leading receiver for the Lions and will be for years to come. Given the way Detroit aired it out last season, however, there’s room for two fantasy-relevant receivers there. Before Matthew Stafford went down to injury, through Week 9, Jones was the WR15 in half-point PPR formats. Had there not been a bye week, he could have been a top-12 guy. Sure, nearly all of his touchdowns in that stretch came in Week 7 against the Vikings, but that’s the kind of game-winning performance he can bring to the table.

In his last 16-game season in 2017, he finished as the WR9. That year, Stafford attempted 565 passes. Stafford has always been a high-volume passer, and he was on pace for 582 attempts last year. Stafford has to shoulder so much of the burden on offense because of the team’s lack of a running game and poor defense. Defensively, the Lions have made upgrades, but they’re not an elite unit. As far as their run game goes, we’ll have to wait and see what D’Andre Swift has to offer.

According to Jones’ ADP on Fantasy Pros, he’s currently going as the 105th pick of the draft. In his worst fantasy performance in three years,  he was the WR27 in 2018 before he missed seven games to injury. If Jones and Stafford play 16 games together, he’s going to a be a WR2, and you’re going to be thrilled you scooped him up as your third or fourth receiver.

So much for the Coleman and Kyle Shanahan reunion. A high-ankle sprain in Week 1 took Coleman out of action for the following three weeks. Under normal circumstances, the team would have been reeling, but this is San Francisco. There’s an endless supply of running backs in the Bay Area. When Coleman made his return, his play was up and down. His biggest performance came against the hapless Panthers when he put up 105 rushing yards and three touchdowns. He followed that game up with 12 carries for 23 yards against the Cardinals, and therein lies the problem. Once he lost his leading role, not only was he conceding carries to Raheem Mostert, but Matt Breida was still in the mix as well. Despite his volatile workload and missing games, Coleman managed to finish the year as the RB36.

Once the postseason began, Coleman still split carries with Mostert, but he ran for 105 yards and two touchdowns on 22 carries against the Vikings. He dislocated his shoulder in the NFC Championship game and as a result, saw limited work in the Super Bowl. Injury aside, his postseason play inspired confidence. Looking ahead to this season, Breida is no longer with the team, and Coleman’s workload should increase. Breida’s absence not only means an uptick in rushing attempts, but also an increase in receptions. Although Coleman was the lead pass-catcher out of the backfield with 21 receptions, Breida was hot on his trail with 19 of his own. Coleman will be the main beneficiary of Breida’s departure.

Despite Jerick McKinnon’s return, Coleman and Mostert are the two favorites to start the year. With an expected increase in work, and assuming he can stay on the field for 16 games, Coleman is going to be a steal in drafts.

As with many of these undervalued players, Jamison Crowder is not a sexy pick. That said, he’s a pick you need to make. It would probably surprise you to know that in half-point PPR formats, Crowder finished the year as the WR31. He would have finished higher if not for Sam Darnold missing time early in the year. In Darnold’s three-game absence, Crowder had a measly 14 targets. That just so happens to be the number of receptions he caught in Week 1 with Darnold. Crowder’s young quarterback is going to be faced with a lot of change this season on offense. Breshad Perriman and Denzel Mims are new receiving additions that won’t have much time to build rapport with Darnold given the limited offseason. Crowder is going to be a safety blanket that Darnold can lean on.

Much has been made about Adam Gase and his reputation, or former reputation, as a bright offensive mind. One thing, however, is clear. He’s a fan of the slot receiver. Jarvis Landry caught 94 and 112 receptions respectively in his two seasons with Gase, and Welker caught 73 passes in 2013, despite missing three games. Granted, Crowder is nowhere near as talented as either of these receivers, but their utilization should be noted.

In Crowder’s last five games of 2019, he received no less than seven targets. A barely proven veteran and a rookie aren’t going to threaten his target share enough to damage his fantasy value. In PPR drafts, how can you pass up a player being drafted 51st at his position when he offers high-end WR3 value? Answer: you don’t.

Time isn’t kind to running backs. With each year, Mark Ingram gets closer to the invisible cliff that all running backs eventually fall off. Unless you’re Frank Gore, that is. As of now, Ingram hasn’t shown signs of slowing down. He put up yet another 1,000-yard rushing season and totaled 15 touchdowns. Not only was his overall production great, but his efficiency matched that. Ingram averaged five yards-per-carry and 9.5 yards-per-reception. So, why is he being overlooked in fantasy drafts?

When you’re drafting a running back of Ingram’s age, injury is a concern. Well, Ingram didn’t miss a single game last year to injury. As a matter of fact, Ingram hasn’t missed a game due to injury since 2015. It’s hard to bet against a guy with a strong history of durability in the second half of his career. Another reason for Ingram’s slide is the recent addition of J.K. Dobbins. The second-round pick won’t overtake Ingram for the starting gig, but he’s going to be a steady contributor in Baltimore’s offense. This doesn’t bode poorly for Ingram though, as Gus Edwards already siphoned away 133 carries last season. Ingram will still receive the lion’s share of work in Baltimore.

The biggest knock on Ingram is his touchdown efficiency through the air. On only 29 receptions, Ingram found the end-zone five times. He’s due for touchdown regression. Even taking away three of his touchdowns through the air, he would still have finished just outside of the top 12. If he plays all 16 games, and there’s no reason to expect that he won’t, his rushing total should increase. His passing yards are liable to do the same. Ingram has another year of RB1 upside to offer, and he’s going to perform at a higher rate than the RB19.

Let’s pretend the 2019 season never happened. Brandin Cooks had four consecutive seasons of over 1,000 yards under his belt. In those four seasons, he finished 13th, 12th, 9th, and 14th. In that time span, Cooks played for three different offenses. Generally speaking, receivers who switch teams have disappointing seasons. Cooks has shown the ability to assimilate to great effect into multiple offenses. Here’s the thing, I know I can’t completely disregard last season. In all fairness, it was a weird season in Los Angeles. The Rams switched their offensive scheme around, and Cooks’ hasty turnaround from his first concussion didn’t do him any favors. He sustained another concussion in a matter of a few weeks. Cooks has stated that retirement hasn’t even come close to crossing his mind, so his concussion history, although alarming, might not be as big a deal as experts are making it out to be

There’s a lot of talk about his injury concerns. Take a step back and ask yourself who he shares the field with. His counterpart, Will Fuller, has missed 20 games in the last three years alone. He’s as injury-prone as they come. If he leaves the field, Cooks is clearly the alpha in the passing game. Following DeAndre Hopkins’ trade to the Cardinals, there are 150 targets up for grabs. Cooks is already going to take his fair share of targets, and if (and when) Fuller goes down, he’ll easily demand over 100. He’s got a more than capable quarterback in Deshaun Watson, and Watson’s ability to throw deep is a natural fit to Cooks’ playing style.

In six years, Cooks has dealt with five concussions. Two of those concussions came last season. If he had taken the appropriate time to recover last year, that number may have gone down one. Randall Cobb was also added in free agency, but he’s only a minor threat to Cooks’ production. Even with Fuller on the field, I’m projecting Cooks to finish with the most targets on the team. For a player who is a year removed from four consecutive top-14 finishes, seventh-round value should have any fantasy player’s mouth watering. Cooks has the potential to be one of the most undervalued players in the draft.

For a look at my AFC Post-Draft Fantasy Previews, click here!

Have your eye on a few other undervalued players? Let us know about them in the comments below. We promise not to tell the rest of your league.