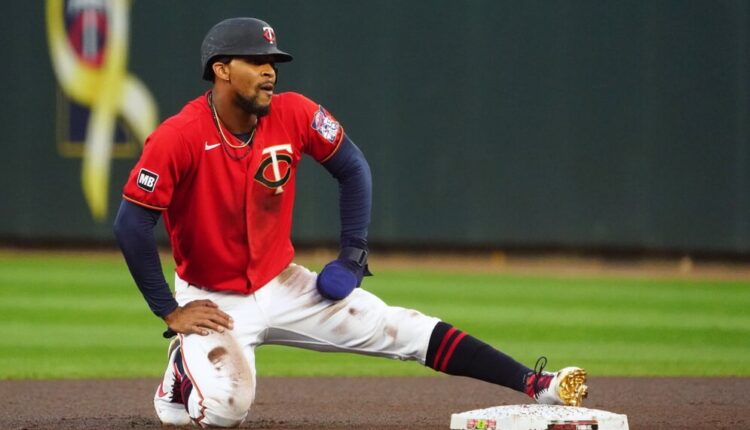 The latest in the 5 Players Who series looks at hitters who have the ability to take a leap forward in the steals category in 2022. Each of these players stole less than 15 bases in 2021 but look poised to go over 20 next season.

5 Underrated Sources of Stolen Bases in 2022

Steals as a fantasy category are getting harder and harder to come by these days. Just in the last few years, we have seen a sharp decline in stolen base attempts and stolen base successes across the majors. Here are the number of successful stolen bases across MLB in the last six years.

Considering there are 2,430 MLB games in a given season, we are now on a pace of only 0.91 steals per game. Even a team like the Royals who run like the wind led MLB with only 124 steals in 2021. Knowing that steals are broadly in decline, these players could provide sneaky speed at the draft tables this spring.

The Twins’ new $100-million man was hampered (again) by multiple injuries this past season, allowing him to play only 61 games and amass 254 plate appearances. But in just 40% of a season, Buxton piled up nine steals and was caught just one time.

That 90% success rate is representative of what he has done in previous years (10 steals, 2 caught in 2016; 29 steals, 1 caught in 2017). Add in the fact that Buxton has the eighth-best speed score in all of baseball (fifth among centerfielders) and you have a recipe for plenty of stolen base attempts assuming at least 500 plate appearances in 2022.

Some may think that 500 PA’s is a tall ask. The Twins clearly believe in Buxton’s ability to stay on the field or they wouldn’t have made such a large investment. The hip issue he faced last year is something to monitor, but a fractured hand on an HBP is fluky and not something that should concern us in 2022. If he can stay in the lineup on a semi-regular basis, Buxton should fly past 20 steals.

From July 1 through the end of the season, Rosario ranked top-30 in batting average, hitting .293 with a .426 slugging percentage including six homers and 34 RBIs. He also was a perfect 6-for-6 in steals as he moved into the top third of the Indians’ order after a slow start to the season.

Rosario is not known as a speedster, but his sprint speed was an elite 29.5 feet/second, good for the 97th percentile, according to Baseball Savant. What Rosario needs to do is improve his walk rate going into 2022. At only 5.3% Rosario would need to keep driving up the .282 batting average he had last year to get enough opportunities for 20 steals.

But at 13 swipes in just 141 games last year, it wouldn’t take too much more to push him up to the 20 mark. Rosario projects to start the year in the two-hole again for the Guardians, so that slot and some health would give him ample opportunity to get there.

As mentioned above, no team stole more bases than the Royals in 2021. A significant contributor to that total was Taylor, who played in a career-high 142 games, came to the plate 528 times, and stole 14 bases despite a laughable .297 on-base percentage.

That OBP is about the career norm for Taylor, so we don’t expect room for improvement in that department in his age-31 season. But under contract and with an outfield spot secure in 2022, those are big steps towards giving Taylor 525+ plate appearances again.

Taylor will be a drain in the batting average and power departments, but as an OF5 at the end of your draft we can out our trust in the Royals playing small ball again and trying to take every base they can up and down the lineup.

Siri was the feel-good story at the roster expansion deadline last year. After eight years in the minor leagues, the Astros finally called him up, and he made enough of an impression to make the playoff and World Series roster, even making a couple of starts throughout the postseason.

His short few weeks in the majors could not have gone better. He displayed good plate discipline (.347 OBP) and power (.609) slugging, but the speed also was a standout as he stole three bases in his 49 plate appearances with the big club.

Siri has seasons of 46, 21, and 17 steals in the minors, and his sprint speed was fifth-best in the majors while his speed from home to first was fourth-best. If Siri (going into his age 27 season) can hold off Chas McCormick and get the bulk of the playing time in centerfield, this will be an easy 20 steals.

Ok, I cheated a little bit with this one since O’Neill burst onto the scene, stealing exactly 15 bases to go along with his 34 homers and .912 OPS. But perhaps the most impressive thing about his breakout season is that he did it in just 138 games and 537 plate appearances. Give O’Neill 625 plate appearances and we could be looking at a 40-20 season.

O’Neill’s sprint speed of 29.7 feet/second was third among all left fielders and ranked 16th overall in 2021. The Cardinals also surprisingly stole the sixth-most bases in the majors last year and had an 80% success rate as a team.

The 2022 Cardinals’ lineup should feature O’Neill in the three-hole again, which should help get the plate appearances where they need to be to get him to the next level of steals. All of Tommy Edman, Paul Goldschmidt, and Nolan Arenado had more than 650 plate appearances in the 1,2, and 4 spots last year. Give O’Neill that many shots to get on base and you could be looking at a first-round value with an ADP of 49 in early NFC mock drafts.