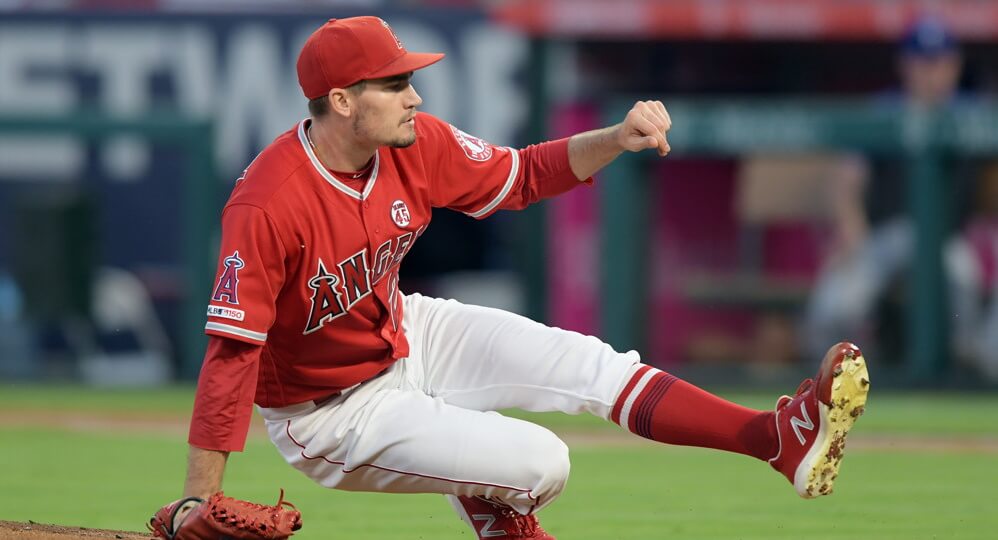 Let me start off by saying Happy New Year! It is officially 2020 and the baseball season is just a few months away. Although we have not stopped all offseason long, things are going to be hot and heavy from now up until Opening Day. We’ll be analyzing sleepers from a variety of angles, but for this piece, I’m digging deep into five of my favorite starting pitcher sleepers for 2020 fantasy baseball.

I define a sleeper as a player going outside of the top 150 in ADP that I expect to exceed expectations and provide solid returns on your investment.

Fantasy Football is done and it’s time to start thinking baseball! Leagues are already forming at Fantrax.com, so head on over and start or join a league today.

Andrew Heaney seems to be among the starting pitcher sleepers every year. It is just so hard to quit him with the upside he offers. It seems as though the long ball really affected him last year. Then again, who didn’t get hurt by the long ball last season? Not to mention, he battled injury last year as well.

What really stands out is the inflated BABIP of .312. He has always allowed a high BABIP but his career BABIP is .298 including this season. He had an ERA of 4.91, but every indicator suggests he was unlucky. His FIP was 4.63, while his xFIP was 4.18 and his SIERA was over a full run lower at 3.87.

Andrew Heaney’s arsenal utilizes a three-pitch mix. He offers a sinker, a changeup, and a curve. The sinker and changeup are decent but could use some work. He does have a great curveball. It is pretty dominant but we will revisit that in a moment.

The sinker and changeup both underperformed according to the metrics. Even that curveball had room to improve.

As you can see, he is due for positive regression in just about every place possible. Even the curveball with a BABIP of .417 should regress and make the pitch even better. The league average BABIP on a curveball is .304. The reason the BABIP may remain above league average is due the barrel rate it carries. If it does not improve he will likely carry a higher BABIP as it continues to get hit hard. That’s when it gets hit that is.

Lastly, the curveball is his strikeout pitch and rightfully so. It has a SwStr% of 19.2% and the league average SwStr% for a curveball is 12.2%. Among players who threw at least 400 curveballs last season, his swinging strike rate for the curve ranks fourth best. I anticipate Heaney to take a step forward this year. The Angels offense should be stronger this year and the defensive upgrades should further help him out. Let’s just hope he can stay healthy.

Luke Weaver was a breakout candidate in 2018 and when he busted, he was an afterthought entering 2019. Well, in 2019 he was on the verge of that breakout campaign when he fell victim to injury. It was a forearm strain at that. That injury, in particular, is relatively concerning and can be the precursor to Tommy John surgery. This was not the case and Weaver was able to finish the year on the mound. Albeit only a few innings.

He also improved his BB/9 tremendously, bringing it down from 3.56  to 1.96. This was further accompanied by a decrease in HR rate. The ERA also improved by two full runs in 2019 and was at 2.94. With a FIP of 3.07, xFIP of 3.87 and a SIERRA of a 3.84 he likely overperformed a bit but the likely regression is built into the current price.

Weaver allows more hard contact as a whole than you would like but he does limit barrels. His fastball is about all that gets barreled up with a barrel rate of 11.5%. With that said, his secondary arsenal does not allow many barrels at all. 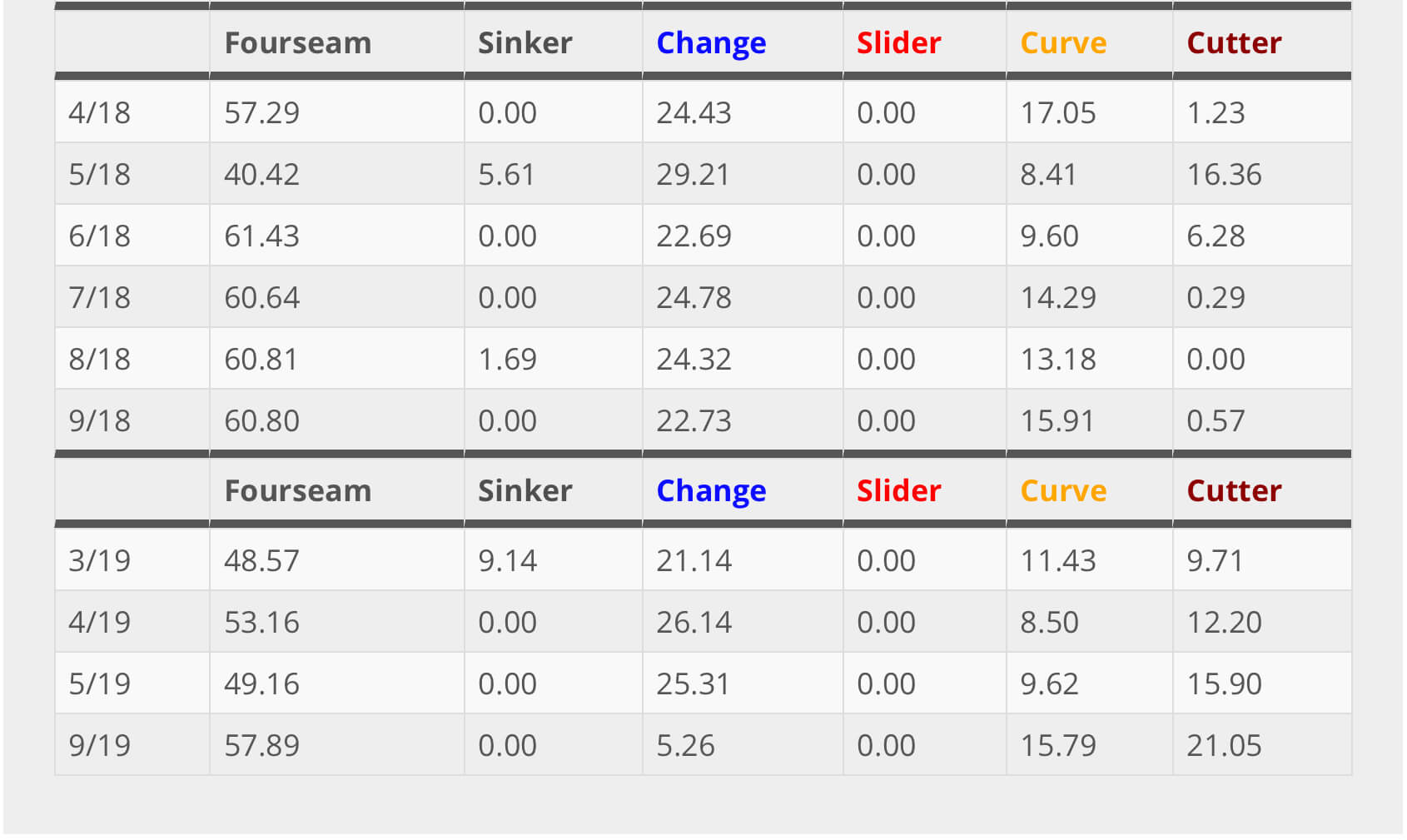 There is an increase in the usage of the secondary offerings, most notably the cutter, and a decrease in four-seam usage. This makes complete sense due to how hard it gets hit as I previously mentioned. The change in pitch mix was likely the catalyst behind the positive changes we saw in Weaver. I expect a mid-to-upper 3.00’s ERA and a K per inning. That may be nothing to write home about but it makes Weaver a nice value and one of my favorite starting pitcher sleepers for the coming season.

I am pretty much all-in on Anthony DeSclafani in 2020. He is on two of my early teams as is. Yes, I am already drafting, please don’t judge me. He is someone that stuck out to me early on in the offseason. It started with the improvement in the second half.

As you can see, other than K/9, he improved a good bit in the second half. He has better ratios, fewer walks and was overall just a solid pitcher. One thing that really stands out is DeSclafani has a 5-pitch mix of a four-seam fastball, slider, sinker (or two-seam fastball depending which site you reference), curveball, and his changeup. It is more of a 4-pitch mix due to the limited usage of the changeup.

Speaking of the pitch mix, it appears the better second half came with a tangible change in his pitch mix.

I highlighted when the changes became most notable in July. He began throwing the off-speed and secondary stuff a lot more and the fastball less. That is a pretty common theme these days. This assisted in making his pitches more effective as a whole. There was an increase in SwStr% on both the slider and the curveball from the first half to the second half. Not to mention his SwStr% as a whole last year was a career-best 10.1 %. This also came with his O-Swing% at its best since 2015 at 31.8%.

The two solid breaking pitches pair well with his two-seam fastball that induces a 73.8% weak contact rate. He has an all-around solid arsenal that showed growth in 2019.

Unfortunately, the strikeouts did not follow but I believe he can improve the strikeout rate this year with a full off-season to hone in on these changes. It doesn’t hurt he gets to have a full off-season with the new pitching coach as well. He is a great starting pitcher to grab late to add on to the back end of your rotation but I believe we are about to get the breakout season. Come and join me on the Tony Disco train.

I have recently dug into Aaron Civale a bit and I must say, I’m buying in. Here’s my tweet of what initially stood out. This is not a shameless plug (for once), but rather a good way to sum up what I really like about Civale.

If you look at a couple of his other pitches, a few things stand out. First, the curve had a 41.7% K rate and a 14.6% SwStr rate. That was an above league average SwStr%. The slider had a wOBA of .141 and wOBAcon of .097. The expected stats were a bit higher but still were not bad by any means.

Civale has control and his stuff has upside. I think there is more K potential than what he has shown to this point. It never hurts to be on the Indians who typically do a fantastic job developing pitchers.

This feels very reminiscent of 2019. Well, that’s because it is. You would think I would’ve learned my lesson but nope, I’m back again to dip my toes into the Ross Stripling pool.

The Dodgers, as always, have a ton of pitching talent. They let Ryu walk, yet they still have Urias, Stripling, May, and Gonsolin fighting over the final few rotation spots. Although I don’t buy into Stripling as the long term option in the rotation, I do buy into him getting a chance to break camp as a starter. I also believe he’s good enough if given the opportunity, to win and hold the starting spot this upcoming year.

Stripling had a limited opportunity In 2019 but he still performed well. He put up a 9.23 K/9 and a 1.99 BB/9 with an ERA of 3.47. The FIPif 3.47, xFIP of 3.58 and SIERA of 3.75 all indicate it’s pretty legit. Not to mention he showed us even better production in 2018 with a larger sample size. The ratios could actually be slightly inflated due to pitching out of the bullpen for a good portion of the season.

There is something that plays in Ross Stripling’s favor. He offers a good 4-pitch mix. When you look into it he made some changes to the pitch mix last year. 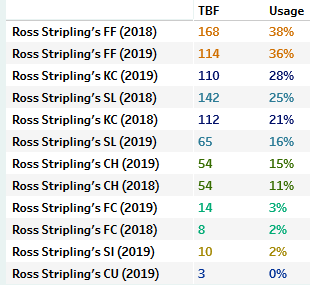 There were changes in usage on every pitch.

The two pitches that really stand out are the changeup and knuckle curve. They are both above-average pitches and it makes sense he upped the usage this season.

The changeup was very good in 2019. Stripling threw it 215 times which is a rather small sample size but it was 15% of his overall pitch usage. The bright side is it had a barrel rate of 0.0%!

The changeup was also great for inducing weak contact. It carried a weak% of 68.3%. That makes sense with that 0.0% barrel rate. Not only was the changeup great for soft contact, but it also was good for missing bats. It had a SwStr% of 17.3% and an O-Swing% of 39.6%. Let’s take a look at it.

That is just a thing of beauty.

Just like the changeup it was also great at producing soft contact with a weak% of 67.7%. Which is well above league average for knuckle curves.

At the end of the day, there is some form of a track record, a spot in the rotation for him to take on one of the best teams in baseball, good ratios and a solid pitch mix. I AM IN on Ross Stripling.

Who are your starting pitcher sleepers for 2020? Drop some names in the comments below. We promise we won’t tell anyone else in your league.