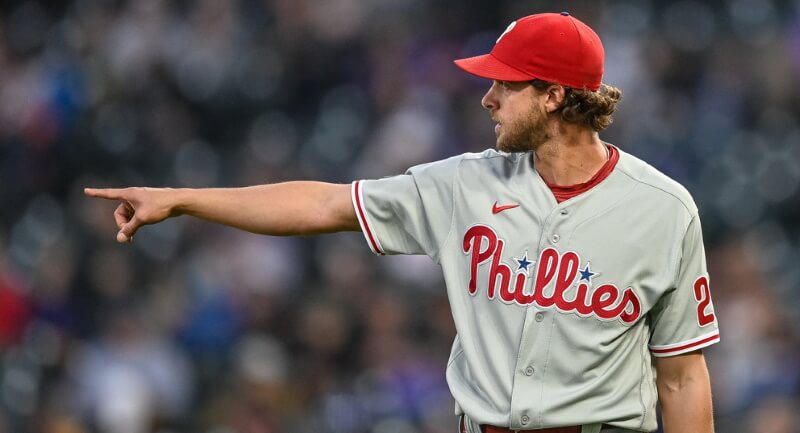 Last week, we looked at four bounce-back hitters for 2022. Today, we dive in on four bounce-back pitchers who could be value picks in 2022. Maybe one or multiple of these arms we are going to discuss hurt you last year. It is easy to have biases when a player has hurt you in the past. I had plenty of Aaron Nola shares last year, only to be hurt by his poor season. But, I will be back for more in 2022, as you can see below. Let’s get into the players I’m looking at as potential bounce-back pitchers for 2022, starting with Aaron Nola.

If I told you that Aaron Nola posted the highest strikeout rate of his career (over a full season) at 29.8 percent and the lowest walk rate of his career at 5.2 percent, you probably assume he had a good season, right? If I told you he had a 4.5 fWAR and his xERA, FIP, & xFIP all came in at 3.37, you probably really think he had a great year. Unfortunately, that was not the case for Nola, who posted a 4.63 ERA on the season.

Aaron Nola is the poster child for a 2022 rebound. His 2021 season was arguably the worst of his career and easily the worst since 2016, his first full season in the Majors. It is hard to believe that after the stats I mentioned in the previous paragraph. But, there was plenty of bad luck swinging Nola’s way.

Let’s start with Nola’s BABIP. While Nola’s .308 BABIP was not outrageously high, his three-year average between 2018 and 2020 was .274. He also had a low strand rate at 66.8 percent, which was 12 percentage points lower than his previous three-year average.

Nola’s downfall was the home run ball. It starts with Nola’s fly ball rate jumping significantly in 2021. His flyball rate of 31.1 percent in 2017 was the highest of his career before posting a 40.5 percent flyball rate in 2021. Pitch location was a significant struggle for Nola, and leaving his fastball over the middle, and several hanging curveballs caused the long ball to bite him. Not to mention Nola’s sinker, which is supposed to induce groundballs, but instead produced a 16-degree launch angle. The flyball rate on Nola’s sinker more than tripled in 2021. 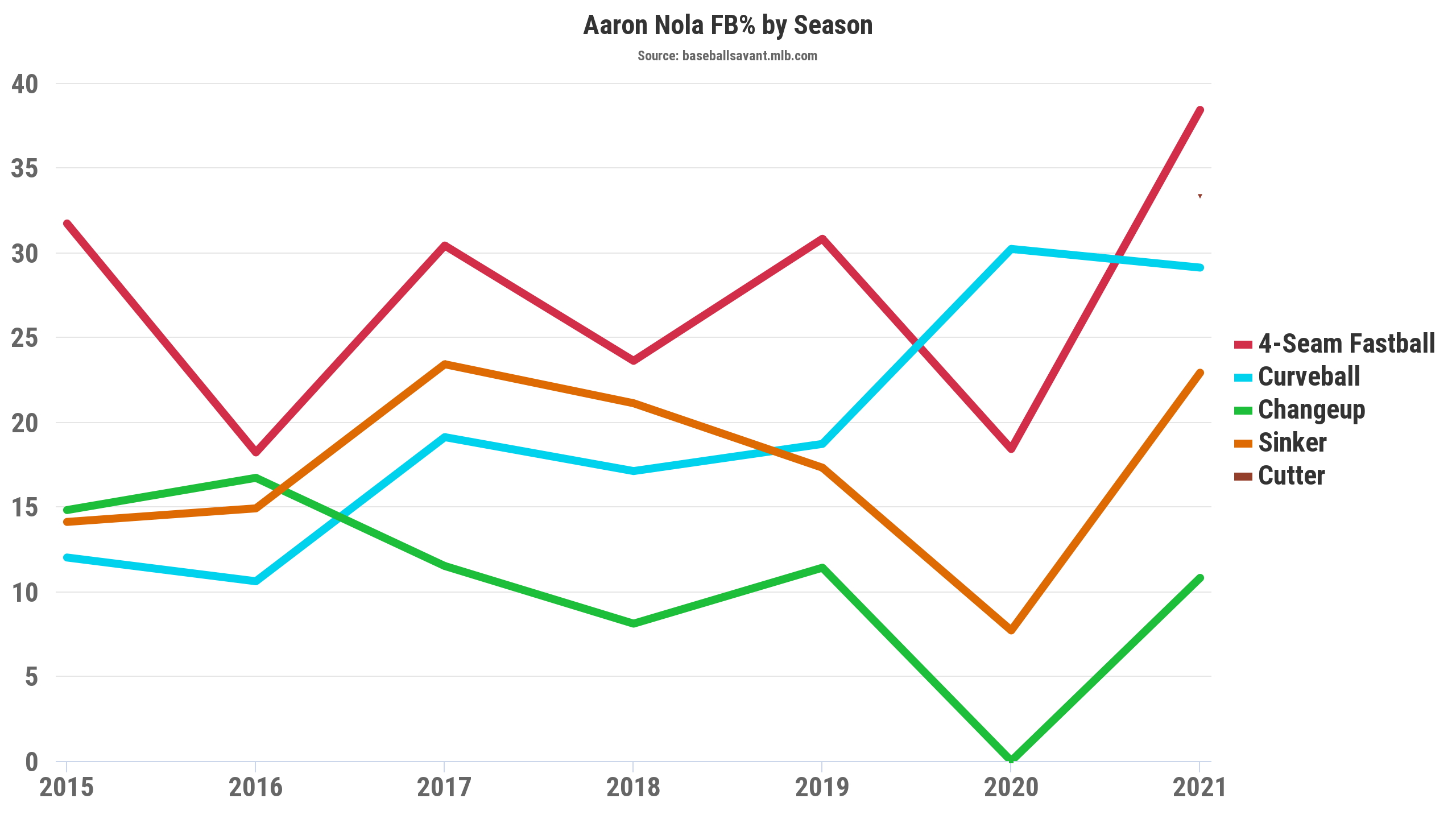 Nola left his four-seam fastball over the heart of the plate far too often and got punished. Also, his sinker was left high in the zone and failed to induce the groundballs that it should have. There is plenty of reasons to believe that Nola could fix that in 2022.

Finally, all of Aaron Nola’s underlying metrics seem to support the fact Nola should rebound in 2022. His xERA, FIP, and xFIP all were 3.37 last season. His SIERA came in even lower at 3.26. So, if you can draft a discounted Aaron Nola in 2022, you do it as he is a prime bounce back pitcher.

Eduardo Rodriguez is leaving Boston! The 28-year-old was signed to a five-year/77-million dollar deal by the Detroit Tigers. It will be weird seeing Rodriguez in a different uniform this coming season, but Detroit is a great landing spot for the lefty.

Leaving Boston feels like a great move from a ballpark standpoint. According to Baseball Savant, Fenway Park had the second-highest park factor for hitters from  2019-2021. While Fenway does not have a high home run factor, it is easy to get BABIP’d to death there, and the park had the highest doubles factor of any park in baseball.

While pitching all his home games in Fenway affected his performance, he also pitched in Camden Yards regularly, which is a great hitters park. In 2021, Rodriguez posted a 5.95 ERA at home in 62 innings pitched and a 3.95 ERA on the road in 95.2 innings pitched. A two ERA difference is quite dramatic. His career splits are not that dramatic, but Rodriguez does have a higher home ERA than on the road.

How does Comerica Park factor in here? The Tigers home park comes in tied with several other ballparks for an overall park factor of 98. Remember, Fenway was 107. Comerica is more of a pitchers park. Rodriguez ran a crazy high BABIP of .363 in 2021. Of pitchers who threw 100 innings in 2021, Rodriguez had the second-highest BABIP behind Mitch Keller. Comerica played below average for batting average on contact, which can only help Rodriguez out from a batted ball standpoint.

Rodriguez’s 2021 stats may be alarming to you. He posted a 4.74 ERA and a 1.39 WHIP. I already mentioned his BABIP being extremely high, and his left-on-base rate was also meager. The good news is he had a 3.32 FIP and a 3.64 SIERA.  He posted a career-high 27.4% strikeout rate and a career-low seven percent walk rate. It seems pretty clear that Rodriguez is due for a rebound season 2022. The move to Detroit only benefits him, in my opinion. His ADP is sure to rise, but he could still be an excellent value pick and a solid SP3-4 on a fantasy team.

San Diego fans and 2021 Fantasy baseball owners probably don’t feel like Yu Darvish was worth the cost. Darvish had an ADP of 17.8 last season and had one of the worst seasons of his career. He still posted a 4.22 ERA and a 1.o9 WHIP with 199 strikeouts in 166.1 innings. He fits the bill of “bounce back pitchers” for 2022.

It was a tale of two halves for Darvish. In the first half posted a 3.09 ERA in 105 innings pitched. But in the second half, Darvish was droppable, posting a 6.16 ERA in 61.1 innings. It would appear that the sticky substance crackdown hurt Darvish because his results began to decline after the crackdown.

There was not a significant difference in Darvish’s spin rates after the crackdown. His strikeout numbers were still there, but his command seemed to go. His walk rate increased by two percentage points, and his home run rate doubled. He also dealt with an injury that could have been lingering in the second half. 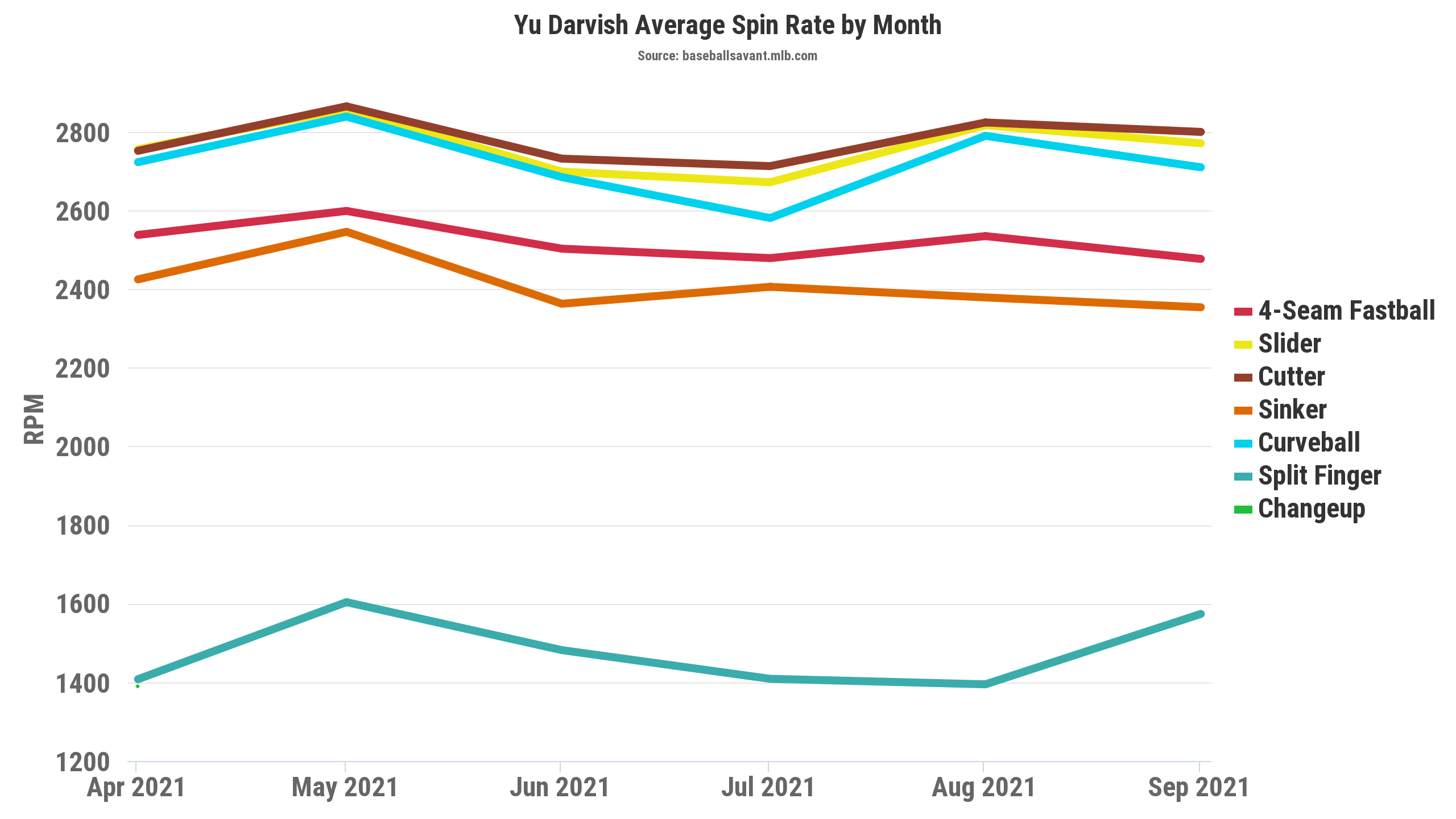 Reports also talk about the philosophy of pitchers within the Padres organization. Across the board, the Padres’ arms struggled. But, there’s a new boss in town in Ruben Niebla who came to San Diego from Cleveland. We know how elite Cleveland has been with developing pitchers.

Darvish is now 35 years old, but we have seen recently how well some pitchers have pitched into their upper 30’s. Injuries are also a slight concern for Darvish, but there is plenty of reasons to be optimistic that Darvish bounces back in 2022. At his current ADP of 88, there is plenty of room to profit.

Andrew Heaney in a bounce-back pitchers article? You probably read this name and laughed. Maybe you thought there is no way possible that Andrew Heaney could be a good pitcher. I even struggle to call him a “bounce-back,” considering he has not been a fantasy-worthy pitcher since 2018. But here we are, and give me a chance to explain myself!

As things stand, Heaney is going to be in the Dodgers rotation in 2022. One of the more attractive things about Heaney’s 2021 season was his strikeout minus walk rate of 19.5 percent. Of pitchers that threw 100 innings last year, that ranked 31st.

Heaney also had one of the largest differentials in ERA and SIERA at 1.99. His SIERA of 3.84, xERA of 4.04, and xFIP of 4.12 are encouraging, considering how bad Heaney’s ERA was last season.

If Heaney can limit fly balls, which often leads to home runs, there is a path to success. He allowed 17 home runs and a .271 batting average on his four-seam fastball last year. I wonder if the Dodgers pitching staff tinkers with his pitch mix some? Heaney is very fastball-heavy and could likely benefit by throwing it less often.

I am not saying I think Heaney is the next Robbie Ray or anything, but there is potential for profit here. I believe in the Dodgers pitch staff and their ability to get the most out of Andrew Heaney. So maybe Andrew Heaney is not quite a “bounce back pitcher” per se, but he does have a chance to be a solid starting pitcher in 2022.

If you enjoyed these bounce-back pitchers, be sure to check out my article on Bounce Back Hitters for 2022.