By Michael Richards Last updated May 8, 2022 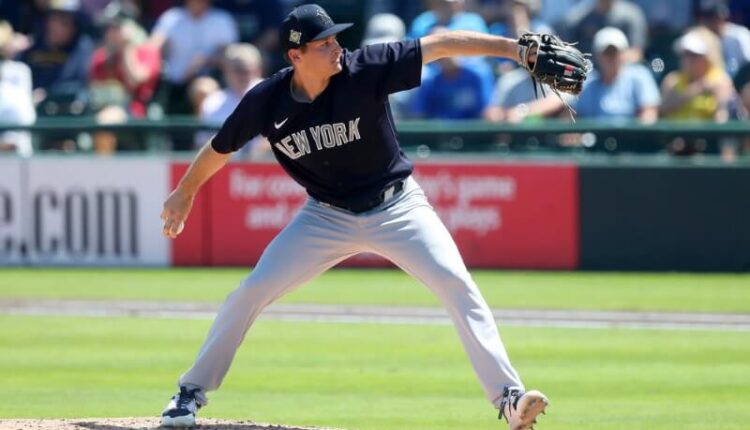 The first month of the Minor League season is in the books. In my last article, I discussed 24 hitting prospects on the rise based on early-season stats. This week, I flip it over to the other side of the ball and look at some pitchers at each level to put on your radar. As is often the case, many of these players are already well-known amongst hardcore dynasty managers in deeper settings. But there’s a good mix of talent here, and hopefully, everyone can find someone that fits their mold.

As experienced fantasy players know, the pitching side of fantasy has gone through a consistent transformation over the years. Several different styles have been used historically with success to build a competitive staff. I’m old enough to remember when the consensus was pitchers are too risky year-to-year to be drafted early. It was the norm to wait until you had a foundation on offense before considering that side of the ball.

There are now highly-successful managers who build the foundation of their strategy around pitching. Regardless of your approach, one truth remains constant – you can never have too much pitching. Injuries will occur. Under-performance is inevitable. And if you ever find yourself with more than you need, rest assured that someone in your league will need an upgrade. You can use any excess pitching you may have to fill other holes on your roster via trade. But more often than not, the plethora of depth comes in handy on your team.

6 Pitching Prospects to Target at Each Level

Hunter Brown, RHP, Astros
The 23-year-old has 2.35 ERA, 1.26 WHIP, and 34:12 K:BB in 23 innings to begin the campaign. His 34.7 K% and 3.53 xFIP back up the early-season success. The righty has a plus fastball, a double-plus curveball, an above-average slider, and an average changeup. His four-pitch arsenal indicates a strong likelihood he remains a starter long-term. This is particularly the case if he can improve upon his command. Should a move to the bullpen occur, his stuff would play up in a multi-inning hybrid role that is becoming more popular around the league. Brown makes sense as a target in leagues for his proximity, pure stuff, and competitive organization.

Hayden Wesneski, RHP, Yankees
Wesneski quietly broke out in 2021 and has carried the success to the highest level of the Minor Leagues. The 24-year-old has a 2.63 ERA, 0.83 WHIP, and 26:5 K:BB in 24 innings. The righty has an above-average fastball, a plus slider, an average changeup, and an average cutter. If he can show improvements to a third pitch while maintaining his gains in command, Wesneski should have a successful career as a starter. Since he already had experience in Triple-A last season, the righty could be a phone call away from making his debut, potentially in the bullpen, ala Clarke Schmidt.

Brayan Bello, RHP, Red Sox
Another pitcher that had success last season is building upon it this year. The 22-year-old has a 1.95 ERA, 0.87 WHIP, and 37:11 K:BB in 27.2 innings. The righty has the potential for a plus fastball, slider, and change-up, giving him an alluring three-pitch mix. As with most young pitchers, his ultimate upside will be decided by the development of his command, but it looks promising. Bello is coming off a seven-inning no-hit bid and appears to be on the verge of a promotion to the highest level. He should be a big riser on the pitching side when updated lists come out. Bello is worth scooping up in a vast majority of dynasty leagues at this stage.

Brett Kerry, RHP, Angels
The 5th rounder in the 2021 draft looks like an early draft-day steal for the Angels organization. The 23-year-old has 2.52 ERA, 0.92 WHIP, and 38:4 K:BB in 25 innings. His 40.4 K% and 4.3 BB% are outstanding for any player in the upper levels. Never mind, he had 14 professional innings entering the season and pitched out of the bullpen at South Carolina. Unlike most pitchers I have highlighted here, Kerry doesn’t blow hitters away with pure stuff. His pitchability and plus command help keep hitters off-balance with a four-pitch arsenal. Kerry is on the radar as an add in dynasty to see how the rest of the season plays out.

Gavin Williams, RHP, Guardians
Williams has been nearly unhittable this season. The righty was selected 23rd overall in the 2021 MLB draft and has made an immediate impact. The 22-year-old has a 1.46 ERA, 0.69 WHIP & 39:9 K:BB in 24.2 innings. The righty has a double-plus fastball, an above-average slider, and an above-average change. Continued improvements to his command will be worth monitoring. When factoring in his stuff, pedigree, and organizational track record developing pitching, there is a lot to like in his profile. Williams should be firmly on top-100 lists in the coming weeks and months. Considering his utter dominance at his current level and college pedigree, a promotion to the upper levels is right around the corner.

Gordon Graceffo, RHP, Cardinals
The 5th round pick (151st overall) out of Villanova in 2021 has been outstanding since debuting last season. The righty has a 0.65 ERA, 0.51 WHIP, and an incredible 38:2 K:BB in 27.2 innings (39.6 K% and 2.1 BB%). The righty deploys an above-average fastball, an above-average changeup, an average curveball, and an average slider with above-average command. Listed at 6-foot-4 and 220 pounds, Graceffo is making a case for a promotion to Double-A in the coming weeks. Graceffo is a very intriguing dynasty stash who appears to be an advanced college arm. It does not hurt that he is developing his craft in an outstanding organization for pitchers.

Ricky Tiedemann, LHP, Blue Jays
The projectable lefty was a 3rd round pick (90th overall) in the 2021 draft. The 19-year-old has a 1.44 ERA, 0.80 WHIP, and 39:12 K:BB in 25 innings to begin the season. Tiedemann has an average fastball, an above-average slider, an above-average changeup, and above-average command. Like most players on this list, command/control are currently lacking behind his other skills, but he has outstanding upside if he is able to harness it. Teenagers who excel in a full-season ball on the mound tend to have a lot of potential. Tiedemann has been nothing short of phenomenal in his first professional experience. He is a savvy long-term dynasty target before his appeal goes mainstream.

Cristian Mena, RHP, White Sox
The teenager has caught my attention with his early performance. Through 4 starts, the righty has a 2.86 ERA, 0.95 WHIP, and 31:5 K:BB in 22 innings. The 19-year-old has an average fastball, plus curveball, and average changeup, though scouting grades for young pitchers can often be misleading. It is still very early in the process, but Mena shows early signs of promise as a standout his age. Consider adding Mena in deep, competitive leagues.There is potential for profit if he can build upon his start and gain more mainstream traction. Even if you generally avoid young pitchers, he could have some secondary trade appeal in that scenario.