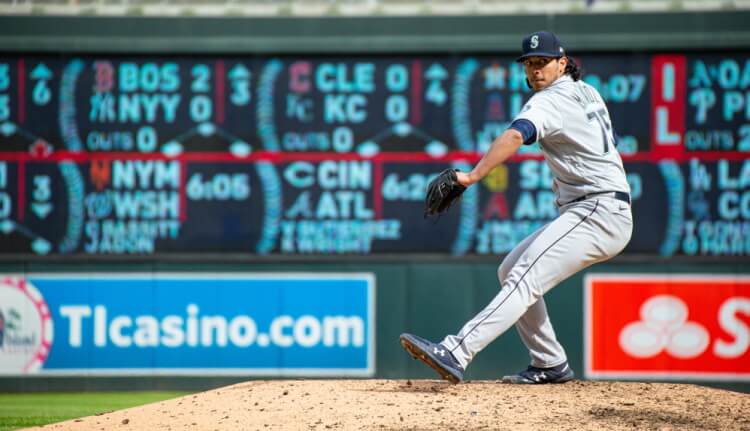 One thing that struck me playing in very competitive leagues against some of the top players in the world; they never stop preparing. It’s time to start thinking about where to find some bullpen cheat codes for the 2023 season. Here’s hoping that you won some leagues and finished in the money in 2022. Let’s take a deeper dive into this year’s bullpens and see who could climb into a closer’s role, or even just a higher leverage role, in a few short weeks.

Here are some guys we might want to target who might not have clear roles heading into the season?

This is not a huge reach if you have seen Munoz pitch for Seattle.  He is electric. If you like to look at Baseball Savant, a profile doesn’t get any more blood red than his.  Check this out: 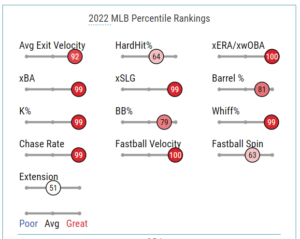 A whopping 96 punchouts in 65 innings and chipped in with four saves as well.  This profile tells us that even if Munoz isn’t anointed the closer, he will still be valuable in a middle relief role.  A whopping 38.7% strikeout rate and a paltry 6% walk rate. His 2.49 ERA had an xERA (I know, not a perfect stat, but we have to count ERA in most leagues) of 1.84, which puts him in the top 1% of all pitchers.  He is outstanding, and all he really needs is an opportunity to close.

The Mariners do have other experienced options in current closer Paul Sewald and sometimes closer Diego Castillo.  But if we’re being honest, Munoz has the best stuff of anyone in their bullpen.

We have also seen that having the best stuff doesn’t mean the guy closes games; Munoz could just as easily be a stopper. Sewald could also swing into that stopper role as well. The point is, this all speculation and we will have to watch how the Mariners go about their winter business.  They could make any of a number of moves.  I will say this: if somehow Sewald gets moved this winter to a different team via trade, Munoz is in my top ten list of closers for 2023.

This note here is more of a “don’t forget about him” message, so I am kind of cheating here. With Kenley Jansen signing in Boston, the Braves’ acquisition of Iglesias at the 2022 deadline did not go unnoticed.   I know it seems like a long time ago, but many pundits (this one included) had him as a top-five closer going into 2022 when he was a Los Angeles Angel. He will be a top-10 closer this year based on stuff and opportunity.  This one feels like a “duh” moment but just in case you forgot about him; not a breakout by any means, but I was surprised how many readers forgot Iglesias was the guy in Atlanta.

If you have not read up on the Chicago Cubs “Pitch Lab” experiment in the minor leagues, please do so. It’s fascinating stuff and makes so much sense from a development standpoint.  Hughes is a graduate of the Pitch Lab, as was Scott Effross of the New York Yankees. Hughes would seem to be the frontrunner for the closer job in Chicago, but the Cubs have had a busy offseason, and adding an experienced closer may still be on their list. They did add Brad Boxberger to their pitching mix, but Hughes has the best pure stuff of anyone not named Adbert Alzolay in their bullpen. Hughes did have eight saves last year and 68 strikeouts in 57.2 innings.  The Cubs have been mentioned as possible destinations for free-agent relievers Andrew Chafin and Matt Moore, so we will need to see what happens there.

Alzolay is probably best known to fantasy players for being a starter in MLB, but that could easily change this spring.  The Cubs look to a rotation of Marcus Stroman, Jameson Taillon, Justin Steele, Kyle Hendricks and Drew Smyly.  So unless the Cubs go the unconventional route and use a six-man rotation, Alzolay does not have a spot.  Where he would look great would be as a potential stopper.  In 2022, Alzolay appeared in only six games, all in relief, and produced the following stat line: 2-1, 3.38 ERA, .83 WHIP, and 19 strikeouts in 13.1 innings.  That was good for a 36.5 K % and only a 3.8 BB %. Of course, it is a small sample size, but it’s fascinating to think of Alzolay in a multiple-inning relief role, which could be teeming with punchouts.  Alzolay moved to using his four-seam fastball more often (36.8% in 2022 as opposed to 18.5 % in 2021) as well as continuing to display a wipeout slider (32.6% of the time) while limiting his sinker (from 27% in 2021 to 10.9% in 2022).  He added almost a full tick on his fastball while subtracting almost a full tick on the slider.  The recipe seems there for an effective bullpen weapon.

Phillips would appear to have the inside track to the closer’s job in Los Angeles.  Used in a high-leverage role in 2022, Phillips put up seven wins, two saves, an unbelievable 1.14 ERA, 0.76 WHIP, and 77 punchouts in 63 innings.  Phillips had success in 2021 as well, but nothing like what he did last season.  He limits hard contact, and his 86.1 MPH exit velocity was in the top 7% of the league.  His slider is his most used pitch, but he also added a cutter to throw to left-handed hitters while trimming his reliance on the four-seam fastball.  And it made a huge difference in his arsenal. With the relocation of Craig Kimbrel to Philadelphia, and with the supposed request of Daniel Hudson to not be the closer, the pathway to Phillips getting saves is clearer at this point.  Of course, the Dodgers could shift gears and bring someone else in, but absent that, Phillips could be the guy.  You could rightfully point out that Brusdar Graterol could be in this mix, but he lacks the high-powered K percentage (only 21.8% in 2022) that many teams look for in a closer, despite an average velocity in the 97th percentile.

I know what you are thinking. This is Ryan Pressly’s job, he’s armed with a contract extension, and you are correct in thinking that. And yes, Hector Neris and Rafael Montero also lurk here and are excellent relief pitchers.

But here’s the thing to know: Pressly was on the IL twice in 2022, once with a knee injury and the other with a neck injury.  Should he be forced to miss time again in 2023, Abreu could be at the top of the list to close.   Abreu could easily step into 10-15 saves should Pressly be injured again this year.  File his name away and watch what happens this winter.  At the very least it would appear that he could be a multiple-inning monster in 2023.  Or, as my good friend Dave Funnell pointed out to me, could the Astros use Abreu in a Cristian Javier role and expand his innings and role?

Abreu’s stats in 2022:  four wins, two saves, 1.94 ERA, 1.18 WHIP, and 88 strikeouts in 60.1 innings. Those are some outstanding numbers for a non-closer.  Abreu relies on a 97.8 MPH fastball and a vicious 88.1 MPH slider to mystify hitters.  A whopping 63 of his strikeouts came on the slider.  My point here is that yes, there could be guys ahead of him in the Houston bullpen, but he could very easily become a secret fantasy weapon this season.  Wouldn’t you rather have Abreu than a sixth starter who could torpedo your weekly stats?  I would rather take one or two of these middle-inning relief guys who could get me solid ratios and maybe 100 strikeouts.

The Detroit Tigers traded sometimes closer Joe Jimenez to the Atlanta Braves this winter, and then doubled down by moving Gregory Soto to the Philadelphia Phillies.  That leaves the closer role at this time to righty Alex Lange. Lange limits hard contact as evidenced by his 86.1 MPH exit velocity, which was in the top 7% of the league last year.  Let’s look at his changes between 2021 and 2022:

Interesting, right?  Not your prototypical stuff for a potential closer, but intriguing, nonetheless. Lange had 82 strikeouts in 63.1 innings pitched, a whopping 56 of those punchouts on the curveball. Note the almost total dismissal of the fastball.  This could be a situation to watch in Spring Training, especially if the Tigers do not add any arms to the back end of the bullpen. One thing Lange will need to work on is the slightly higher walk rate.