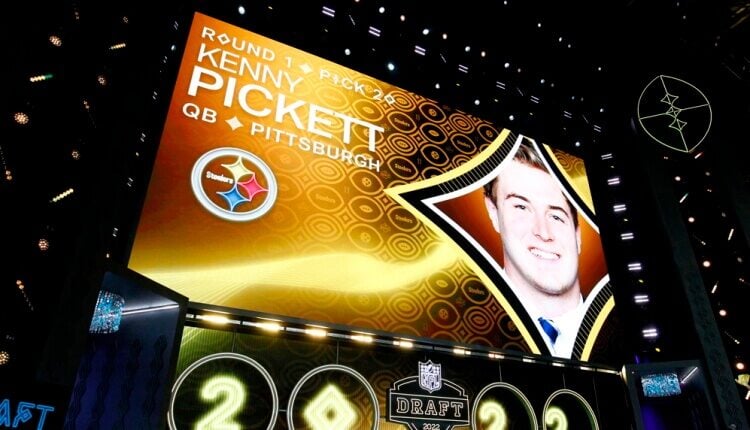 Many dynasty football leagues now play in a superflex format. Quarterback scarcity is a far bigger concern in superflex formats, which changes how I have the incoming class of quarterbacks ranked between 1QB rookie rankings and superflex rookie rankings. In 1QB leagues, few quarterback prospects are selected in the first round of rookie drafts. However, in superflex leagues, consistent producers at QB2 and QB3 on dynasty rosters are necessary depth since it’s beneficial for the vast majority of teams start two quarterbacks every week.

Scarcity at the position pushes many quarterbacks up into the first round of superflex rookie rankings, which in turn pushes talent at running back and wide receiver down into the second and third rounds. With the 2022 NFL Draft in the books, here are my updated top-36 rookies assuming a superflex format with PPR scoring (you can find my 1QB rookie rankings here).

Most mock drafts had the Steelers selecting a quarterback with the 20th overall pick in the first round, but they were split between Kenny Pickett and Malik Willis. The hometown hero ended up staying in Pittsburgh, but while Pickett will get a solid shot to start and some measure of job security once he does, even quarterback-needy teams in superflex shouldn’t reach for him. While Pickett can read coverages and has good overall accuracy and arm strength, he makes risky decisions at times and struggles with unexpected pressure. The latter is of particular concern in Pittsburgh. Although the Steelers have good surrounding talent to support Pickett in Najee Harris and a strong wide receiver room, the offensive line leaves much to be desired. Chukwuma Okorafor and Dan Moore Jr. bookending the line at the tackle positions are middling options, and how the interior of the line will look is still very much up in the air. It wouldn’t be shocking if Mitch Trubisky were to beat Pickett out for the starting job for the majority of the 2022 season, and it might actually be a blessing in disguise for Pickett’s development to sit until Pittsburgh makes additional upgrades to the offensive line next offseason.

So what about Willis after his fall from grace into Round 3 of the NFL Draft? He has since fallen to the late first round of my  superflex rookie rankings. The long-term upside is still there even if Willis lacks short-term production and is no longer worth a top pick. Willis still has the raw tools as a passer and abilities as a runner to have elite upside in fantasy, but he needs to develop as a passer to progress through reads and work on his accuracy. Prior to the NFL Draft, I compared him to Jalen Hurts with more job security if and when he takes over as the starter. After Ryan Tannehill‘s awful showing against the Bengals in the playoffs, Willis could start at some point this coming season or in 2023 if Tannehill performs poorly for a stretch of games this year or in the playoffs. In fact, Tannehill has little dead money left on his contract after 2022, so don’t let Willis’s fall in the NFL Draft drop him past the late first or early second round of your superflex rookie drafts.

Ridder is an interesting prospect to take a chance on as well later in superflex rookie drafts. Like Willis, he has the raw tools in arm strength and mobility to have incredible upside, but he has a lot to work on as a passer before that can materialize. Ridder has inconsistent accuracy due to mechanics and makes baffling reads at time, both of which will limit his starts if not fixed. Coincidentally, he reminds me a lot of Marcus Mariota, who he’ll now sit behind as a rookie in Atlanta. In his one game filling in for the Raiders in 2020, Mariota was able to keep the game close against the Chargers and had a good fantasy showing with 88 rushing yards and a rushing score. However, he threw behind his receiver late in the fourth quarter, which resulted in a costly interception and ultimately led to a loss. This is the concern with Ridder. He’s a risky upside bet in that even if he starts late in the 2022 season for the Falcons, he’ll need to play impeccably for them to not draft a stronger quarterback prospect early in 2023. Ridder fits the theme for the 2022 quarterback class as “risky but with upside”, so take shots on quarterback prospects like Matt Corral and Carson Strong later in superflex rookie drafts rather than reaching for Pickett or Willis in the early first round.

Last updated on Tuesday, May 10th.