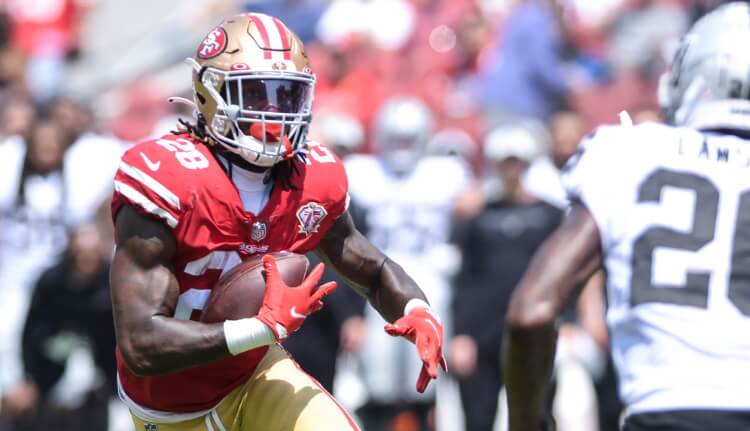 The NFL’s free agency period will officially begin on March 16th, and there should be a flurry of moves this offseason as teams try to replicate the success that the Rams and Bengals achieved after being aggressive last offseason. There are some big-name veteran running backs in the 2022 free agent class, like Leonard Fournette, Melvin Gordon, and Cordarrelle Patterson. However, the best dynasty buys may be more under-the-radar names. The running backs below could see a rise in their respective dynasty values in just a few short weeks whether due to signing with the right team or as a result of departing teammates.

After the Chiefs lost both Clyde Edwards-Helaire and Darrel Williams to injuries late in the year, they turned to veteran Jerick McKinnon during the playoffs. In their three playoff contests, McKinnon played well both as a runner and a receiver, averaging 11 carries and five receptions for 105 yards from scrimmage per game. Both he and Williams are impending free agents, but with his contributions in the playoffs, it would make sense for Kansas City to re-sign him to a fairly cheap veteran contract. The Chiefs have been reticent to employ Edwards-Helaire as a workhorse back, and McKinnon could serve as a perfect complement in a change-of-pace role.

Even in a 1B role, McKinnon would have value as a flex play in PPR formats due to the Chiefs’ overall offensive efficiency. Patrick Mahomes took over as the starter in 2018, and in the four seasons since, Kansas City has never ranked lower than sixth in offensive points per game. And in the past three seasons after Mahomes’s MVP year, the Chiefs have ranked above league average in targets to the running back position. Even with Edwards-Helaire taking the bulk of the carries, McKinnon can produce double-digit points per game in PPR formats as the change-of-pace and receiving back in a prolific offense. And then there’s the possibility of Edwards-Helaire missing time due to injury, which he has in each of his first two seasons in the league. That doesn’t necessarily make him “injury-prone”, but the risk is there.

And even assuming that Edwards-Helaire won’t miss time in 2022, the Chiefs may limit his workload to try and keep him healthy, opening up significant touches for the no. 2 back. Of course, that may or may not be McKinnon depending on what general manager Brett Veach decides. McKinnon is a risky buy depending on whether or not the Chiefs retain his services, but considering the fact that he isn’t expected to land a large contract and given his postseason contributions, extending his stay in Kansas City would make sense for both parties involved. There haven’t been many recent dynasty trades involving McKinnon to reference, but he wasn’t even drafted in the most recent DLF startup ADP as of January. McKinnon is one of the cheapest dynasty buys right now, and his value could spike in a few weeks if he were to re-sign with Kansas City. Dynasty GMs should acquire McKinnon for a third-round rookie pick or less.

Free agency affects more than just free agents. Departing teammates can open up opportunities as well, and Michael Carter could and should become the clear lead back for the Jets in 2022. New York signed Tevin Coleman last offseason in large part due to his familiarity with offensive coordinator Mike LaFleur’s offense from their time together in San Francisco, and it’s unlikely that they’ll retain him this offseason. Even if he were to stay with the Jets, it would be more so for depth rather than as the starter. Carter started beginning in Week 3 this past season due to Coleman missing the game with an illness, and he maintained the lead role until he suffered a high ankle sprain in Week 11.

During that seven-game stretch, Carter averaged 58 percent of the offensive snaps and 16 touches per game. From a fantasy standpoint, he was the no. 16 running back in PPR scoring and averaged 15.2 points per game. These are impressive fantasy numbers considering that the Jets’ offense ranked fifth-lowest in offensive points per game, and it certainly didn’t help that the Jets’ offensive line ranked just 22nd in adjusted line yards in 2021. Carter’s fantasy production over this span has largely been forgotten by the fantasy community after his three-game absence due to the high ankle sprain, and he saw a more limited role and failed to score a touchdown over his final four games after returning from injury.

The Jets are top-five in salary cap space heading into the offseason, and there are a number of big-name offensive linemen that they could pursue to help protect Zach Wilson and improve the run game. Ty Johnson and La’Mical Perine are expected to stay on the roster, but Carter was the only back drafted by the current regime in New York and showed well as a rookie. All signs point to him as the starter heading into next season. Recent dynasty trades per DLF’s trade finder include Carter and Michael Thomas for Calvin Ridley and Carter for Kadarius Toney straight up. He’s not the cheapest of dynasty buys, but Jets players are constantly undervalued in fantasy due to the team’s lack of success, and Carter has a path to RB2 production or better in 2022. He’s worth a late first-round rookie pick in 2022 and would be a steal for anything less.

The unsexy post-hype players who are left for dead often present the best opportunities as cheap dynasty buys with upside. Most dynasty GMs avoided James Conner last offseason with a ten-foot pole, but an injury to Chase Edmonds midseason allowed Conner to seize a workhorse role, which resulted in elite fantasy production for a few games. Even prior to Edmonds’s injury, Conner served as Arizona’s goal-line back and produced eight touchdowns in eight games to start the year on limited touches. Trey Sermon was billed as a fantasy darling by many analysts last offseason after the 49ers traded up to draft him in the third round, myself included. Alas, Sermon landed in Kyle Shanahan’s doghouse with Elijah Mitchell surprisingly taking over the lead role after Raheem Mostert‘s Week 1 injury.

Still, Sermon looked adequate in his two games as a starter while Mitchell was out due to injury. He saw just 10 carries in Week 3 against Green Bay after San Francisco fell behind early, and Kyle Juszczyk vultured a red-zone touchdown. In Week 4, Sermon ran well with 89 yards on 19 carries, but it was another dismal fantasy showing due to lack of touchdowns. Mitchell figures to be the starter heading into 2022, but Sermon may well serve as the 49ers’ No. 2 back. Mostert is an impending free agent, as are Jeff Wilson and JaMycal Hasty. Hasty could be retained on a cheap minimum deal as an exclusive-rights free agent, but there’s a path to fantasy relevance for Sermon alongside Mitchell.

Even with Mitchell as the starter, Shanahan has employed goal-line backs in recent memory with his committee backfields, and Sermon fits that job description. He’s the bigger back of the two, and while Mitchell breaks big plays as a one-cut runner, Sermon is more of a downhill runner who can plow through defenders for those short gains. More importantly is the gap in price between the two San Francisco running backs. Dynasty GMs who drafted Sermon are disappointed, rightly so, and some are willing to part with him for pennies on the dollar. Recent trades per DLF’s trade finder include Sermon for a third and fourth-round rookie pick in 2022 and Sermon for Justin Jackson straight up. The upside is still there for Sermon, but the asking price has plummeted, making him among the best dynasty buys right now. He should be a trade target at the cost of a third-round rookie pick or less.