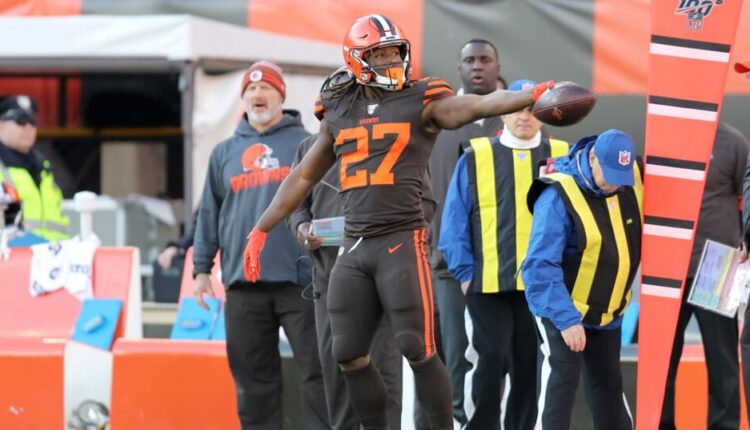 Another week of training camp is in the books. Now we are all left wondering, what else is new? While it’s hard to match the exciting and surprising news of the first few training camp sessions, there’s still plenty of news to report. Whether it be trade requests, quarterback battles, or impressive rookies, there’s plenty to choose from. Let’s not forget that we officially had our first game of the pre-season as well. So just like I did last week, I’ll give you a quick recap on some of the top training camp stories of the week.

The first preseason game has come and gone but all it did was leave us with some uncertainty for certain players. One guy that you shouldn’t be worried about is Zamir White. He was impressive during the preseason matchup against the Jaguars rushing for 52 yards and tacking on three receptions, and has received positive reviews during training camp. While he may not be at the top of the running back depth chart, he has a very good chance to become the backup option to Josh Jacobs. A few more positive reports then there’s a good chance Zamir White could be one Josh Jacobs injury away from a fantasy steal.

Keeping with the theme of rookies impressing during training camp we have Romeo Doubs. Receiving praise from Aaron Rodgers of all people is newsworthy on its own. Thanks to Christian Watson’s injury Romeo Doubs has been given the opportunity for more quality snaps with Aaron Rodgers. There have been countless training camp superstars over the years, but Romeo Doubs could actually make the most of things. This Packers team is lacking a true number one wide receiver. The hope was that Christian Watson could fill that role. If the positive reports for Romeo Doubs keep coming, then he could very easily be the top wide receiver for this team.

I wish I could say things are heating up with this next update, but that’s not really the case. Kenny Pickett has reportedly had an up and down training camp. He believes he’s improving which I would agree with especially given how mediocre he was at the start of training camp. However, this progress was not enough for the Steelers. Mitch Trubisky currently sits at the top of the Steelers’ depth chart. Things may change throughout the rest of training camp and after some preseason games. As of right now, the Steelers quarterback battle seems to be over. However make no mistake about it, the second Mitch Trubisky has a bad game Pittsburg will erupt with chants to start Kenny Pickett.

Time to report on another battle, but one of a different kind. Two contenders aim for their rightful spot amid the top of the Texans’ running back depth chart. Marlon Mack has reportedly shown flashes of his 2019 form. Next is Dameon Pierce and he’s reportedly also looked impressive during training camp. Currently, Marlon Mack sits atop of the depth chart but by no means is this one set in stone. The Texans still have a lot of training camp and preseason games to watch. This battle could very well go on until right before the season starts. My money is on this being a bit of a split backfield to start things off until one of these guys emerges as the clear-cut front runner.

Kareem Hunt has officially requested a trade from the Cleveland Browns. Unfortunately for him, the Browns denied that request almost immediately. This then prompted Kareem Hunt to sit out of training camp in the hopes that this might change the hearts and minds of the Cleveland higher-ups. That also did not work as he only sat out of camp for two days before returning to the team. This seems like a mistake by the Browns to not even entertain the idea of trading Kareem Hunt. D’Ernest Johnson proved to be a pretty good backup running back last season, and trading Kareem Hunt to a team in need of a solid running back could help recoup a little bit of the king’s ransom they gave up in order to bring Deshaun Watson to Cleveland.