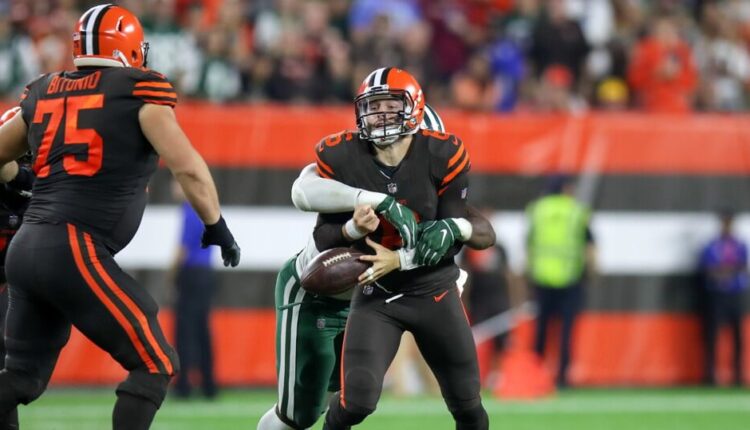 There has been a flurry of moves this offseason as teams try to replicate the success that the Rams and Bengals achieved after being aggressive last offseason. Some big quarterback trades have shaken up the fantasy quarterback landscape heading into the 2022 season, and even quarterbacks who’ve stayed put have seen changes to their receiving corps. Here are the biggest free agency losers at the quarterback position.

The future remains very much uncertain for Baker Mayfield following Cleveland’s trade for Deshaun Watson. The Browns are reportedly not looking for a first-round pick in exchange for Mayfield, but even with a lower asking price, there are few teams in need of a quarterback now with Matt Ryan having been traded to Indianapolis. Carolina has been meeting with incoming rookie quarterbacks, and Seattle may be willing to test the waters with Drew Lock in 2022. Even if Cleveland were to release Mayfield, there’s no guarantee of a starting job for him this coming season. From a dynasty perspective, Mayfield is clearly one of the biggest free agency losers at quarterback. He may provide zero fantasy production in 2022, and he may not be a starting quarterback in the NFL going forward in the long run depending on how this offseason plays out.

Losing his no. 1 receiver with the Packers having traded Davante Adams to the Raiders deals another blow to Aaron Rodgers‘s already waning dynasty value. Rodgers will turn 39 this year, and his current receiving corps under contract is headlined by Allen Lazard, Randall Cobb, and Amari Rodgers. Even assuming that Green Bay will use one or both of their first-round picks to add a receiver, Rodgers’s surrounding cast will inevitably be worse heading into 2022 without Adams. He is also notorious for needing time to build rapport with his wide receivers, so any incoming rookies would face an uphill battle to immediately contribute. Rodgers is a talented enough quarterback to still finish as a top-12 fantasy option even with a less-than-stellar receiving corps, but elite production is tough to project for 2022, and his dynasty value will only continue to decline as he nears the age of 40.

It’s never a good sign when a young quarterback is already on his third team before the age of 30, and the recent trade to Washington makes Carson Wentz among the biggest quarterback free agency losers. The fact that the Colts were so willing to move on from Wentz this offseason without a viable replacement at the time after having just traded a first-round pick for him a year ago is telling. His 2020 performance was lackluster, but more importantly, Wentz’s “lack of leadership” and “reckless style of play” caused rifts off the field. Behind a worse offensive line in Washington, there’s risk that Wentz won’t even finish out the 2022 season as the starter. In that scenario, his already-low dynasty value would completely evaporate, making him a risky asset with little long-term value in dynasty.

In 2021, Dak Prescott delivered an impressive performance as the no. 11 fantasy quarterback in points per game in his first season back from the gruesome broken ankle. However, while Prescott remains a strong real life franchise quarterback for Dallas, it may be difficult for him to deliver consistent fantasy production this coming year. For one, he was one of the least-pressured quarterbacks last season, and Dallas lost right tackle La’el Collins and left guard Connor Williams this offseason. Prescott also lost a top receiver with the Cowboys having traded Amari Cooper to the Browns. While Dallas re-signed Michael Gallup, he’s coming back from an ACL tear, and his status is uncertain for Week 1. With a depleted receiving corps and turnover on the offensive line, there’s reason to believe that Prescott could struggle a bit more in 2022.

To be clear, there’s no need to panic on Patrick Mahomes in dynasty, as he’s a proven elite player at the quarterback position. Still, the Chiefs having traded Tyreek Hill to the Dolphins this offseason makes Mahomes among the free agency losers at quarterback and is some cause for concern. The threat of Hill’s speed and presence undoubtedly helped open up Kansas City’s offense, allowing for other receivers to operate underneath with added opportunity to create yards after the catch. Although the Chiefs are sure to replenish the position via the draft in April, it’s unclear how quickly any rookie receivers can make a significant impact on offense to mitigate the loss of Hill. Long-term, Mahomes should still be viewed as a top dynasty quarterback, but his 2022 fantasy production is unlikely to be elite and could be more volatile from week to week.