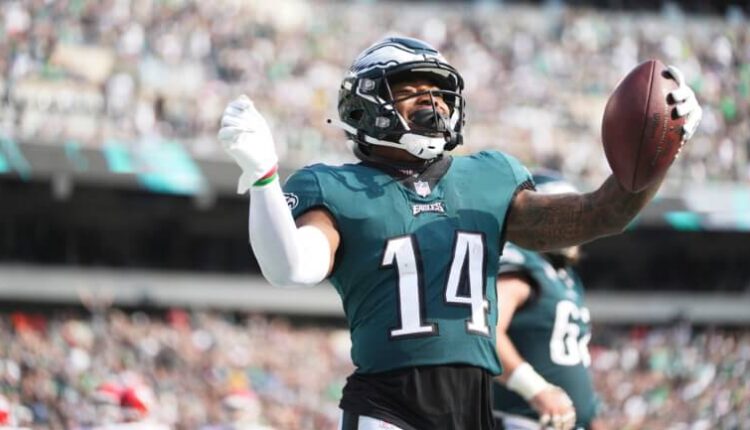 A ton of hype is generated for players during the draft process and around training camp. Fans are always eager to see if a player’s success in college can translate to the NFL. For some athletes like Ja’Marr Chase, Javonte Williams, and Kyle Pitts, that success comes right away. Others take a little longer to get themselves acclimated to the change of speed and intensity. Some players come into the league in less than stellar shape, while some simply find themselves in situations that are less than ideal. Whatever the reason, these players did not meet the hype but may have shown flashes of what their potential could be in the league. Here we will highlight four sophomore breakout candidates for the 2022 fantasy football season.

Sorry, Kenny Golladay, there is a new Kenny G in town. Quite frankly, after the season Golladay just put up I have no problem transferring over the nickname to the talented RB out of Philadelphia. In his second year, Gainwell is definitely a breakout candidate. I have previously mentioned that the Eagles may be a backfield to avoid in fantasy this year. A lot of that has to do with the uncertainty of everyone’s role. The Eagles deploy a running back by committee, which is evidenced by Jalen Hurts’ 139 rushing attempts, Sanders’ 137, Scott’s 87, Howard’s 86, and Gainwell’s 68 carries last season. If I were a betting man (and I am) I’d put my money on Gainwell to lead this RB unit in touchdowns this season.

While Kenny trailed in the carry department, he outpaced his running mates in the receptions category. His 33 catches on 50 targets was only 7 more than Sanders’ 26 catches. However, Gainwell crushed Sanders in receiving yards with a whopping 253 to 158. A big reason that I believe Gainwell will overtake Sanders is Kenny’s nose for the end zone. Gainwell recorded 5 TDs on the ground last season. What’s rare is that he never needed more than 12 carries to get it done. He is not the type of back that requires a ton of volume to have success; he’s efficient with the carries he receives. It makes sense that there are rumors stating that Gainwell will be used in “high-leverage” situations this year. If he’s able to steal third down and goal line work away from Sanders then Kenny G should be in for a very fruitful season.

Last year’s preseason darling, Rhamondre Stevenson, was never truly “unleashed” in the Patriots’ offense. Instead, he found himself on the lesser end of the early down split between himself and Damien Harris (202 versus 133 carries). As with any Patriot rookie running back, Stevenson took a while to earn the trust of head coach Bill Belichick. He played in only 7% of snaps in Week 1 against the Dolphins. Rhamondre did not see the field at all in Week 2, Week 3, or Week 4. Apparently, the coaching staff saw something about his pass protection that they didn’t like. Fortunately for Rhamondre, he seemed to remedy those concerns and was awarded 11 attempts in Week 5.

Rhamondre was able to flash his breakout potential in two games last season. In the Week 10 shellacking of the Cleveland Browns, Stevenson toted the rock 20 times for 100 yards even and a pair of rushing touchdowns. Week 17 was almost identical as he carried the ball 19 times for 107 yards and another two touchdowns. Now that Rhamondre has earned the trust of the coaching staff, he should immediately be in line for a lot more work alongside Harris. Harris battled through plenty of injuries last season. The addition of Rhamondre as a fixture in the rotation should benefit them both.

This was 3rd in the NFL amongst players with over 120 att.
(Via @FTNFantasy) #FantasyFootball pic.twitter.com/wGoj2DvCKr

The Hall of Fame Game was not a good start for the Jaguars. I still believe that Trevor is a rock-solid breakout candidate for this season. Besides, he didn’t play a single snap in that game. I’m not sure we can hold Lawrence’s lackluster rookie season against him. He had, which has the potential to be one of the worst head coaches in NFL history. Urban Meyer was let go just 13 games into his tenure as an NFL head coach. You know it’s bad when a player files a lawsuit against the coach. According to The Athletic’s Daniel Kaplan, the Jaguars filed a legal motion in May to dismiss kicker Josh Lambo’s lawsuit, which sought for the Jaguars to pay his $3.5 million salary from 2021 plus damages.

The Meyer era (or rather blip) is now over and everybody can start healing. According to the players, Meyer’s replacement Doug Pederson has been a complete 180 from they endured last season. Things seem to be changing in Jacksonville. There are a lot of new faces in town that can help Trevor break out. For starters he gets his college running back in Travis Etienne. Etienne was forced to miss his rookie season due to a foot injury. News out of Jags camp is all positive for Etienne, most noting that he looks very explosive. Adding to the team’s explosiveness is newly acquired WR, Christian Kirk. Thus far Laviska Shenault has not panned out to be the player that most thought he could be, which led the team to look elsewhere. It was important for the Jags to provide Trevor with a young WR that he can grow with.

The Jags want Lawrence to succeed so badly that they didn’t just stop at the addition of one new WR. They went out and grabbed sleeper tight end Evan Engram. Lawrence is no stranger to throwing to his tight ends. In fact, his tight ends combined for 108 targets last season. Those targets should now become more concentrated thanks to Engram’s clear-cut talent over the rest of the TE room. With the new coaching staff and offensive weapons, it is difficult not to envision a sophomore year breakout from Trevor Lawrence.

With Marquise “Hollywood”/ “Criminally Fast” Brown being traded to Arizona, one thing is very clear; the Ravens will be relying heavily on Mark Andrews and Bateman to carry the passing attack. Although he only played in 12 games, Bateman still led all current Raven WRs in targets (68), catches (46), and receiving yards (515). With the lack of proven talent behind Bateman in the WR room, it is not a reach to suggest that Bateman will end the season north of Marquise Brown’s 146 targets from last season.

Breakout candidate Rashod Bateman will have to produce in a big way, and according to Kyle Barber of the team’s website, Bateman has been lining up at different positions on the field. Possessing the ability to line up at different spots on the field is always a good thing for a receiver. This puts the offensive coordinator in the position to exploit plus matchups. Finally playing with a healthy Lamar Jackson, Bateman has had plenty of time this offseason to develop a rapport with his franchise quarterback. Hollywood’s absence should leave Bateman with his downfield targets in addition to the underneath and intermediate targets he was already racking up.

Peep the shoulders, even plane and ball placement benefits from. pic.twitter.com/QLwDfNcrrL

What’s your take on Reese’s Second Year Breakouts? Let us know in the comments below and then head on over to our full 2022 Fantasy Football Draft Kit for more great analysis!