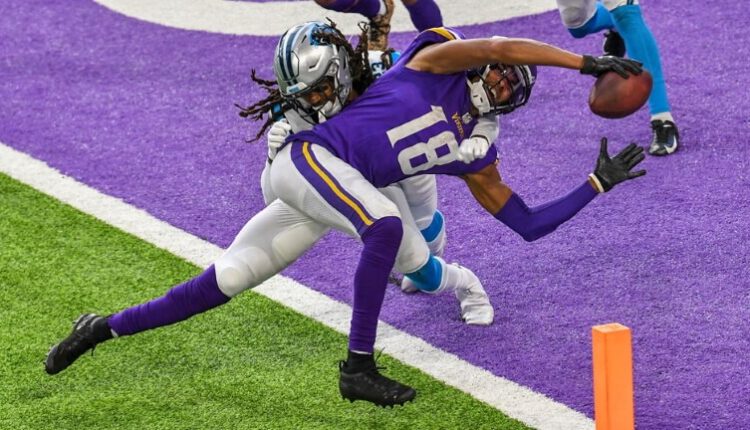 Your league’s fantasy draft is right around the corner. It is important to get off to a hot start and hit on your early picks. The guy you draft 1st should set the bar that you want your later picks to meet. No matter how many mock drafts you do, your actual draft hardly ever seems to pan out the same way. This mock draft intends to think outside the box a bit in order to prepare you for anything. This mock is designed for half-point per reception, 12-team leagues. Without further adieu, 2022 Fantasy Football Mock Draft 1.0.

This pick is pretty obvious. There is no need to overthink this one. Jonathan Taylor is an absolute BEAST. Rushing for 1,811 yards last season, he is well-deserving of being your first round pick.

CMC is going to get drafted number one overall in a good chunk of leagues this year, just you watch. If it happens in your league, go buy a lottery ticket, and go draft Jonathan Taylor. In .5 ppr leagues it’s almost justifiable to take him first because of his elite pass-catching abilities, but the injuries are a concern for me and should be for you as well. On the other side of the coin, “You gotta risk it to get the biscuit.”

First in WR fantasy points (294.5) , first in TDs (16), first in receiving yards (1,947). Cooper Kupp is that dude. Guaranteed to be the first WR off the board this year, it might be the smart move to take him here to gain a positional advantage over your league-mates.

The name of the game is half point per reception, which makes Austin Ekeler look really friggin’ good at the four spot. The fact that Ekeler catches passes at a high volume and Derrick Henry certainly doesn’t is the main reason you take him here instead of the King.

Another reason you might take Ekeler at number four instead is the fact that Derrick Henry is just coming off of a foot injury. You can’t play football without your feet, because then it would just be ball. It Just so happens that’s exactly what the King does, he balls. I have no qualms with anybody that wants to take him here. I just would not advise doing it any sooner.

News all offseason seems to indicate that the Steelers want to use Najee Harris less. Well, let me be the first to tell you, that ain’t happening. With Big Ben finally deciding to hang it up, the Steelers have two options at QB; rookie Kenny Pickett, or Mitchell Trubisky. Translation, the Steelers are going to be relying on Harris now more than ever.

There goes your league-mate going after that positional advantage again. Drafting in the seven slot, your next pick would be too late to get Kelce. Some might call it a reach, but Kelce is the only surviving top option for Patrick Mahomes. The two of them have made sweet music in the past, now they’re all they’ve got.

There probably aren’t any more league-winning RBs left on the board, but there sure are some league-winning WRs. A small run of WRs starts here with Ja’Marr Chase, who enjoyed a breakout rookie season alongside his old college QB, Joe Burrow.

Another LSU Tiger. Justin Jefferson and Ja’Marr Chase are pretty close to being interchangeable at this point of drafts. Chase gets the slight edge only due to his QB situation.

Sure, Derek Carr is no Aaron Rodgers, but talent is talent and Davante Adams is overflowing with it. Honestly, Carr gets a pretty bad rap for no good reason. It might seem like every time you watch the Raiders play, Derek Carr is fumbling the ball out of the back of the end zone. But what you don’t see is his leadership skills and toughness in the pocket. Once college teammates, Carr and Adams ideally will be able to pick up where they left off.

Talent is talent and speed is speed. The general public seems to be in agreement that Tua’s arm is too weak to hit Hill downfield. Hill doesn’t seem to agree, and at this stage, I’m willing to take his word for it. “I just want people to understand that I went for 150 [yards] with Matt Moore as my QB versus the Minnesota Vikings… I love Matt Moore, but Tua T is ten Matt Moores.”

On paper this offense looks like it has top-three potential. It makes sense that Joe Mixon stands to benefit from that. Deep balls to Chase and Higgins led to a ton of red zone opportunities for Mixon last season. A full offseason of prep for Joey B and the gang should equate to more of the same.