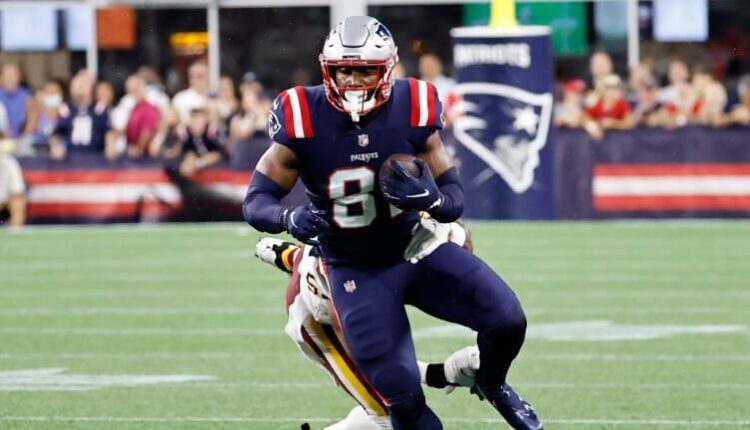 Tight ends like Cole Kmet and Albert Okwuegbunam are being discussed as late-round options at the position, but let’s take a look at three deep sleepers at tight end that are going undrafted in most leagues. The tight ends listed below should be targeted more so in best ball formats and in deeper leagues with 14 or more teams, but each has a higher fantasy ceiling in 2022 than many are projecting.

Turron Davenport at ESPN recently reported that Austin Hooper has “made it his personal mission to develop chemistry with Ryan Tannehill” during training camp and that “the two have put in extra work during downtime in practice”. Davenport also noted that Tannehill has targeted tight ends on 24 percent of his throws since he became the starter in Tennessee and has thrown 33 percent of his touchdown passes to the tight end position over that span. Prior to signing with Cleveland, Hooper logged career-highs in receptions, receiving yards, and touchdowns in 2019, his final season in Atlanta. That year, Hooper also ranked seventh in yards after the catch (YAC) and 13th in yards per route run (YPRR). With A.J. Brown traded to Philadelphia, Robert Woods working back from an ACL tear, and rookie Treylon Burks being eased in, Hooper could see the most targets in 2022 since his final year in Atlanta.

According to Zak Keefer of the Athletic, rookie Jelani Woods and sophomore Kylen Granson have struggled in training camp thus far, and Mo Alie-Cox has been the “only reliable tight end”. Michael Pittman established himself last year as the clear no. 1 target in Indianapolis, but the target competition is open behind him. Third-year wide receiver Parris Campbell has yet to stay healthy for an entire season, and rookie Alec Pierce is still unproven despite the Colts’ high hopes for him. Alie-Cox has a chance to carve out a role in this passing offense, particularly in the red zone. Speaking of Hooper’s accomplishments above, his quarterback in 2019 was none other than Matt Ryan, now the newly-acquired starter in Indianapolis. Over the last three years, Ryan’s starting tight end has ranked fourth, ninth, and sixth in targets at the position, and Alie-Cox could see career-highs in receptions and touchdowns in 2022.

Last offseason, the Patriots signed both Hunter Henry and Jonnu Smith, but Henry was the one who established himself as a top red-zone target. In 2021, Henry ranked seventh in red-zone targets among tight ends with 20, whereas Smith saw just 10 red-zone targets. However, all nine of Henry’s red-zone receptions went for touchdowns, whereas Smith scored just once on his five red-zone receptions. Their touchdown rates should both regress to the mean, which should result in fewer touchdowns for Henry and more scores for Smith in 2022. Smith was also the more efficient receiver of the two, as he led all tight ends in targets per route run (TPRR) last season and ranked seventh in YPRR, and he’s been the team leader in targets thus far in camp. There’s a non-zero chance that Smith, currently going undrafted, could outscore Henry, whose current ADP is in the 12th round, this season despite their massive gap in ADP.

Got a few deep sleepers of your own? Drop some names in the comments below and then head on over and check out the rest of our 2022 Fantasy Football Draft Kit!