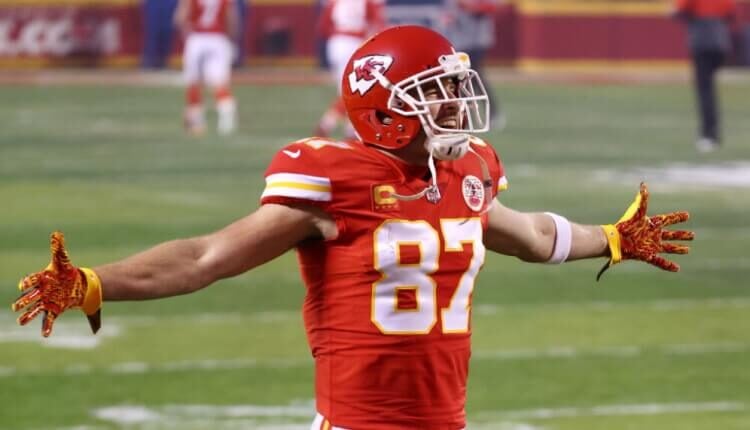 In recent memory, the tight end position in fantasy football has been extremely top-heavy. There are always a few elite options and then it quickly turns into a wasteland of dart throws. Is it any different in 2022? To answer just that question, we gathered six of our top analysts together to compile our 2022 consensus tight end rankings, discuss their strategy for the position, and hit on their favorite tight end values. Enjoy!

Draft Strategy for the Tight Position

Before we get to the tight end rankings, we thought it would be helpful to introduce you to our analysts and share their thoughts on how to approach the position in your upcoming drafts.

Travis Kelce is the only sure thing at tight end in fantasy football. There are a handful of options I would feel good about as a weekly starter, like Mark Andrews or Kyle Pitts, but I don’t think I’ll invest the draft capital to land them. I’m probably not selecting my starting tight end until the 6th-Round at the absolute earliest. A total of 27 wide receivers and 18 running backs scored more total points than the overall TE3 last season. The season prior, 34 receivers and 22 backs scored more than the 2020 TE3. The bottom line is most of your league will be scrambling for a startable tight end. My advice is to analyze each player’s weekly volume, touchdown potential, and, above all, find a tight end on a team that lacks a consistent WR2.

A tight end to keep an eye on for the 2022 season is a newcomer to the Tennessee Titans, 27-year-old Austin Hooper. Some key off-season departures from Tennessee include receivers A.J. brown, Julio Jones, and tight end, Anthony Firkser, who all combined for 38% of the team’s targets in 2021. I doubt rookie, Treylon Burks, and Robert Woods, returning from an ACL tear will command the entirety of those vacant targets. Hooper had a 2019 stat line of 75/787/6 in just 13 games. He’s no stranger to a heavy workload and is free at this point in 2022 drafts.

I’m begging you. If you don’t get a chance to draft Travis Kelce, Mark Andrews, George Kittle, Kyle Pitts, or Darren Waller, then just punt the position. Accept the fact that you’re going to spend the season on the waiver wire searching for a tight end each week. It’s ok. The rest of your team will be solid. Every team has a weakness, and quite frankly, this is the best position to be weak. The difference between the TE6 (currently Dallas Goedert for me) and the TE15 (currently Mike Gesicki for me), isn’t that wide in terms of projections.

My favorite value in the position is Evan Engram. He was in the 99th percentile for speed, catch radius, and pretty much every other metric you can think of for his position when he first came into the league. His biggest problem is poor blocking (you don’t get fantasy points for that), and an inability to stay healthy. Now he’s in Jacksonville to be Trevor Lawrence’s security blanket on a team that’s built for speed. He’s my TE16, and with an ADP of 163, you might not even have to draft him if you get lucky. Don’t force this position.

It is always tough to know when to take a tight end. Once the three or four elite options in the tight end rankings go in the first couple of rounds, the drop-off is terrible. It depends on where you are picking in your draft. If you have an early pick, it is smart to grab a top tight end third pick on the turnaround. If you have a late or middle pick, it is best to just play the board by ear. I don’t think I would take a risk on Kyle Pitts with my third or fourth pick if Diontae Johnson, Breece Hall or Cam Akers are still on the board.

When it comes to value after the drop-off the tight end position isn’t far off on points per game. Mike Gesicki is a solid pick in the later rounds or even Robert Tonyan with Davante Adams gone. But, I wouldn’t stress about grabbing a tight end if you can’t snag Tavis Kelce, George Kittle, Darren Waller, or Mark Andrews. It is best to stream tight ends in the early season to see who is getting targets.

The comparison of the TE position to relief pitchers in fantasy baseball has become more frequent in recent years. Based on my experience with both football and baseball, I find that many people treat these two similarly in terms of their roster construction approach. In baseball, there are people who believe drafting elite closer Josh Hader early saves them a lot of headaches later when it comes to chasing saves or having to punt them altogether. Same goes for tight ends in fantasy football. I have listened to people tell me that they must draft Travis Kelce or Mark Andrews in round 2 or 3. If not they think they will be singing the blues on the waiver wire as they scrounge for scraps all season long.

Those scraps, however, may be diamonds in the rough. This season I see at least 5 tight ends who could finish as the number one player at the position in 2022. All 5 are outside my top 4 of Andrews/Kelce/Kittle/Waller and could be had anywhere from round 7 to round 12! The best value of them all is Albert Okwuegbunam. One move made off the field drastically improved Okwuegbunam’s value for 2022: the trade that brought Russell Wilson to the Broncos and sent starting TE Noah Fant away to Seattle. Even with a weak passing game in 2021 Okwuegbunam tied for the third-best target rate per route run (23%). His 169 ADP in PPR leagues so far is a golden opportunity that you should not pass up!

As with wide receivers, there are only a few elite tight ends slated to see 25 percent or more of their team’s target share and then a bevy of usable options behind the top tiers without elite ceilings. The two paths to fantasy production for tight ends are target volume and touchdowns. Tight ends on bad teams shouldn’t be avoided if the defense is likely to force the offense into potential shootouts. Don’t be scared to draft touchdown-dependent tight ends either. Even with inconsistent production from week to week, the first step to fantasy success is accepting that tight end production is inherently inconsistent, so it’s worth drafting tight ends with high ceilings due to touchdowns even if they have some down weeks.

A couple of late-round tight end options who could see high target volume are Cole Kmet and Evan Engram. Both are on teams with poor defenses, which should increase the rate at which their offenses will need to pass. Their teams also lack talent at the wide receiver position, so there’s greater opportunity for Kmet and Engram to carve out larger target shares and see volume. If going the touchdown route, Robert Tonyan is a great value at ADP. With Davante Adams now in Las Vegas, Tonyan could become a primary red-zone target for Aaron Rodgers, as he has been in the past when Adams has missed time. And finally, it could be worth drafting Rob Gronkowski in the last round, as his retirement could be as brief as Tom Brady’s was.

This is one position I never stress when it comes to drafting. Though Kittle, Kelce, and Andrews have put up great numbers, I always target the next tier as I feel there is better value. Reaching on a TE is a big no-no. Stacking a TE with his QB can bump up the value if it falls that way, but this position has a significantly less impact than that of the RB and WR you can get in rounds 4-6.

This year there is one TE in particular that I have been eyeing in the later rounds and that is Robert Tonyan. With Allen Lazard slated as WR1, Tonyan may become the favorite target for Rodgers this season. Regardless of limited options in the passing game, Tonyan should see an uptick in production.