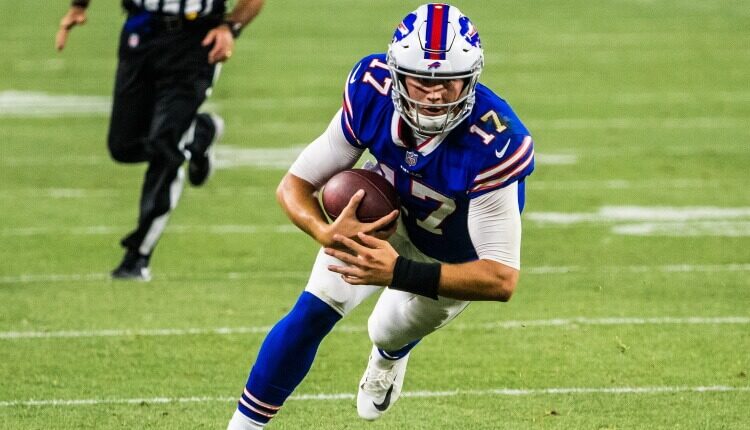 Wanna know how your fantasy football league is gonna handle the quarterback position? One set of expert rankings is not gonna do the trick. You’re gonna get a better feel for the position with a balanced set of QB Rankings that take into account the different views from a variety of people. With that in mind, FantraxHQ gathered six of our top analysts to help build a set of consensus quarterback rankings for the 2022 fantasy football season.

Draft Strategy for the Quarterback Position

Before we get to the quarterback rankings, we thought it would be helpful to introduce you to our analysts and share their thoughts on how to approach quarterbacks in your upcoming drafts.

The difference between the QB1, Josh Allen, and the QB10, Matthew Stafford, from last season, on a points per game basis, was just 4.16 points. A player like Allen can single-handedly win you your week from time to time. His rushing production is justifiably highly sought after. However, to maintain season-long success, I’m going to spend my earlier picks on top running backs and wide receivers; positions I need a quantity of quality options at to maintain a strong lineup for the duration of the season. Most teams will only draft one quarterback. Once they do, you’ll have less competition for the remaining, and still worthy, options that are left. All that said, it may be time to make the switch to a 2-QB, or Superflex format, given the depth of talent at the position. The value of quarterbacks in the NFL isn’t properly reflected in 1QB fantasy football leagues.

Kirk Cousins isn’t in high demand, can be had later in drafts, and, I think, has a lot of value ahead of the 2022 fantasy football season. He’s finished as QB11 in total points the last two seasons. The Vikings also brought in former Los Angeles Rams offensive coordinator, Kevin O’Connell, as their new head coach. That should boost the passing offense’s production. Lastly, he’s got his usual weapons in Justin Jefferson, Adam Theilen, Dalvin Cook and others to spread the ball around to. I think Cousins can crack the top-10 this season.

As the game changes to a more spread/air attack style offense, the value of fantasy QBs expands with it. I tend to wait until the 5th round or later to draft my starting QB. Sure… there are elite players at every position that you won’t feel bad about drafting in the first round like Josh Allen or Lamar Jackson. However, scarcity of value is the name of the game. It’s harder to find elite/consistent running backs in later rounds, so I like to sure up those positions earlier.

My top value at the QB position is Tua Tagovailoa. He’s my QB12 on the year, at present, and his consensus ADP is 118. He’s got new weapons, a new offense that’s more suitable to his talents, and this is probably his last year to show that he’s an NFL starter. I think as preseason heats up, his ADP will get higher, so make sure you don’t wait too long to draft him.

Quarterback is a tricky position when it comes to knowing when to take one. I feel there is no need to draft a quarterback any earlier than with your sixth-round pick. Josh Allen and Justin Herbert are tough to pass up, but at the same point, all you need is a quarterback to average 20 to 25 fantasy points per game for you. Last season, Kirk Cousins who mostly went undrafted, averaged 19.21 fantasy points a game. Allen averaged 24.56 fantasy points per game. That five-point difference isn’t that big of a stretch when you can stack up on more important positions like running backs and tight ends. Just remember in most leagues it is a 1QB format, so why spend an early-round pick on a quarterback and miss out on filling out your roster with running backs and wide receivers.

Derek Carr will be the biggest steal this year. Last season Carr had an underwhelming fantasy season, but he didn’t have his top target in Darren Waller most of the year. Now, he will have his former college teammate, Davante Adams along with a healthy Waller and up-and-coming slot receiver, Hunter Renfrow. This is Carr’s best-receiving core yet and will be a league winner at his ADP.

The 2022 quarterback rankings have loads of quality options. Depending on your format, you could be very patient and wait on a starting signal-caller until the 9th round in the draft. Kirk Cousins is an example of a QB to wait on who will end up being a top 8 player at the position. The depth is outstanding this year. I found myself getting excited about QBs ranked in the upper teens and early 20s of my positional rankings. These are players who can start for a 12-teamer.

My general plan for drafting QBs has everything to do with relativity to other positions in addition to the league format I’m drafting for. The depth at QB isn’t as strong as WR, but typically I need more WR to fill out my roster than QB. Pouncing on RB and WR earlier in the draft leaves me the option to get the QB I want later. That guy, who I consider the best QB value in the draft, is Trevor Lawrence. He’s going around pick 131 overall. His passing options are more plentiful than his rookie year, but running more in 2022 is what will unlock his potential. Doug Pederson will help remind everybody why Lawrence was a generational QB prospect.

There’s no need to draft a quarterback earlier than Round 6 or so in most 1QB formats considering the depth at the position. Yes, players like Josh Allen and Lamar Jackson are high in the quarterback rankings and very safe options with a high weekly floor and ceiling, but the opportunity cost is too great at their current ADPs. There are simply too many strong options at the other positions to spend that selection on a quarterback considering the serviceable quarterbacks going many rounds later. Drafting an Allen or Jackson likely means missing out on players with league-winning upside like Cam Akers, Travis Etienne, Courtland Sutton, Marquise Brown, or George Kittle.

The biggest steal right now is Trey Lance, who offers similar rushing upside to Jalen Hurts and is likewise surrounded by playmaking pass-catchers. And yet, while Hurts’s ADP is in Round 6, Lance is available three rounds later (more on Lance here). Justin Fields and Derek Carr are also values at their current ADPs. Yes, the Bears are a bottom-5 team, but that shouldn’t drop Fields this far in ADP, as he finished as a top-12 quarterback in fantasy in four of his last five starts in 2021 after Chicago finally let him run more. As for Carr, he passed for over 4,800 yards last year even without much help at receiver but lacked touchdowns. That should change with the addition of Davante Adams (more on Carr here).

Getting the timing right for drafting a QB is often what makes or breaks one’s season. The value isn’t there to reach on guys like Allen, Mahomes, or a healthy Lamar Jackson. However, you won’t win many leagues with Kirk Cousins taking the helm as QB1. There is clear evidence that jumping the gun on the QB might not be the best move, considering all the skill position guys you’d miss out on, and with little parody, waiting for a QB is your best bet as there are quite a few safe options. I typically wait till the dominoes start to fall, but a run on QBs usually happens in the middle rounds.

Heading into 2022 there are a few guys that provide value relative to their ADP but there is one guy who is being overlooked. Dak Prescott ranks as QB10 but could very well end up in the top 3 conversation by year’s end. Though he loses Amari Cooper, he still has plenty of weapons around him and the Cowboys are looking to run with Dak more which could potentially add to his fantasy value. Lance and Carr could be backup plans if you miss on Dak, but Prescott will win someone their league this year.