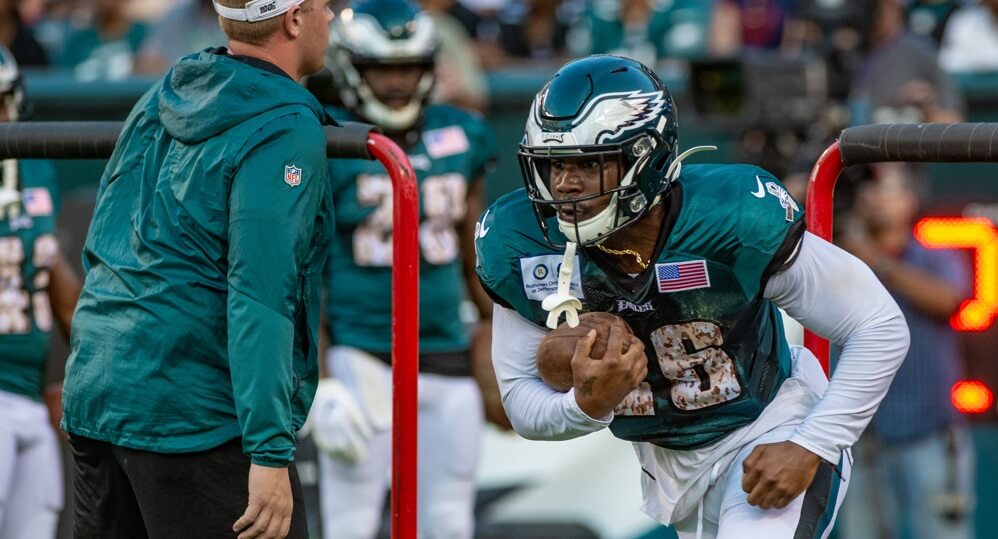 Ahh, the dreaded running back by committee. Nothing grinds my gears more than watching my running back trot off the field only for another running back to punch it in the end zone on the very next play. When playing fantasy football you have to be cautious about selecting a running back solely based on name value or even years past. It is important for you to assess the current situation your running back is in. There are tons of transactions that take place during the offseason. New players are drafted, players are released, some are traded, others retire. You’re playing a dangerous game when you assume that things will be the same as last season. Here we will cover four backfields to beware of and possibly even avoid altogether.

First and foremost, when you’re paying Patrick Mahomes as much money as he’s making, you want to see him throw the football. Non-coincidentally, the Chiefs have not had a running back reach 1,000 yards since the 2017 season when Kareem Hunt ran for 1,327 yards. Here are the Chiefs’ yearly rushing leaders since Patrick Mahomes took the starting job from Alex Smith in 2018: Kareem Hunt (824 yards), Damien Williams (498 yards), Clyde Edwards-Helaire (803 yards), and Darrel Williams (558 yards).

Currently, Clyde Edwards-Helaire sits atop the Chiefs’ depth chart. Hot on his heels is the newly acquired Ronald Jones, followed by Jerick McKinnon, Derrick Gore, and rookie RB Isiah Pacheco. Injuries have been a concern for Clyde early in his career, which forced the team to reach out to RoJo and resign McKinnon. Seeing that these backs have similar skill sets, for the most part, head coach Andy Reid figures to go with the hot hand approach this season. If I had to guess (which I do), I’d say that Clyde and Rojo will split early down work, while McKinnon owns 3rd and long situations. The guesswork and the three backs mixing in are both serious red flags that this is one of the main backfields to beware or avoid this season.

Eagles head coach, Nick Sirriani recently stated that Miles Sanders is “the guy” at the running back position. I don’t believe him, not for a second. And why should I? Sanders didn’t even have the most rushing attempts on his team last season. That accolade belongs to quarterback, Jalen Hurts, with 139 attempts to Sanders’ 137. Hurts also outrushed Sanders 784 to 754 yards. Personally, I think it’s an issue when “the guy” is being out carried and outrushed by the quarterback. If that doesn’t concern you, then try this one on for size. Miles Sanders scored zero touchdowns last season, zero! Not on the ground, not through the air. Meanwhile, his QB saw a ton of success in that category, rushing for 10 touchdowns.

In recent years this has been a team that gives the ball to a host of different backs. Just last season Jordan Howard had 406 carries, Boston Scott had 373, and Kenny Gainwell recorded 291. Last Friday, Sanders was spotted working with the second team offense in camp. In a media session before Saturday’s practice, coach Sirianni had this to say about it,“ Our backs rotate. Those first three backs, Kenny and Miles and Boston, they rotate three plays in and out for the first two sessions of the period. So the period is split into three areas, ones , two’s, and three’s. And those three guys rotate that area.” Hmmm, three backs all getting in work with the first team can only mean one thing. We’re looking at a running back by committee situation here. If that doesn’t scream “backfields to beware”, then I don’t know what does.

Know who agrees with me on being anti Miles Sanders this year?

One look at this Dolphins running back room and you’ll see exactly where I’m coming from. It’s an absolute RB2 graveyard. Chase Edmonds is listed as the starter in the team’s unofficial depth chart. This team was super busy this offseason as they also nabbed Sony Michel and Raheem Mostert. Oh, and Myles Gaskin is still hanging on by a thread in the fourth string slot. The boring names aren’t even the main reason that this RB corps made my backfields to beware list.

For starters, all four running backs have a history of injury. Just last season Edmonds suffered ankle, toe, shoulder, and rib injuries. Mostert suffered a season ending knee injury during Week 1. Sony Michel stayed healthy last season, but he also has a history of knee issues. Lastly, Gaskin was placed on the IR due to an MCL sprain in 2020. I don’t believe that any of these backs can handle the load of a full season. This will lead to other backs being mixed in to keep one another fresh. That lack of identity in the backfield does not sit well with me. I’ll be avoiding this backfield entirely.

There are a couple of reasons that this is a backfield to beware. The Texans have a couple of familiar names in the running back room. Running back sleeper, Marlon Mack had back to back productive seasons before suffering a season-ending Achilles injury in 2020. Former Bronco’s RB, Royce Freeman showed some flashes during his rookie and sophomore seasons. Since both backs are fairly unproven, it stands to reason that the Texans will want to see what they both have. Add Rex Burkhead, the only returning RB on the depth chart, who has a leg up on the playbook and things start to get a little murky. Finally, there’s Dameon Pierce, the rookie drafted in the fourth round. This is a crowded backfield, but there is no clear cut top talent.

If this season resembles the last, then the Texans will be playing from behind, a lot. When a team is down on the scoreboard, especially late in games, they tend to move away from the run game and gravitate towards field stretching passes. Garbage time can be fruitful for certain running backs as the quarterback will typically check down if there is nothing open downfield. Unfortunately, the Texans don’t seem to have a legit pass-catching back on the roster. Until one of these backs separates themselves from the pack, drafting any of these guys is a tough sell.

#Texans RBs look to be a big part of the passing game this year. “If you play running back for us, you need to be able to catch the ball on the outside.” pic.twitter.com/PqyUg7WgeD