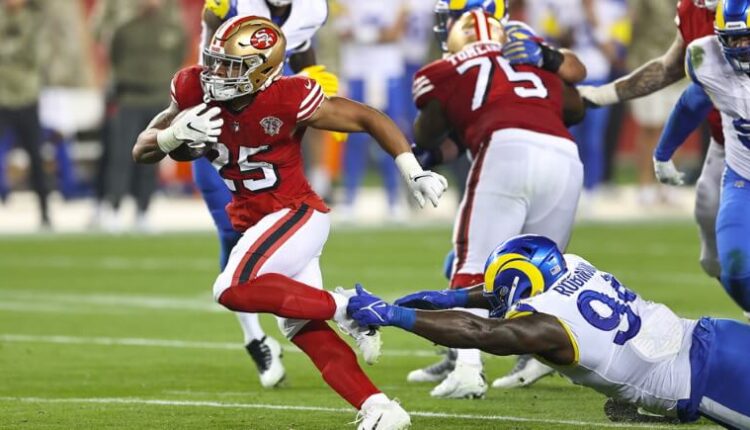 It seems like these days, virtually every running back is in some sort of RBBC (running back by committee). While it makes sense when you’re running an actual football team, it’s a nightmare to deal with when it comes to running a fantasy team. You don’t know who’ll be taking the early downs each drive, who will be getting third down carries, or even goal line touches. We want to help you avoid that trap, so we have a quick article highlighting three RBs that have significant workload concerns this year.

Antonio Gibson is now in his third year in the NFL. In his past two seasons, he’s performed admirably, finishing as RB13 and RB14 in 2020 and 2021. Those are the kind of numbers that would instill confidence and earn you bonafide RB1 status usually. Especially after your first 1000+ yard rushing season. Not in Washington, my friends. Success is foreign for this team, so it’s hard to recognize when they’ve actually made a good personnel decision. Gibson has an interesting story as he was mainly a weapon in college, playing receiver primarily, but making the successful permanent switch to running back in the pros.

With J.D. McKissic obviously becoming Ron Rivera’s favorite 3rd down back, the role of workhorse has never been given to Gibson. It’s not an ideal situation on its own, but it’s manageable. Especially since it’s been the case in Gibson’s prior two seasons and he’s still managed fantasy success. This year is different, however. In the third round of the draft this year, the Commanders drafted Brian Robinson out of Alabama. These days, you don’t draft a running back in the third round or better, unless you want them to contribute. The Commanders have control over Gibson’s contract for the next two seasons, and in 2024, he’ll be an unrestricted free agent. It looks like the Commanders may already have their succession plan in order.

Look…if you think you know who will be the lead running back in a Kyle Shanahan offense, then you’re fooling yourself. Elijah Mitchell busted onto the scene last year and became the lead dog, but that was only after Raheem Mostert was hurt, Jeff Wilson was hurt, and their highly touted rookie running back was benched. You’d think the backfield situation would be more clear now after Mostert moved onto the Dolphins, but it’s far from clear.

The 49ers have had a different leading rusher in each of the past five seasons, without a single back-t0-back leader. It’s chaos. This year, you have Elijah Mitchell listed as the starter. Listed as the backup, you have Jeff Wilson Jr. His best finish in fantasy is RB33 in 2020. Next….you guessed it…the highly touted rookie 3rd round draft pick out of LSU: Tyrion Davis-Price. As we mentioned with Brian Robinson above, you don’t draft a RB with that kind of draft capital if you don’t expect them to hit the field. Last but not least, we have last year’s third round running back who was effectively benched: Trey Sermon. When given the chance, Sermon had a game with 19 carries and 89 rushing yards. Not bad for a 4th stringer. The running back in a Shanahan offense is too valuable to ignore, but I’d be lying if I said I knew the running back to own.

CEH is listed as the starter, but let’s be honest: There’s a reason that the Chiefs went out and signed Ronald Jones Jr. After being relegated to Lenny Fournette’s backup in Tampa Bay, it was clear that RoJo wanted a chance to start again. On a contender, no less. He’ll have that opportunity in KC. As a former 1st round pick, CEH is going into his third year. Not only had he had trouble staying healthy, but he hadn’t had a resounding amount of success on the field when he was healthy. CEH has yet to eclipse 1000+ yards rushing as the unquestioned lead back, or even five rushing TDs in a season.

In fact, during the playoffs last year, it was Jerrick McKinnon who was having success as the lead back, and the Chiefs ran with that hot hand until they were eliminated. With RoJo in the mix, McKinnon, and Gore all having a game or two under their belts to show that they are capable of the lead-back role, it’s CEH who remains the odd man out. I’m not comfortable touching this backfield in fantasy in the slightest.

Got a take on Bradlee’s Workload Concerns? Share it in the comments below and then head on over and check out the rest of our 2022 Fantasy Football Draft Kit.