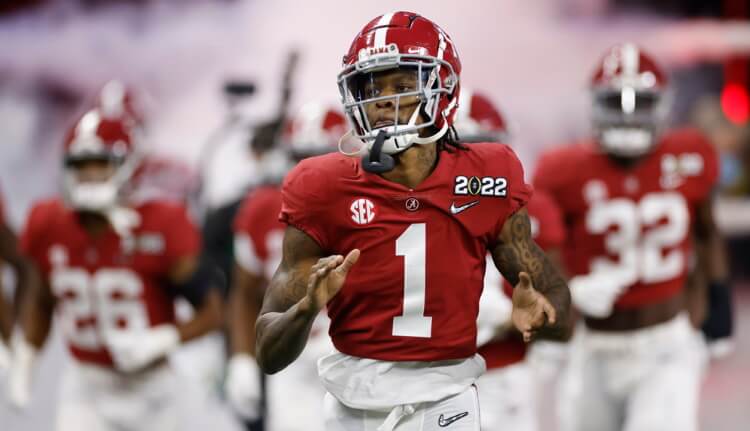 As dynasty GMs prepare for their rookie drafts, they should bear in mind both a player’s overall talent and upside as well as the scheme fit and surrounding offense. These dynasty rookie rankings balance the likelihood of each rookie player in terms of both immediate fantasy production early on in their careers versus their long-term fantasy ceilings. With the 2021 NFL Draft in the books, here are my updated top-36 dynasty rookie rankings assuming a standard 1QB format with PPR scoring (you can find my superflex rookie rankings here).

With a top-heavy running back class this year and a bevy of talented running backs in the 2023 class, who and when to draft at running back is a hot topic. Many are excited about Breece Hall, and rightfully so. Hall is a good runner with the acceleration and speed needed to break long runs, and he’s a great fit for the Jets’ zone-running scheme. But while Hall is my top running back in this class, he’s not my top overall rookie. Although Hall is an able receiver, he’s hardly the dynamic pass-catcher some have made him out to be a la Alvin Kamara or Austin Ekeler. Another worry is that while Hall figures to take the lead role in the Jets’ backfield, Michael Carter is a good runner in his own right and will remain involved, which precludes Hall from an elite fantasy ceiling. These two factors are enough to push Drake London and Jameson Williams ahead in my rookie rankings, both of whom have traits that show elite fantasy upside if they eventually see above-average quarterback play.

Isaiah Spiller and James Cook are two names to look out for in the back half of the first round of rookie drafts or in the early second round. Spiller’s poor combine performance dropped both his NFL and fantasy stock, but his game has never been predicated upon breakaway speed. He has great vision and suddenness to his runs and enough acceleration to blow by defenders for consistent gains, and Spiller is a capable receiver as well. And though Austin Ekeler‘s presence caps Spiller’s short-term usage and fantasy production, he’s in a great situation long-term behind a strong offensive line and in an efficient offense overall with Justin Herbert at the helm. Ekeler will be 27 years old this season, has missed significant time in two of the last three years, and has little dead money remaining in 2023. Spiller should see some change-of-pace work even as a rookie, and he could contribute in a major way sooner rather than later.

As for Cook, the younger brother of Dalvin Cook deserves more hype than he’s getting. There were rumblings of Hall cracking the top tier of dynasty running backs had Buffalo selected him in the late first round of the NFL Draft, and yet Cook isn’t getting much love despite having joined the Bills as a second-round selection. He’s a smooth runner with good vision, but where Cook really shines is as a receiver. Cook is a mismatch for linebackers and can be a downfield threat for big gains as well on vertical routes. It wouldn’t be surprising if he were to immediately win the third-down role in Buffalo, and he’s a good enough runner to earn some early-down work as well. Cook won’t be a workhorse, but even in a committee role on an efficient Bills offense, Cook can be a flex option in PPR formats as a rookie with RB2 upside if Devin Singletary were to miss time.

What about a potential sleeper in the later rounds? Brian Robinson just missed the cut on my top-36 rookie rankings. Robinson is a big, bruising back and not overly fast, but he’s quicker than expected considering his size and a functional receiver as well. He’s unlikely to see immediate playing time in a Washington backfield that’s likely dominated by Antonio Gibson and J.D. McKissic, but both of those running backs have dealt with injuries in the last couple of seasons. Robinson could be a viable fill-in if either were to miss time, and he’s a powerful runner who could see vulture some goal-line touches even when Gibson is healthy. That’s all for now. Good luck in your rookie drafts!

Last updated on Tuesday, May 10th.