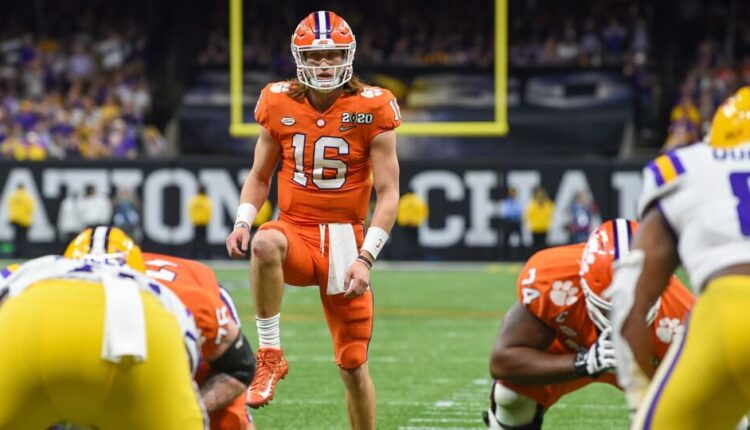 With no NFL Combine this offseason, the 2021 NFL Draft is sure to be full of surprises, perhaps even more so than usual. While landing spots will of course impact these superflex rookie rankings, talent generally overcomes situation in the long term, so pre-draft rankings still hold purpose. Here are my top 12 rookies pre-NFL Draft in a superflex and PPR format (you can find Round 2 here).

Make no mistake, Trevor Lawrence is the best quarterback prospect since Andrew Luck. Rarely do we see true freshmen dominate as Lawrence did in 2018, and over his three seasons at Clemson, Lawrence exhibited excellent accuracy, the ability to make good reads, and great footwork. On top of his skills as a passer, Lawrence possesses speed and athleticism as a rusher, which gives him elite fantasy upside and a high floor. There’s a reason he’s the consensus top pick across nearly all superflex rookie rankings.

So much analysis has focused on Mac Jones‘s lack of mobility, but he’s hardly a statue. An accurate rhythm thrower, Jones makes reads and anticipation throws, has good pocket awareness, and is mobile enough to buy time or scramble for a few yards here and there. With the assumption that Jones is indeed San Francisco’s target at the no. 3 overall pick, as most reports are stating, he’ll have a high floor in Kyle Shanahan’s offense surrounded by a strong run game and a bevy of capable receiving threats.

Quarterback scarcity generally determines the first few picks, but Ja’Marr Chase is simply too good to ignore. Chase still has room to grow in polishing his routes, but he creates separation with elite acceleration, making him an incredible playmaker who provides yards after the catch. With wide receiver prospects from 2020 like Justin Jefferson and CeeDee Lamb holding similar value to Joe Burrow and Tua Tagovailoa, respectively, it’s not crazy to take a fairly high-floor, high-ceiling prospect like Chase this high even in superflex.

Zach Wilson may have the highest ceiling among all the quarterbacks in this class as an anticipation thrower with a penchant for making dazzling off-platform passes and enough mobility to create yards on the ground. However, a forgettable sophomore season and durability concerns considering his smaller frame and injury history also make Wilson’s floor incredible low. It remains to be seen whether Mike LaFleur can recreate a successful offense after coming over from San Francisco, and Wilson will have to make do without any elite receiving options on the roster.

Justin Fields has great accuracy, makes good reads, has a beautiful deep ball, and can add value as a dynamic runner, but he was inconsistent against stronger competition in his final year at Ohio State, though some of this can be attributed to various games missed by his surrounding talent due to COVID. The bigger concern is that Fields is more of a reactionary thrower than an anticipation thrower, but even so, his rushing production would give him a fairly high floor and ceiling in fantasy.

Note: If the 49ers take Fields, he would move up to the 1.02 in my superflex rookie rankings post-NFL Draft, and Jones would move down accordingly based on landing spot.

Najee Harris is a patient, smooth runner who’s elusive in open space, reliable in pass protection, and a strong receiver out of the backfield. He’s built to be a three-down workhorse and may possibly be the only running back in the 2021 class with a truly elite fantasy ceiling. Harris should hit the ground running and be an immediate fantasy contributor even as a rookie, and with whispers of interest surrounding the Steelers, he could be a top-10 fantasy option sooner rather than later.

The talks of Kyle Pitts being a future Hall of Fame candidate may be a bit premature, but it’s understandable why he’s generating so much excitement. A dominant athlete with reliable hands, Pitts is a red-zone weapon and can stretch the field with his speed. As long as he goes to a team that understands his impact role is as a receiver, Pitts should be a clear top-10 fantasy tight end. And if establishes himself as the no. 1 pass-catching option for that team like Darren Waller has in Las Vegas, then Pitts could have an elite ceiling.

The sample size is small for Trey Lance, but he showed flashes of dominance as a dual threat quarterback in his sophomore season at North Dakota State. Lance is a big, fast runner with a great deep ball and rarely turns the ball over, but his inconsistent accuracy due to footwork is an area that needs work. Still, his ability to add value with rushing production gives him a high ceiling, both in the NFL as well as in fantasy circles, especially if Lance goes to a tailor-made situation like New England if they were to trade up for him.

Jaylen Waddle may have an even higher ceiling than Chase if he develops into a precise route-runner. Waddle’s elite acceleration and speed make him dangerous on all levels, and he’s already nuanced enough as a route-runner to create separation on underneath routes and over the middle of the field with defenders terrified of his speed. He can immediately contribute to any offense as a vertical threat and yards after the catch playmaker and has the potential to develop into a top-five NFL and fantasy wide receiver.

It’s very likely that we’ll see an incredible breakaway run for a score from Travis Etienne sooner rather than later, as he’s a one-cut runner with good balance and blazing speed. Etienne has also developed greatly as a receiver, mitigating the concern from a year ago that he might be a two-down back. The final question is his ability to pass protect, but Etienne should see enough third-down snaps to give him a fair floor in PPR formats, and his weekly ceiling is incredibly high with the speed to threaten a long touchdown on any given play.

Rashod Bateman is the most pro-ready wide receiver in the 2021 class with his crisp route-running and fluid movements. While Bateman measured in shorter and smaller than expected, his clean routes consistently create separation, and he was able to win on contested catches despite his height with excellent body control. He can produce as a rookie and be a volume receiver for any offense, though lack of top-end speed could limit Bateman’s ceiling.

One of the few Heisman Trophy winners at the wide receiver position in recent history, DeVonta Smith is an outlier in every sense of the word. There are concerns regarding his late breakout age and durability at the NFL level considering his lean frame and low BMI. However, Smith displayed reliable hands, great route-running, and decent speed, and his dominant 2020 campaign keeps him among the top wide receivers in this class. Don’t discount him too much on account of his metrics, as he still belongs in the first round of superflex rookie rankings.