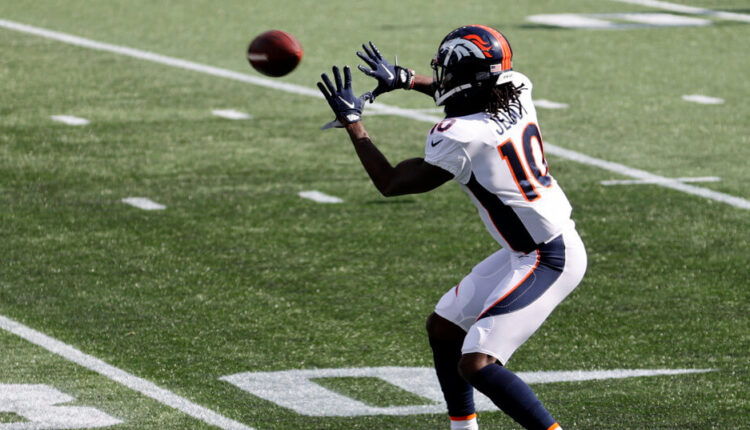 Welcome back for yet another rankings list. Can’t believe we’re already at Week 9, and you’ll notice some wide receivers have jumped and dropped in my Week 9 Wide Receiver Rankings. Michael Pittman Jr. is continuing to climb up in the rankings as Allen Robinson II has completely fallen off in fantasy.

Some good news for owners is Davante Adams will be back this week after a COVID-19 scratch last week. And yet again Cooper Kupp is the best fantasy wide receiver in the league.

Some surprise wide receivers I have that jumped up in the rankings for Week 9 are Pittman and Diontae Johnson. T.Y. Hilton will be out this week with a concussion. While Juju Smith-Schuster is out for the season. Pittman has become the number one target for the Colts and gets to go against the Jets this week. Johnson on the other hand has the Bears this week, who are the fifth-worst fantasy defense against wide receivers. Both are must-starts with a low-end WR1 and high-end WR2.

A little down the list is Hunter Renfrow at 43. Darren Waller is still banged up and hasn’t been himself this year. In other news, Henry Ruggs III is under investigation for a DUI charge that will most likely leave him off the team. Renfrow has been the most consistent PPR receiver for the team and now has a high ceiling going forward. The Raiders will go against the Giants this week in what should be a shoot-out. Renfrow is a high-end flex option this week and has a high touchdown upside.

Lastly, Jerry Jeudy is another wide receiver I love for Week 9. I have him ranked at 22 this week going against the Cowboys. Jeudy finally came back last week after missing the last six weeks. He didn’t have a big game but still caught all four of his targets for 39 yards. The Cowboys are giving up 24.8 fantasy points per game to wide receivers this season. The Broncos will be playing from behind this week so expect Jeudy to see a lot of targets this week.