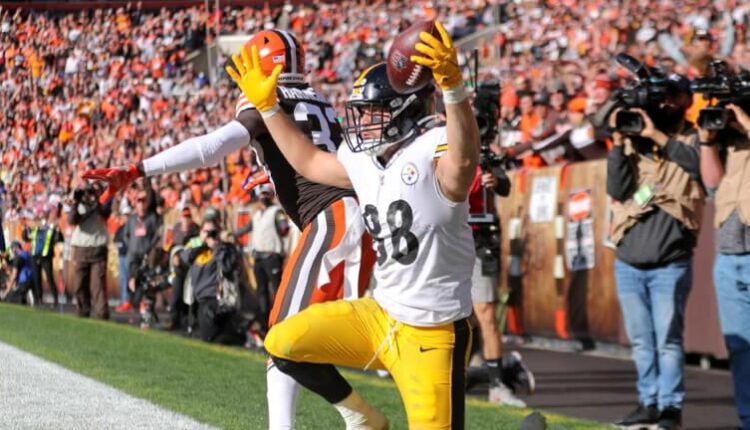 The tight end position continues to be a weekly crapshoot.  Pat Freiermuth finished as the TE1 in Week 8, while lesser-known tight ends Brevin Jordan and Jesse James both scored touchdowns and finished as top-five options.  This week, top tight ends Darren Waller and Mark Andrews return from their bye weeks.  Also, George Kittle could return from the IR.  If he does, he would slot in as a top-12 option in my Week 9 tight end rankings.  Keep in mind, the rankings are based on half-PPR scoring.

Injuries affected a number of players across the league in Week 8.  At the tight end position, Robert Tonyan tore his ACL and will be out for the season.  Marcedes Lewis will likely be his replacement.

Monitor the health status of Noah Fant.  He was placed on the COVID-19 list on Tuesday.  If Fant can’t suit up, Albert Okwuegbunam will operate as the Broncos’ top tight end.

Kyle Pitts had a quiet Week 8, but will likely be the Falcons’ top pass-catcher with Calvin Ridley stepping away from the game for a while.  Hayden Hurst could also see a bump in targets.

Dallas Goedert led the Eagles in targets last week (7) and continues to thrive since  Zach Ertz was traded.  He’ll continue to be a top TE1 rest of season, barring injury.   Goedert gets a favorable matchup this week against the Chargers, who have allowed the fifth-most fantasy points to tight ends this season.

Tyler Conklin is a solid streamer this week.  He’s generally the third or fourth pass-catching option on the Vikings but has seen 12 targets in the past two games.  This week, he faces the Ravens, who have given up the most fantasy points per game to tight ends on the season.

Pat Freiermuth has stepped up in JuJu Smith-Schuster’s absence.  He’s seen seven targets in back-to-back games and scored a touchdown in Week 8.  Freiermuth should continue to get volume in the Steelers’ offense.  I think he’s a back-end TE1 this week and has upside moving forward.

Dan Arnold caught eight of 10 targets and led the Jaguars in receiving yards (68) in Week 8.  He also has 23 targets in the past three games.  Jacksonville will likely have a tough time moving the ball this week against Buffalo, but Arnold could be a nice dump-off option for rookie quarterback Trevor Lawrence.