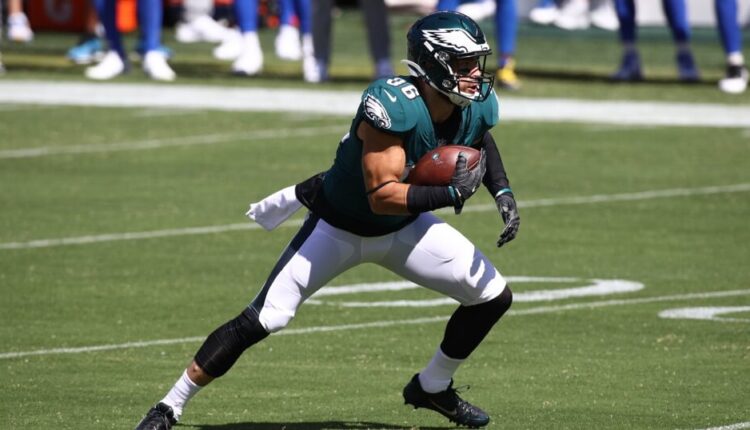 Week 5 was the week of the backup tight end.  David Njoku, Donald Parham Jr, Hayden Hurst, Tommy Tremble, and MyCole Pruitt all scored touchdowns and finished as top-12 options.  Looking forward, bye weeks will be the name of the game, and the absences of Kyle Pitts and George Kittle will have an effect on this week’s rankings.  There’s much to consider, so let’s get to it and take a look at my Week 6 tight end rankings and notes.  Keep in mind, these rankings are based on a half-PPR format.

George Kittle was placed on the IR in Week 5 with a calf strain and will look to return after three games.  Ross Dwelley started in his place but only caught 2 passes for 25 yards.  The 49ers are on their bye in Week 6, but if you need to find a replacement for Kittle, there are better options than Dwelley.

Kyle Pitts and the Falcons are also on their bye this week.  Pitts is coming off his best game of the season, where he caught nine of 10 targets for 119 yards and a TD.  Pitts will look to pick up where he left off in Week 7.

T.J. Hockenson has been hampered by a knee injury that almost kept him out of Week 5.  He ended the day with two catches on three targets for 22 yards.  Keep an eye on his status throughout the week, but if he suits up, don’t expect peak Hockenson.

Dawson Knox continues to rake and has five touchdowns in the past four weeks.  Tennessee allows the third-fewest fantasy points to tight ends, but Knox is still a top-five tight end for me this week.

Dalton Schultz also has a tougher matchup this week against the Patriots.  However, he’s led the Cowboys in targets for two weeks in a row and has three touchdowns in the past three weeks.  I like Schultz as a top-eight tight end in Week 6.

Keep an eye on Dallas Goedert’s status this week.  He was placed on the COVID-19 list on Tuesday, and may not be able to make the short turnaround time for Thursday’s game.  If that’s the case, Zach Ertz becomes a top-10 option in a juicy matchup against the Bucs.

Ricky Seals-Jones caught five of eight targets for 41 yards in Week 5.  He also played on 98.8% of the snaps and garnered 20% of the target share.  Seals-Jones should continue to see a fair amount of work with Logan Thomas on the IR.  He has a plus matchup in Week 6 against the Chiefs and is a solid streaming option.

Hunter Henry led the Patriots in targets (8) in Week 6, and has also scored touchdowns in back-to-back games.  He’s still splitting time with Jonnu Smith but has played more snaps on the season (71% to 55.5%).  Henry gets a favorable matchup this week against Dallas.