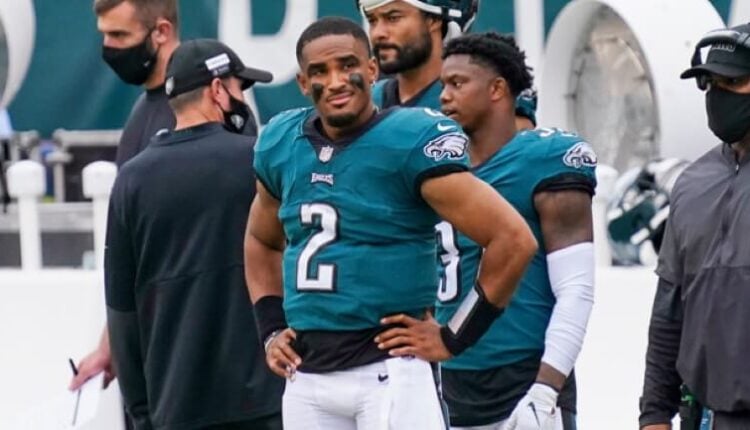 Injuries were the name of the game for quarterbacks in Week 2.  Tua Tagovailoa, Andy Dalton, Tyrod Taylor, and Carson Wentz all left their games and were unable to return; Taylor was subsequently placed on the IR and will miss at least four games.  It will be worth monitoring the status of everyone else during the week, as there could be significant fantasy implications to the Week 3 Quarterback Rankings.

Outside of injuries, Week 2 had some noteworthy performances.  Daniel Jones finished the week as the QB4.  Through two weeks, Jones has 122 rushing yards, third-best behind Lamar Jackson and Jalen Hurts; he also has two rushing touchdowns.  Jones has a favorable matchup this week against the Falcons and is a top streaming option.

Jalen Hurts threw for 190 yards and no touchdowns in Week 2.  But he was still able to finish as a top-10 option by rushing for 82 yards and a touchdown.  Hurts should continue to be a top-10 quarterback this week against the Cowboys.

Dak Prescott surprisingly finished as the QB26 in Week 2. He threw for 237 yards, with no touchdowns and one interception.  He also failed to rush for any yards.  Prescott should be able to rebound in the Cowboys’ home opener against the Eagles this week.

Teddy Bridgewater has looked good through the first two weeks of the season, albeit against the Giants and the Jaguars.  He should continue to roll in Week 3 against the Jets and is a strong streaming option.

Derek Carr has been lights-out so far this season leading the Raiders to a 2-0 start, with wins coming against Baltimore and Pittsburgh, to boot!  He’s been the QB8 through two weeks and his 817 passing yards lead the league.  He’s a solid streamer against Miami this week.

Sam Darnold has a favorable matchup against the Texans this Thursday.  We’ll likely see a lot of Christian McCaffrey in this one, but Darnold should be a serviceable quarterback.  He’s been a top-15 quarterback through two weeks.

Andy Dalton is considered week-to-week with a knee injury.  Head coach Matt Nagy said Dalton will play if he’s healthy.  If Justin Fields starts this week, he’s worth starting in two-QB leagues, with a plus matchup against the Browns.

If you liked Lauren’s Week 3 Quarterback Rankings, be sure to check out the rest of our Week 3 Rankings and Analysis!