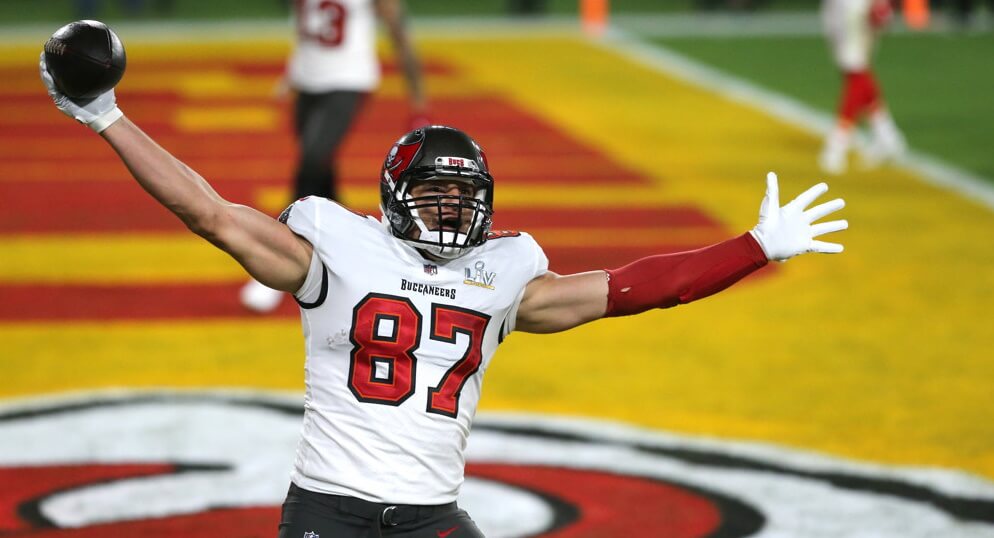 The 2021 NFL season started off with a bang as the Tampa Bay Buccaneers hosted the Dallas Cowboys, and boy oh boy, it did not disappoint!  The game was a high-scoring affair with lots of fantasy goodness — including at the tight end position.  Rob Gronkowski was in vintage form.  He caught eight passes for 90 yards and two touchdowns and finished as the TE1 in Week 1. Gronkowski is a top-10 tight end in my Week 2 Tight End Rankings.

Juwan Johnson was the surprise of the week, finishing as the TE4 with three receptions for two touchdowns.  Fellow tight end Adam Trautman had more targets (6) than Johnson (3), but Johnson played on more passing downs (83.3%) than Trautman (37.3%).  Their usage is worth keeping an eye on moving forward, especially with gunslinger Jameis Winston under center.

Kyle Pitts had an underwhelming stat line (31 yards, zero touchdowns), but saw eight targets — tying Calvin Ridley for the most on the team.  Pitts will play an integral role for the Falcons each week.  Trust the volume and the skills.

The Washington Football Team has a short week this week.  Logan Thomas could see an uptick in volume, especially with Taylor Heinicke looking for a safety blanket.

Continue to start Tyler Higbee with confidence.  He played on all offensive snaps in Week 1 and has significant upside playing for the high-octane Rams.

Jared Cook has a plus matchup this week against the Cowboys.  He had eight targets in Week 1 and should continue to get looks.

I’m high on Cole Kmet this week.  He played in 73.9% of the snaps in Week 1 and the Bears want him involved in the passing game.  He has a nice matchup this week against the Bengals.

James O’Shaughnessy had eight targets and caught six passes for 48 yards in Week 1.  Trevor Lawrence may be looking for some quick passes against a dangerous Broncos secondary this week, and O’Shaughnessy could be his safety valve.

I thought Mike Gesicki could be a sneaky play last week with Will Fuller out.  Turns out I was wrong.  Gesicki was out-snapped by Durham Smythe (38 to 21) and finished the day with zero receptions on two targets.  Woof.  The Dolphins play the Bills in Week 2.  No, thank you.

Dalton Schultz had more snaps and targets than Blake Jarwin in Week 1.  Additionally, OT La’el Collins was suspended five weeks for violating the NFL’s substance-abuse policy.  Both tight ends could split time and could now be used more in the blocking game, limiting their upside.

Cleveland used all three of their tight ends in Week 1, with David Njoku seeing the most targets (5).  Hooper and Njoku just about split snaps as well, with Hooper playing 38 snaps and Njoku playing 35.  Until there’s a clearer role for Hooper moving forward, he’ll remain a low-tier tight end.

If you liked Lauren’s Week 2 Tight End Rankings, be sure to check out the rest of our Week 2 Rankings and Analysis!