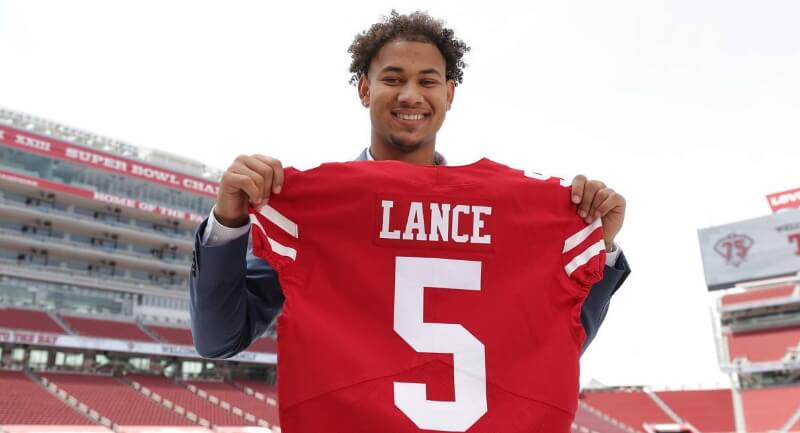 The finality of the fantasy football season is always bittersweet. Bitter because months of hard work and fun are coming to an end. Sweet because if you’re still reading this waiver wire column, you have a shot at your league’s title. Depending on your league size and rules, the waiver wire this week will have a few players worth adding to help you win it all. The list may be short, but that’s only because you only have one game left to get through. Even if they don’t make it into your starting lineup, these players are worth getting on your roster especially with the threat of sudden Covid-19 news impacting your usual studs. It’s time to get rid of players you absolutely do not need for Week 17 and make sure your bench is ready if called upon.

Below, we’ll look at players at each position to target, who are on 50% or less of most fantasy football rosters, that could be considered on the Week 17 waiver wire.

Be sure to follow me on Twitter @Colin_McT for up-to-the-minute advice, news updates, and to connect with any questions you may have! Good luck and go win it all.

Miles Sanders is out for Week 17 at least with a broken hand. Though it’s been a frustrating year of injuries for him, fantasy football managers have had multiple opportunities to see how the Eagles run their backfield in his absence. With that said, Boston Scott is your next man up off of the waiver wire.

In three games without Sanders this season, from Weeks 8 through 10, Scott averaged 11 carries per game. More recently, once Sanders exited with his hand injury in Week 16, Scott went on to lead all Eagles running backs in carries with 12. More importantly, he was the back with the ball in his hands for a three-yard touchdown run that claimed the lead for the Eagles early in the second half.

Rookie Kenneth Gainwell is not on the field enough to have a fantasy impact in Week 17. However, if Jordan Howard is unable to play due to a Week 16 knee injury, Gainwell could see more of a workload. Regardless, Scott is going to lead all of these running backs in touches this Sunday. Philadelphia will play the Washington Football Team that Miles Sanders rushed for 131 yards against just two weeks ago. Jordan Howard and Jalen Hurts totaled an additional 107 rushing yards in that game. Scoop up Boston Scott on the Week 17 waiver wire given his opportunity at similar success.

In fantasy football, volume is king. I’m sure you’ve heard that before. It’s especially important to keep in mind when considering a player like Burkhead on the waiver wire. He’s not the flashiest running back and certainly not on the most successful team. However, last week, he carried the ball 22 times for 149 rushing yards and scored twice. He may not have had your curiosity, but now he should have your attention.

Admittedly, Burkhead is coming off of his best game all season. Prior to his Week 16 outburst, he hadn’t topped 41 rushing yards in any other game this season. However, he is averaging 14.5 carries in the last six games. If you want to chase the volume, Burkhead is an obvious waiver wire add as the top back in Houston. It’s a bit of a play and pray decision given a tougher than most road matchup against the San Francisco 49ers. While it’s not an ideal matchup for fantasy finals week, Burkhead will be busy.

Ogunbowale is the next man up in the Jags’ backfield following James Robinson’s season-ending Achilles injury. Robinson exited Jacksonville’s Week 16 contest against the New York Jets in the first quarter. In his absence, Ogunbowale carried the ball 17 times for 57 yards and a touchdown. He added two catches for 15 yards on four targets.

As the Jaguars move forward now without Robinson, Ogunbowale should see a bell-cow role in Week 17, as well. It’s not quite the quality matchup the Jets are. However, the New England Patriots are allowing the ninth-most rushing yards and fourth-most receiving yards to running backs this season. Ogunbowale should be picked up off of the waiver wire with flex potential at least in Week 17.

Other Running Backs to Consider

Derrick Gore is going to have a nice-sized, short-term role in the Kansas City Chiefs offense while Clyde Edwards-Helaire nurses a shoulder injury. For fantasy football purposes, he is a deeper league consideration to plug into starting lineups. He has 89 or more all-purpose yards in two of the last three games. If something were to happen to Darrell Williams this week, Gore is a must-start in Week 17.

Duke Johnson, Jr. enters Week 17 with 35 total carries under his belt the last two weeks. Unfortunately, he and the Miami Dolphins face a Tennessee Titans defense that is bottom three in points allowed to running backs. This is a volume-based play on an offense where Jaylen Waddle is the only player really worth trusting.

Ke’Shawn Vaughn is now the number two back in Tampa Bay with Leonard Fournette on Injured Reserve. Vaughn is coming off of a game where he saw a season-high number of carries (7) and career-high 70 rushing yards while scoring his first NFL rushing touchdown. With the best possible matchup for running backs, the New York Jets, in Week 17, Vaughn should get some run even with Ronald Jones carrying most of the load. He’s a risky start but could pay off big time with the right opportunity and a Buccaneers lead.

Cam Akers is supposedly going to make a miraculous return from a July Achilles tear injury for the Rams this week. With Darrell Henderson heading to Injured Reserve, Akers could be the backup to Sony Michel. I do not trust Akers’ situation enough to plug him into any championship starting lineup. He may be worth stashing on the bench just in case.

Osborn is the top add on this week’s waiver wire with Adam Theilen back to dealing with an ankle injury. He is the clear fill-in for Theilen having played no less than 79% of snaps the last four weeks with Theilen exiting early or not playing at all. In two games without Theilen, Osborn played 86% and 88% of Vikings snaps.

In that same span, Osborn has scored three touchdowns in three separate games. He’s not only capable of cashing in as a deep threat, but he’s seeing a solid volume of 6.5 targets per game the last four weeks, as well. Osborn is an obvious waiver wire add, but is also a must-start in the fantasy football finals.

Mike Williams is already ruled out for Week 17. While the Denver Broncos prevent a tough matchup for wide receivers, I trust Justin Herbert’s ability to overcome even the toughest pass defenses. I expect rookie stud cornerback, Patrick Surtain, to focus on Keenan Allen in this one. Joshua Palmer should see his usual, recent volume on a potent offense. I have him as a WR3 with upside making him a must-add on the Week 17 waiver wire.

As the Bills continue their playoff push, Isaiah McKenzie presents must-add and potentially must-start production off of the waiver wire this week. Last week, without Gabriel Davis and Cole Beasley in the lineup, McKenzie caught 11 of 12 targets for 125 yards and a touchdown. Both Davis and Beasley are not only on the Covid-19/Reserve List, but unvaccinated. Therefore, they are in jeopardy of missing Week 17.

With that said, McKenzie should be scooped up just in case. The Bills get the Atlanta Falcons for fantasy football championship week who allow the fifth-most fantasy points to wide receivers. McKenzie is an absolute weapon whose speed creates potential for points especially after the catch. With fantasy’s QB1, Josh Allen, throwing the ball his way, McKenzie is a must-start if one or both Beasley and Davis sit on Sunday.

Other Wide Receivers to Consider

Allen Lazard is playing the second-most snaps at wide receiver on the Packers behind Davante Adams since the team’s Week 13 bye. In the last three weeks, he’s caught 10 passes for 143 yards and two touchdowns. Aaron Rodgers is the frontrunner for MVP and has the Green Bay offense averaging 33.3 points per game in their last three. Lazard gets the Minnesota Vikings defense in Week 17 who allow the most fantasy points to wide receivers. I’d add him from the waiver wire if nothing else but to keep my opponent from grabbing him.

Rashod Bateman is a talented rookie receiver, but his current situation in Baltimore is shaky. In the last three weeks, Lamar Jackson, Tyler Huntley, and Josh Johnson have all spent time under center for the Ravens. Bateman has scored 17.3, 1.5, and 12.6 PPR points in those contests. While he’s been hot or cold, he gets the Los Angeles Rams in Week 17 who are allowing the third-most receptions and fifth-most receiving yards to wide receivers this season.

In the last five weeks, Kmet is averaging 7.4 targets per game with no less than five in any of them. That’s with Justin Fields, Andy Dalton, and Nick Foles all throwing passes his way. Still, Cole Kmet has hauled in at least three catches in said games, presenting a higher floor than most at tight end. Pick him up off of the waiver wire just in case you need a last-minute option to plug into your lineup.

Speaking of a solid floor at tight end, look no further than Gerald Everett. He has either 60 receiving yards or a touchdown in each of the Seahawks’ last three games. That’s good enough for a 10.0 floor in each. In fact, he enters Week 17 following up his best game of the season where he recorded a 4/68/1 receiving line.

With the fantasy football championship at stake, Everett has a choice matchup at home against the Detroit Lions. The Lions defense has allowed the eighth-most points per game this season to tight ends. Everett should be added as a streaming option for teams in the finals who need one.

Tua and the Dolphins are on a seven-game winning streak. So, you would think he is a top option in fantasy football. Not exactly as he’s only hit the 20-point mark once during this stretch. Luckily, in Week 17, he and the Dolphins head to Tennessee against a Titans defense allowing 17.8 points per game to opposing quarterbacks. More importantly, the Titans allow the second-least amount of fantasy points to running backs. I expect Tua to pass a ton in Week 17 which could lead to bigger than usual numbers for the second-year quarterback. He is a safer than most option off of the waiver wire.

It seems starting quarterback, Jimmy Garoppolo is unlikely to suit up in Week 17 with a broken thumb that has additional ligament damage. Trey Lance, whom many expected to have high fantasy upside this season, may finally get his chance to show what could’ve been. The draw with the rookie is his rushing ability. That, coupled with weapons like Deebo Samuel, George Kittle, and Brandon Aiyuk in the passing game, Lance could be a high upside option for deeper league championship teams. It would be a bold play to pick him up off of the waiver wire and count on him. However, you can’t ask for a better matchup than the Houston Texans who allow an average of 26.7 points per game this season.