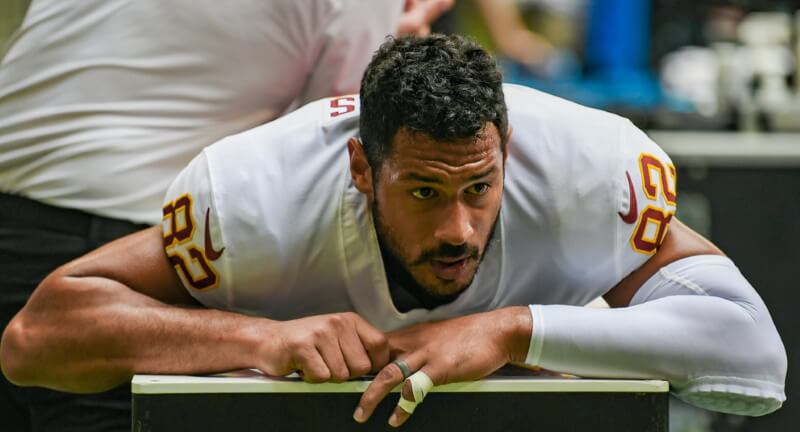 Zach Ertz made the most noise in Week 11, catching eight passes for 88 yards and two touchdowns.  While Ertz and Travis Kelce will be on byes this week, we may finally see the return of Logan Thomas.  If he’s a go, he’ll slot back in as a TE1.  Be sure to monitor his status during the week and plan accordingly.  Now, let’s get to those Week 12 tight end rankings and notes.  As a reminder, they’re based on half-PPR scoring.

Dalton Schultz rebounded in Week 11 and led the Cowboys in receiving yards, going 6-for-8 for 53 yards.  Schultz should continue to see volume this week, with Amari Cooper on COVID-IR.  If CeeDee Lamb remains in concussion protocol, expect Schultz to have an even better day.  He’s a TE1 this week in a favorable Thanksgiving Day matchup against the Raiders.

Rob Gronkowski returned last week and looked good, catching six of eight targets for 71 yards.  He gets a plus matchup this week against Indianapolis.  The Colts have given up the third-most targets and receiving yards to tight ends.  They also allowed the sixth-most fantasy points to the position.  Gronk is a top-10 TE this week.

Pat Freiermuth continues to get volume, seeing at least seven targets in four of the past five games.  He also leads the Steelers in red-zone targets (14), and scored four touchdowns in the past four games.  Eric Ebron will miss time with a knee injury, so consider Freiermuth locked in as a TE1 for the rest of the season.

Noah Fant is second on the Broncos in targets (59) and gets a plus matchup against the Chargers in Week 12.  The Chargers have been generous to tight ends this season, allowing the second-most fantasy points to the position.  They’ve also allowed a league-leading nine touchdowns to tight through 10 games.  Fant is a solid play this week.

Evan Engram doesn’t see a ton of targets (12 in the past three weeks), and the Giants’ offense is a mess.  However, Engram gets a juicy matchup this week against the Eagles.  Philadelphia has allowed the most targets, receptions, yards, touchdowns, and fantasy points (phew!) to tight ends this season.  Engram scored a touchdown in two of the past three games, and I like his chances to score this week.  He’s worth a stream in Week 12.