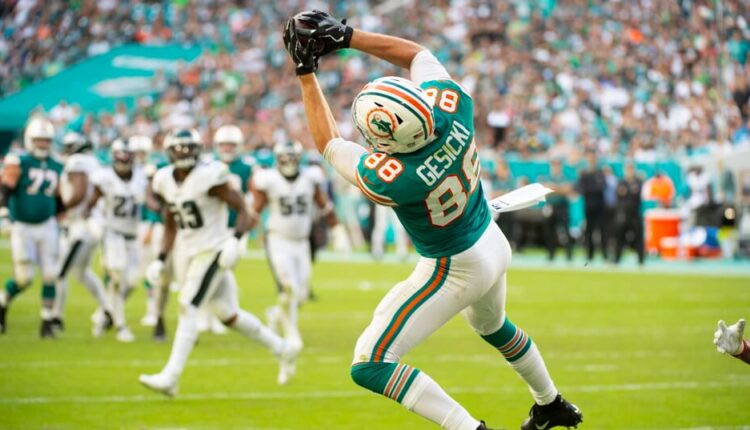 Hunter Henry and Tyler Conklin finished as the top tight ends in Week 10, with each scoring two touchdowns.  Both continue to push their way up my ranks, and are TE1 options this week.  On the flip side, Dalton Schultz heads down my ranks this week, as Michael Gallup’s return will likely continue to cut into his volume.  There’s lots to consider this week, so let’s get to those Week 11 tight end rankings and notes.  Keep in mind, my rankings are based on half-PPR scoring.

First and foremost, there are a couple of injuries worth tracking this week:

Mike Gesicki put up a rare dud in Week 10, failing to haul in any of his seven targets.  However, he’s second on the Dolphins in targets (69) and has a nice rebound opportunity this week against the Jets.

Hunter Henry typically doesn’t see more than four targets each week, but he continues to hit pay dirt.  He’s scored a touchdown in all but one game since Week 4 and is the TE3 on the season due to his scoring ability.  Henry gets a tasty matchup this week against the Falcons on Thursday night.

Pat Freiermuth continues to soak up targets; he has 29 in the past four games, trailing only Diontae Johnson.  Freiermuth gets a favorable matchup in Week 11 against the Chargers, who have allowed the fifth-most fantasy points to tight ends this season.

Dan Arnold leads the Jaguars in targets (24) over the past three weeks.  While he hasn’t scored a touchdown this season, he’s proving to be the most consistent pass-catcher on the team.  Arnold doesn’t have the easiest matchup against the 49ers, but he’s a solid floor play at an inconsistent position.

Adam Trautman has at least six targets in each of the past three games.  He’s yet to score a touchdown but has a shot this week against the Eagles, who have allowed the most touchdowns (8) to tight ends this season.