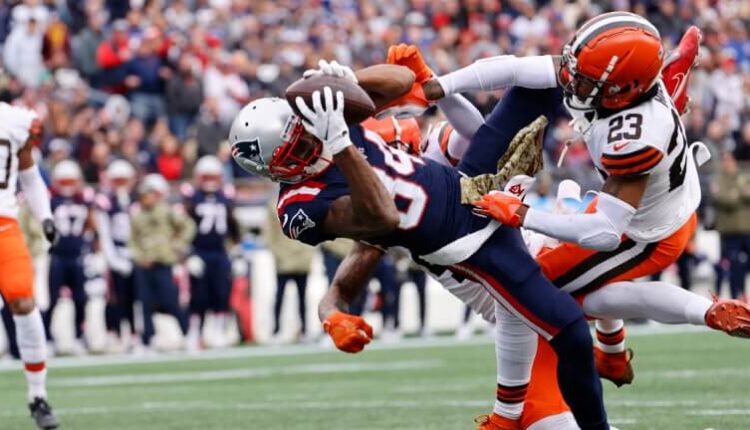 The waiver wire has come and gone. You’ve spent your FAAB dollars. It’s time to dig deep and look at the matchups to decide how to construct your starting lineups for NFL Week 11 of the fantasy football season. We’ve got you covered, friends. Let’s get into the top Week 11 sleepers and streamers!

The Patriots made some interesting signings in this past offseason. The ones that haven’t quite panned out as expected: Jonnu Smith and Nelson Agholor. The ones that have been team-defining: Judon, Hunter Henry, and Kendrick Bourne. Mac Jones has had a relatively pedestrian/game-managing role with the Patriots. But he’s accurate,  doesn’t turn the ball over, and he makes the big throws when they need them. It’s not completely out of the realm of possibility that he grows into a gunslinging QB with the confidence to make every throw (he is just a rookie after all). For now, we need to accept Mac Jones for what he is, and that works well for Kendrick Bourne. Halfway through the season, and Bourne has 33 catches on 43 targets and 530 yards with 3 TDs. Bourne is their best possession receiver, and if you need to stream a receiver, you’ll want to do it with one that has the upside of what Bourne gave us last week: 4/98/TD; 3/43. I like his chances of repeating it against a porous Falcons defense.

I know what you’re thinking, and just hear me out! This isn’t an article about who I think is getting ready to go off. I’m not crazy. This is for people that have had their fantasy teams devastated by COVID, injuries, or both. I can understand that desperation, and I’m here to help. Sammy Watkins has a floor that is negative (as we saw last week with his 1 catch and 1 fumble). His ceiling, however, can get you through a tough week. Before his injury, Watkins had 35 targets and 300 yards through his first 5 games. I’m aware that those targets came before the presence of Rashod Bateman, but Lamar has been throwing 40 times in close games. He also spreads around the wealth. He just missed Watkins for a TD against the Dolphins, and Bateman still had a great game. There is enough to go around. Will the game against Chicago be close? I don’t know. We’ve seen crazier things happen, and Chicago looked solid last week. Put Watkins on your radar. He’s surely available in your leagues.

I thought we would be singing Jeremy McNichols’ praises by now, but apparently, they don’t trust him to be a lead back. I don’t know why, but they’re the ones who run the practices. Adrain Peterson is in a three-man timeshare, but he’s the one the Titans employ in the red zone and at the goal line. Against the 31st ranked rushing defense in Houston, Peterson should be able to have a goal-line chance or two. I expect the old man (who could beat my ass very easily if he read that) to get in the end zone.