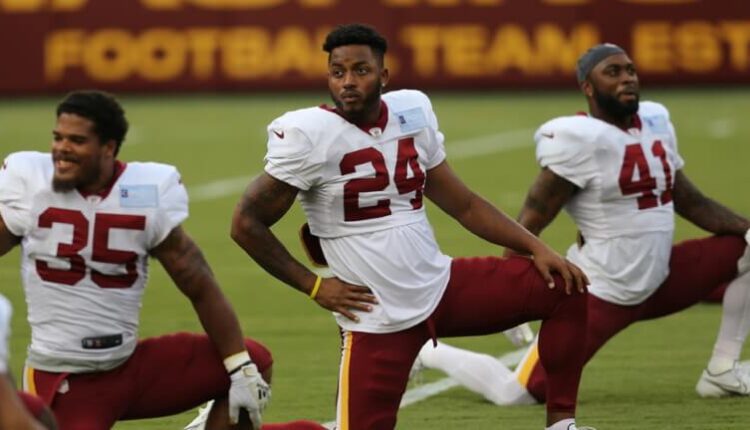 If your league has a trade deadline, it’s probably soon. Most of my league default trade deadlines are set for this Saturday, November 20, 2021. With that said, this is the last week in those leagues to sell high and buy low on the trade market. After that, it’s up to the waiver wire and free agency to keep rosters strong.

Below, I nominate a few trade candidates at running back, wide receiver, and tight end to sell high and buy low on. Let this continue to be a guide on which players to consider acquiring or moving any given week.

Antonio Gibson is coming off of his best fantasy performance of the season. Notably, he’s also coming off of a game where he had a career-high 24 rushing attempts. Next up, he and the Washington Football Team are heading to Carolina who are allowing the 12th-fewest rushing yards per game.

I don’t want the suggestion to sell high on Gibson to take away from his performance Sunday. He scored the game-winning touchdown (his second of the day) against the defending Super Bowl Champion Tampa Bay Buccaneers in a 2020 playoffs revenge game. However, I’m concerned this could be an outlier performance for the remainder of the season.

The Football Team rarely has or holds leads like they did Sunday against the Bucs. In fact, I had J.D. McKissic as my Week 10 bold prediction for a big performance anticipating that they’d be playing from behind. Gibson was able to see this volume and drain clock because of a good effort from their defense that caused multiple Tampa turnovers. It lent to an opportunity for Gibson to log the carries he did on his highest snap-count since Week 5.

Assuming you’ve found an answer at running back during Gibson’s midseason slump, try to sell high on him while you can for another position of need.

It may be difficult to sell high on any Raven following their abysmal Thursday Night Football performance in Week 10. Still, “Hollywood” Brown logged 13 targets and has acted as Lamar’s top target for the majority of this season. However, a big reason to sell high now is the inevitable rise from rookie receiver, Rashod Bateman. In fact, I have Bateman as one of my top Week 11 waiver wire targets, the last time he’s probably as available as he is.

Marquise Brown is averaging a ridiculous 13 targets over his last three games. However, he’s caught just barely half of those targets. He’s still managed a 116-yard game in overtime two weeks ago and has also found the end zone in that span. I just think, especially after 10 days rest, Bateman continues to see his fair share of targets and could, again, lead the team in receiving yards when they head to Chicago in Week 11.

Of all of the receivers on your roster, Marquise Brown is probably the most expendable. He wasn’t drafted as your WR1, but has outperformed where you likely drafted him. Moving forward, however, he could be a good sell high now to acquire a running back with the idea that the Ravens continue to focus on running the ball and see Bateman’s role expand.

It’s hard to even suggest a sell-high candidate at tight end given the state of the position. This seems like it’s always the case week after week, year after year. If it’s not Travis Kelce, there’s almost always a risk for less than ideal production from whoever’s in your lineup.  Dan Arnold is a player I’m actually really excited about. I love that the Jacksonville Jaguars went out and acquired him in a trade from the Carolina Panthers. It made sense, especially to help develop Trevor Lawrence.

For fantasy football purposes, if Dan Arnold is on your roster, he’s either playing in place of a tight end who has let you down prior to adding Arnold or he’s backing up someone you can’t justify benching for Arnold. Whatever the case may be, if Arnold is one of two tight ends on your roster, now may be the best time to sell high.

He’s averaging eight targets per game the last three weeks. With that volume, he’s scored at least 10.0 PPR points in that same span. If someone is desperate for that sort of production at tight end, Arnold is a great player to move if said manager has high-quality depth at running back or wide receiver that you could use. Consider Arnold more of a scenario-based sell high candidate.

I’m on record in a few places claiming Javonte Williams as a “league winner.” Up until this point, everyone will tell you that he’s spent all season splitting work in the Broncos backfield with Melvin Gordon. While that’s true, Javonte Williams is the more efficient back as of late.

Gordon is leading the two in fantasy points 127.3 to 99.0 solely because of lopsided touchdown production. Gordon’s found the end zone seven times this season while Williams has scored just twice. However, since the beginning of October, Williams is averaging 5.87 yards per carry to Gordon’s 4.34. On top of that, Williams logged his first 100-yard rushing game in Week 9, something Gordon hasn’t done since Week 1.

While Gordon is on a four-game scoring streak, with five total in that time, now is the best opportunity to buy low on Javonte Williams. If you can afford to eat his Week 11 bye, I have faith the rookie comes out on the other side with more of a workload. Furthermore, the Broncos’ rest of the season schedule is absolutely mouthwatering for running backs. Most notably, they face the Los Angeles Chargers, who are allowing the most rushing yards per game, coming out of their bye in Week 12, as well as in the fantasy football championship in Week 17.

Moore was averaging 22.4 fantasy points per game in the first four weeks of the season. Since then, he’s averaging just 9.48 points. It’s not for a lack of targets. Moore is far and away the lead target getter in Carolina with 95 on the season. The next closest player is Robby Anderson with 59.

To be blunt, Sam Darnold has been awful at quarterback. He’s steadily declined and P.J. Walker, who has since filled in, hasn’t been much better. Now, however, Cam Newton is set to start for the foreseeable future which should be a boost to all Panthers players. Even if Moore’s target share decreases, the quality of the offense and passes thrown his way should improve.

Cam Newton is set to make his first start as a Panther in 2021 against his former head coach, Ron Rivera, and the Washington Football Team. Their defense just lost defensive end, Chase Young, to a torn ACL. On top of that, they’re allowing the third-most passing yards per game. Prior to their surprising stance against the Tampa Bay Buccaneers offense in Week 10, they were allowing the first-most passing yards per game.

Now is the best time to buy low D.J. Moore who figures to be Cam Newton’s top target with a prime matchup in Week 11 to get back on track. The trade window to do so will likely slam shut on Sunday.

There’s no better time or player to buy low on at tight end than now with Mike Gesicki. Whoever has Gesicki on their roster is probably devastated following a goose egg performance in Week 10. It’s not out of the question that they’re looking for another option at the position for Week 11. So, swoop in and buy low on Gesicki if you need a tight end yourself.

As I’ve mentioned before, Gesicki didn’t record a single catch last Thursday night. However, he still saw seven targets in the Dolphins’ win. Furthermore, he’s second in team targets this season, and specifically the last two weeks, behind only Jaylen Waddle. It’s hard not to feel down about zero points for any player, but the usage is still there with Gesicki. He’s got matchups against the New York Jets porous defense, too, twice in the next four games.