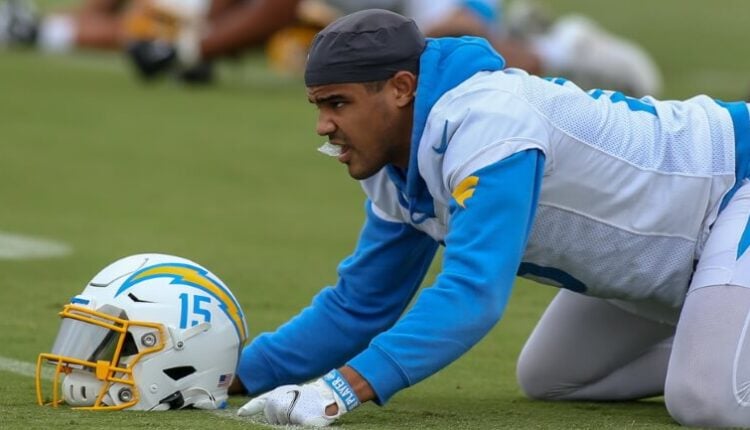 I get it. There is no such thing as a sleeper anymore. Every player is talked about at some point during the offseason and draft season. However, I still love using this word when talking about guys that no one is really showing excitement about. There is always a handful of guys that we take a shot on in the last two rounds of our drafts or sometimes aren’t even drafted at all. The goal of this piece is just to put these names in your head, so you’re not surprised when they do have an impact. Here are my 2021 fantasy football sleepers for upcoming drafts and the season.

So, do I really want to start this with a 2020 undrafted backup running back? Yes, I do. Hear me out. Miami will head into the season with what appears to be a running back room of a 7thround draft pick as their starter, Malcolm Brown as an offseason addition, and undrafted Salvon Ahmed. Not the most exciting group in the world. As one of my favorite last-round picks, it was only right to start with the former Washington running back as the first of my 2021 sleepers.

Going in as the starter, Myles Gaskin has a current ADP of #47 overall according to FantasyPros ADP. The opportunity for Gaskin should be there to start the season, but him having the starting role locked in for the full season is all but a guarantee. Don’t hear what I’m not saying, I do think Gaskin is a better overall player. But if the opportunity is driving the ADP, we need to look at anyone who may emerge in this backfield. Pair that with the fact that I actually liked what I saw from Ahmed in 2020. He handled a workhorse role for the Dolphins while Gaskin was out due to injury in Weeks 10, 11, and 15. Through those weeks he averaged 83 rushing yards per game and scored two touchdowns. Compared to just three scores for Gaskin in seven starts.

Ahmed showed great burst and good low pad running, he was tough to bring down on first contact and was used around the goal line. Toting the rock 23 times in week 15, which is more carries than Gaskin handled in any single game in 2020, he went for 122 yards and a score. Their trust in him handling a full workload alone makes him at the minimum a premium handcuff for Gaskin. That alone makes his ADP of virtually undrafted, too low.

If you haven't had a chance to watch Miami over the past two weeks, here's a look at Salvon Ahmed.

He is a lot of fun (unless you're a Myles Gaskin owner) and his Week 10 usage was great:

No, I did not forget about Malcolm Brown. We all know Brown wasn’t brought in to handle a large number of touches. This backfield just needed some veteran leadership and a good pass protector. Don’t get me wrong, Ahmed isn’t a world-beater of talent. But he has a pretty believable path to enough work to put him in fantasy consideration at the end of drafts. Gaskin has failed to show he can hold up in a bell-cow role, both physically and by efficiency metrics. I wouldn’t be surprised if early-season struggles lead to more opportunities for Ahmed. But like I said if nothing else take the shot on a solid handcuff for an unproven starter.

For the next player in my 2021 fantasy football sleepers, I just want to start by saying, it’s totally okay if you don’t even know who Jalen Guyton is. I’m here to tell you why I think you should. Coming out of North Texas in 2019, Guyton went undrafted and was picked up by the Cowboys before being cut and making his way to the Chargers. With this being a super deep option, there are a few things you will have to believe in order to buy into Guyton as a sneaky flier.

You will have to ask yourself if you believe the Chargers will have a good enough offense in 2021 to sustain three wide receiver options. With a new-look offense and an ascending young quarterback, I expect this team to be in the top half of the league in all major offensive categories. But will the opportunity be there? Guyton averaged 78% of snaps in 16 games in 2020. A number even slightly less than that will lead to a solid number of opportunities within this passing game. The Chargers will need multiple deep passing game options within their new Joe Lombardi offense.

Justin Herbert with the #BigTimeThrow putting it right on Jalen Guyton's hands who takes it 70 yards for the touchdown pic.twitter.com/rtzTkWD4Aw

The expectation is that the true ability of Mike Williams will be on display in 2021. While the fantasy football world (including me) is jumping in on Mike Williams at ADP as a great value. We expect that this role will be important within the Chargers’ offense. Guyton should be the next man to step into this role on any snaps or overall time missed by Williams, as well as in three-wide sets.

Solely based on the minimal draft capital you are giving up to roster Guyton, it is worth seeing what this 3rd wide receiver role will produce within this Justin Herbert led Charger’s offense. Should Guyton see more of the target share by way of injury or an uptick in passing volume, combined with his 18.3 yards per reception, we could see the recipe for fantasy success come together.

I’m having a hard time understanding this ADP. We are taking handcuffs and backup running backs for teams whose starter is 100% healthy, but we aren’t taking one whose starter is coming off a major knee injury? Sure, we’ve seen Booker before, and he didn’t fully impress us. We said the same thing about Wayne Gallman before he was solidly successful in what I believe to be a much worse offense in 2020. This ADP alone for Booker makes him a no-doubter in my 2021 sleepers list.

You almost never find what is considered a “sleeper” who can potentially start the season with above 50% snap share with your last pick. Saquon Barkley will almost surely be eased in to begin the season. While no one knows how long that will last, it is at least going to provide opportunity for Booker out of the gate. Remember, the Giants did sign Booker rather quickly this offseason, more than likely with a plan in mind for Barkley to protect his health long-term.

If nothing else, he has proven pass-catching ability at the position. His overall grade at Pro Football Focus was right there alongside guys like Miles Sanders and JK Dobbins, who we normally view as much better players. Obviously, they are better players. However, even advanced metrics show that the Giants can feel comfortable easing Barkley in as much as possible. Booker averaged a solid 2.0 yards after contact, albeit a smaller sample size, this is the same average as players like Josh Jacobs. Yards after contact is an important stat when referring to the Giants offense. I think we all remember Saquon’s minimal time on the field, running into brick walls every carry.

Look, Devontae Booker will never play over Saquon if he’s right, but we draft handcuffs for a reason. That reason already exists in this backfield. We’ve seen this through two seasons with Barkley nursing an ankle injury most of 2019 as well. Opportunity will be there at the beginning of the season for the veteran running back. As I have said with all my 2021 sleepers, you’re giving up nothing to acquire these guys. At the very least, protect your investment in your stud with his free handcuff.

Reagor struggled in his rookie season in 2020, but who didn’t for Philly. Personally, I choose to give all the young Eagles another chance with a new coaching staff and full offseason. Check out the Eagles depth chart when you get a minute. They almost have no choice but for Reagor to produce in year two next to DeVonta Smith. The talent is there for the 21st overall pick in 2020. A clear-cut No. 2 wide receiver for a team that most expect to be in a pass-heavy game script. Sign me up this late in drafts.

A name I haven’t seen mentioned pretty much at all is Tyrell Williams. He could certainly be the spokesman for 2021 sleepers. I know, it is hard to invest in players on what we expect to be awful teams. Thankfully, you must invest absolutely nothing for most of these guys, especially Williams. Talk about the Eagles’ depth chart at the WR position, they look like a pro bowl roster compared to the Lions. After missing all of 2020, people have forgotten that Tyrell Williams was a thing in 2019. He caught a touchdown in each of his first five games that season. Nothing is telling me that he won’t be occupying their #1 wide receiver role. I can promise you one thing on this one, they will be passing a lot.

Are you buying into these fantasy football sleepers? For more Rankings and Analysis please check out our full 2021 Fantasy Football Draft Kit.

Whose Veto? What Collusion?