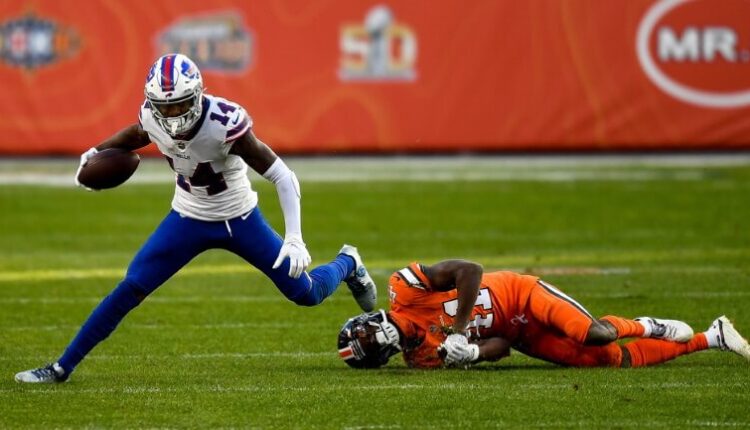 Turns out Jonathan Taylor the receiver is also really good.

My Rest Of Season Fantasy Football Rankings are all about the moment. Christian McCaffrey (1st overall) has been put at the top of my rankings because he is healthy and producing. Bills WR Stefon Diggs (11th overall) had his best game of the year against the Jets with 162 yards receiving. Tight ends are a nightmare this year so George Kittle (23rd overall) is getting a hefty bump because he’s producing and he’s healthy. Chiefs legend Patrick Mahomes (37th overall) had 5 TD passes in Las Vegas proving that he still knows how to dominate this game.

DeVonta Smith (55th overall) is getting into a groove with Jalen Hurts and has scored a TD in two straight outings. A.J. Dillon (70th overall) had 128 yards from the line of scrimmage and is clearly the main man in the Packers backfield for now with Aaron Jones suffering a knee sprain. Jamal Agnew (97th overall) cracks the top 100 thanks to his versatile ability to run and catch the ball. Robby Anderson (168th overall) has a chance to climb back up the rankings with Cam Newton (235th overall) arriving to throw him TDs.

Darrell Henderson Jr. (36th overall) falls back a tad this week mainly because the Rams have struggled the last two weeks. The Dolphins had a gutsy win over the Ravens last Thursday, but Mike Gesicki (116th overall) was unable to provide any offensive production towards the cause. Khalil Herbert (167th overall) is fading away as a useful fantasy option as the Ravens come into town this week and his future status will be determined by his workload this Sunday.

Laviska Shenault Jr. (176th overall) is on the field plenty during Jaguar games, but he isn’t doing much with those snaps. The brief run of Ricky Seals-Jones (230th overall) is likely done since he hurt his hip Sunday and Logan Thomas is returning soon from the IR. It’s a bummer that Robert Woods (402nd overall) tore his ACL practicing last week. Replacing his value on the Rams will not be easy.

These rankings will be updated for your viewing pleasure every Tuesday morning. Week 11 is panic time for your fantasy squad. If you’re sitting at 0-10, it’s bedtime until 2022. If you’re at 4-6, it isn’t over yet. You need to look at the specific match-ups for your players over the next four weeks. These rankings are focused on PPR scoring. Enjoy!

Michael’s Rest of Season Rankings will be updated every Tuesday.