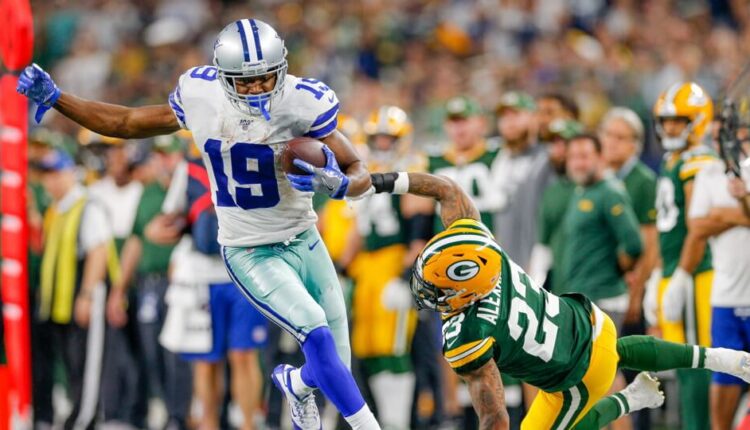 Our fantasy experts are back switching up from running backs to our PPR Wide Receiver Rankings for the upcoming 2021 season!  Some of the biggest changes from standard scoring to PPR was Mike Evans taking a dip in the rankings while Stefon Diggs and Keenan Allen climb up with there reception totals! Is Julio Jones still a WR1? Find out below from our analysts who to avoid, who will breakout and whether or not you should draft RB or WR’s early…

Below are the analysts that will be breaking down our consensus PPR Wide Receiver Rankings over the next few months. We have three analysts from you to draw from. We’ve included their initials so you know who is who in the rankings table, and also their Twitter handles so you can give them a follow and let them know what you think of their PPR wide receiver rankings.

CM – In most fantasy football leagues, your roster construction includes at least two to three wide receivers with the ability to start more depending on flex position designations.  While having a larger role in the passing game is a plus for running backs and tight ends in PPR formatting, it is the core value of the wide receiver position.  When I’m drafting my wide receivers, I mainly focus on target share.  The more of a target share the wide receiver has in their offense, the more opportunities to catch the ball and rack up fantasy points.  My goal is to walk away with at least one of my top-12 ranked receivers.  Then, I look at players who are usually heavily involved in moving their teams down the field through the air.  My best advice is to avoid specifically drafting big play, home run hitter-type receivers.  You need more consistency at this position to string wins together week to week.

MQ – The wide receiver position in PPR can be deep but also unpredictable. If you are drafting in the top half of your draft, go with a running back with the first-round pick. If you are drafting toward the end of the draft, I would easily take Tyreek Hill or Stefon Diggs over Nick Chubb. Those would be the only two receivers I would take in the first round. My draft strategy has always been if I got wide receiver first, I am going running back next or vice versa. So, when you get to the fifth round, you should have your core wide receiver and running back slots filled. However, some running backs have been falling in this year’s draft, such as Joe Mixon, Josh Jacobs, David Montgomery, and Antonio Gibson. So, if you have a late-round pick, I have seen some drafters end up with Hill and DeAndre Hopkins in the first two rounds, along with Jacobs and Najee Harris. Not a bad first four rounds. One last tip is if you are nervous about taking the risk of not taking running backs with your first few picks, then that is ok. You can still end up with top receivers late in the draft such, as Amari Cooper in the fourth or Adam Thielen in the fifth, or even Courtland Sutton in the eighth. Lots of options down the road.

MO – 10 out of the top-13 fantasy point finishers last season were from the WR/TE position so I agree with Michael above, we have to be smart and not be taking running back’s over the Hill’s and Adam’s of the world. I love starting with a bell-cow back when choosing from the top-6 and then going back-to-back WR picks.  This gives you a solid edge at receiver in PPR and there’s plenty of backs to pair with your bell-cow between the likes of Josh Jacobs, Chris Carson or Mike Davis if the RB’s start to fall. For my receivers, I like to build a group that gives you variety and versatility. If you can snag a D.K. Metcalf or n the second round, pair him with someone who has more reception upside giving you a dynamic duo.  I’ve mentioned before I don’t want two steaks. That’s way too filling. I want that fine wine to pair with a steak like 12 touchdowns from Metcalf and 90 receptions from Terry McLaurin. In the middle-late rounds take a look at guys that offer some high-upside and boom potential to put your duo or trio over the top. Michael Pittman could very well be the no.1 WR in Indianapolis and has an ADP of 128! That’s a nice flex right there!

Deebo Samuel was a key piece to the 49ers’ 2019 offense that led them to the Super Bowl. Yet, judging by his current WR39 ADP, it seems many people have forgotten about him. Deebo had a rough 2020 spending half of the season either on the injured reserve or the Covid-19 list. However, in 2019, he had a phenomenal rookie campaign recording over 800 reception yards, adding another 159 on the ground, on just 14 carries. Deebo is an exceptional playmaker leading the league in yards after the catch, with 9.8 per since 2019, logging 484 YAC total his rookie season.  He can be had at a bargain in drafts and I expect him to set new career highs in receptions, yards, touchdowns, and continue to get involved in the run game. Circle his name a few times and draft him ahead of a big breakout season.

Amari Cooper has only had one year where he went under 1,000 yards on the season. Last year he went for 1,114 yards on 92 receptions, and that was with Dak Prescott missing a majority of the season. The reason I have Cooper as a breakout is because he has been going in the fourth, and sometimes early fifth round in mocks. A lot of people are in love with Ceedee Lamb, but in terms of PPR Cooper, will be at the top of the depth chart with receptions. With Prescott back, the Cowboys’ offense will be back to a high-powered fantasy juggernaut. Lamb may snag some more touchdowns from Cooper, but Cooper will be the one getting them down the field with multiple catches. I see the duo as how Justin Jefferson and Thielen were last season for the Vikings. Cooper will be more of the run after catch receiver like Jefferson, and Lamb is more of a red-zone threat like Thielen. If Cooper falls to the late fourth or early fifth, consider that a wide receiver one steal for your team.

What receiver is next to make that big leap into the top-20!? I’m going with Brandon Aiyuk. Aiyuk dazzled at times throughout his rookie season and showed he has all the tools to be a major breakout candidate in 2021-22. Aiyuk finished in the top-44 amongst WR’s with 748 receiving yards with five touchdowns while adding 77 yards rushing and two scores… in just 12 games. That put Aiyuk on pace for a 1,100-yard season in a full-16 game slate. Aiyuk actually led the NFL in targets over a 5-game stretch averaging 12.4. Now even though George Kittle only played in one of those games it’s still pretty impressive for the rookie. Not to mention he posted games of 91 yards and 115 with Kittle beside him from weeks 7-8 proving that wasn’t a problem. What makes this real juicy is the potential of Trey Lance entering the lineup and its Bay Area bombs away for Aiyuk and Lance. Aiyuk did his damage with not only Garoppolo but a big chunk with Nick Mullins and also C.J. Beathard. Oh, baby. The more we see of Lance the more Aiyuk might climb into the teens in the weekly ranks. It’s a Gold mine in San Fran alright! Reach on Aiyuk in drafts!

The three-time Pro Bowler just won the Super Bowl capping off his 7th straight 1,000+ yard season.  He had a career-high 13 touchdowns and played in every game in 2020.  Tom Brady is his quarterback.  So, what’s not to love?  For starters, Evans had his third-fewest reception total, receiving yards total, and yards per catch average of his career last year.  He had seven games with three or fewer receptions, four of which he recorded just one or two catches.  Six of his 13 touchdowns came in the first five games.  He basically acted as the goal line back scoring three 2-yard or fewer touchdowns in the first three games.  Once wide receiver, Antonio Brown, joined the team, he had just one less target than Evans in the 11 games they played together.  With Brown, receiver Chris Godwin, and other offensive playmakers returning to the Bucs this season, I am concerned about how high Evans’ ceiling can be, especially at his WR14 ADP.  I’ll be fading him for other wide receivers in that range this season.

Kenny Golladay had been a trending receiver the past two seasons before his injury season last year. Golladay has dropped in the rankings, but he is still getting drafted before reliable receivers like Brandon Aiyuk, Cooper Kupp, and Courtland Sutton, for example. Golladay did have a breakout year in 2019 with 11 touchdowns and 1,190 yards. But that was Matthew Stafford throwing to him. Now he signed with a frustrating offense led by Daniel Jones. Jones has shown sights of greatness but has been way too inconsistent to take seriously. Also, we don’t know what Saquon Barkley is going to look like coming off back-to-back injury seasons. If you take Golladay, just know it will be a boom or bust performance with him. The Giants are just not an offense I trust this season and would only take Golladay no earlier than the 10th round.

One guy who continues to creep inside the top-20 in ADP is third-year pro, Diontae Johnson, and I’m not buying in. Don’t get me wrong, Johnson is very talented, but JuJu Smith-Schuster was the better player in PPR last season and he’s falling to an ADP of 30. Meanwhile, Johnson is the only one moving up? Yes, Johnson saw a ton of targets, but a motivated Juju will make sure that title is up for grabs. Also, it’s year two for Chase Claypool who was the most impressive of the trio at times last season. Johnson averaged 7.7 receptions in three of the first five games to begin last season while Claypool averaged just two during that span. That will change. Not to mention, it’s very likely to be the Najee Harris show in Pittsburgh this year. So, what’s everyone expecting from Ben Roethlisberger’s dwindling arm? 100 receptions for Johnson? I think not… I’m closing that steel curtain with his rising ADP. Give me his teammates going 10-14 spots later all day!

Are you digging our PPR wide receiver rankings? Then, you’ll also want to check our Consensus running back rankings for 2021 Fantasy Football.