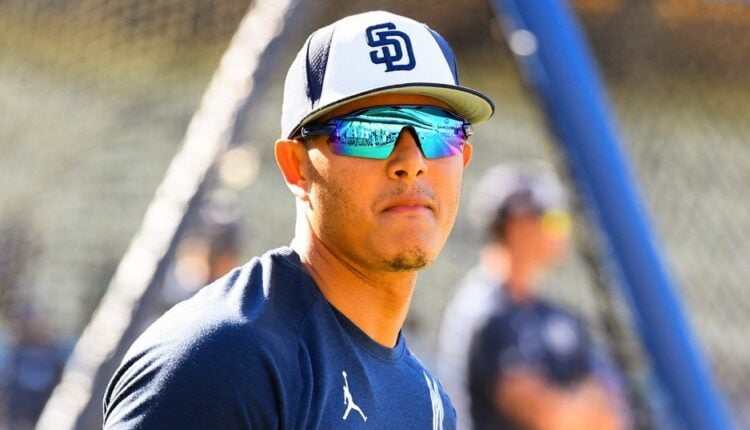 It is that time of year. The time where we long for warmer days and baseball. Reports are surfacing that pitchers and catchers will report on time, and the season will be a full 162 games. With that being said, it is time to prepare for Fantasy Baseball! Last week, we talked about some sleepers at third base. Today, we have to cover the dreaded topic of busts. Drafting a player early who underperforms can lose your leagues. If you can avoid certain landmines that end up being “busts,” you will be in much better shape for the season.

Let’s classify a bust as someone who will not return expected value based on ADP. I am not necessarily saying these players will be bad either. The third base busts we will discuss today are players who have a slim chance to return a profit at their current ADP.

2021 Third Base Busts For Fantasy Baseball

The third base position has few bust options and quite a few sleepers and values. Manny Machado stands out as one of the few obvious third base busts. If we were looking at solely 2020 production, you could probably justify this price tag. According to Razzball’s player rater, Machado came in as the eighth-best player in standard 5×5 leagues. In 2019, with a rather solid performance, Machado came in as the 124th player. The issue here is Machado’s volatility.

Check out Machado’s batting averages over the last four seasons: .259, .297, .256, .304. The inconsistency is what has me off Machado at his price. You cannot afford to take someone in the second round, giving you a batting average in the .250 range. As we have seen, the upside is obvious, but should we really expect it again next season? It is hard to say. 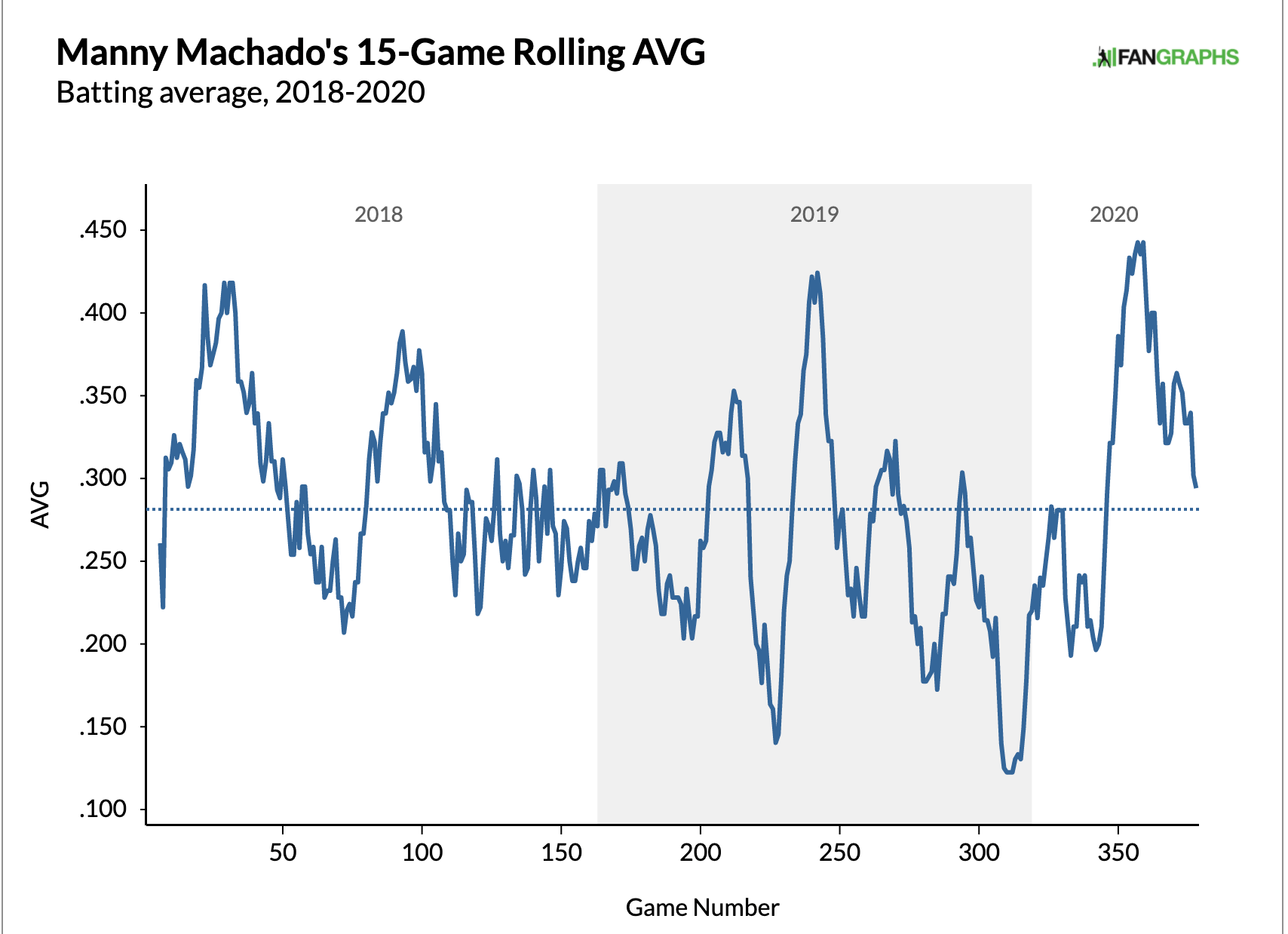 Machado’s speed is also a factor here. Getting stolen bases from players who contribute in all categories is important. Most of those players come in early rounds. Machado’s value was inflated last season by the fact he stole six bases in 60 games. Again, we are looking at a volatility issue. In 156 games in 2019, Machado stole just five bases. In 2016, he stole zero bases in 157 games. Machado will turn 29 next season and has had knee surgery in the past. The Padres like to steal bases, but why would Machado need to run next season? The team will have one of the better lineups in baseball, and Machado will not need to show off his wheels to create runs for the team. After all, Machado has not had a sprint speed above the 39th percentile since 2015.

There is plenty to like in Machado’s profile, though. First off, his durability is unmatched. Since 2015, no player has played more games than Machado’s 853. The highest number of possible games played during that span is 870, meaning Machado has only missed two percent of games.

The power is also steady. From 2015-to-2019, Machado averaged nearly 35 home runs per season. In 2020, he was on pace for 43 bombs. There are positives of taking Machado here, but question marks in speed and batting average. Bryce Harper feels like a much safer option at his price point, especially with some solid third basemen being available later. For all these reasons, Machado tops the third base busts list.

Jeff McNeil has been long known for having one of the best hit tools in the game. His contact rates are solid, but by no means in the elite level, but McNeil consistently hits for a high average. In 1024 career plate appearances, he has a career batting average of .319. Given what we know, it is a surprise to see projections down on his batting average. I know projection systems lean more conservative, but outside of ZIP (.297), other systems project him at .279, .284, .291, .286. All solid numbers, but I would expect McNeil to hit at least .300.

Beyond his ability to hit for average, there are question marks for McNeil. One being his power. In 2018, McNeil had a random power surge in double-A where he hit 14 home runs in 241 plate appearances. Then in 2019, he broke out for 23 home runs in 567 plate appearances. Additionally, that season he stole five bases and slashed .318/.384/.531. Even during that career season, he was only the 85th most valuable player, according to Razzball’s player rater.

I have legitimate fears that we never see that power from McNeil again. He only hit four in the shortened 2020 season. Those four came over a four-game stretch. In his other 48 games played, McNeil had a goose egg in the home run column. 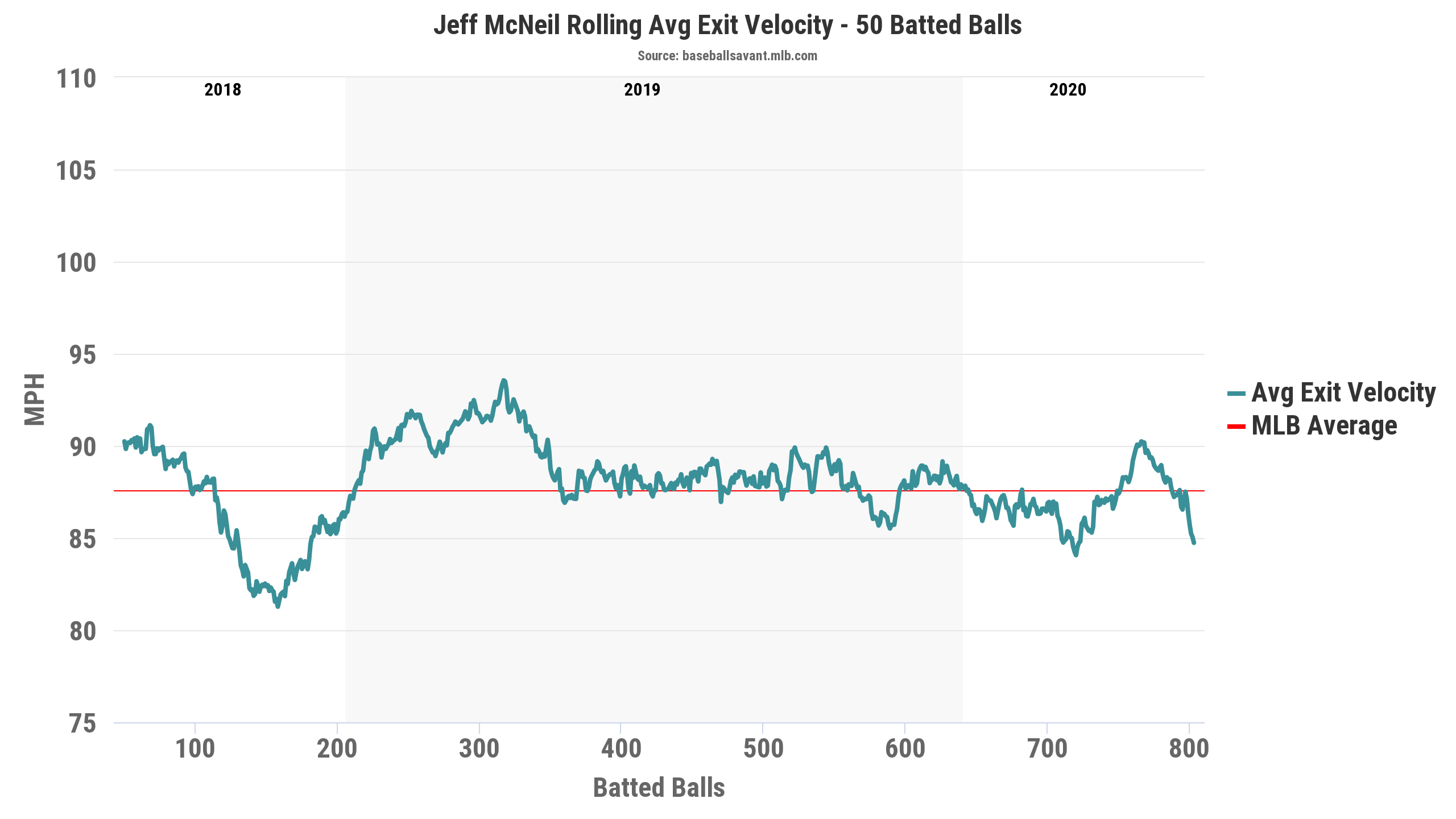 The reality is that even if McNeil hits over .300, he will need to hit 20 home runs to return value in 2021. I am leaning more on the side that he is a 12-15 home run hitter. In that case, I would prefer to wait on a hitter like David Fletcher, going well over 100 picks later who can give you a similar batting average and maybe slightly less power.

Through the first two months of draft season, Andres Gimenez went at an average pick of 193. Since he was traded to Cleveland as part of the Francisco Lindor trade, Gimenez is going at an average pick of 160, with a high of 153. I fear the draft price is only going to increase with the hype surrounding the trade.

The issue is not necessarily involving Gimenez’s ability on the field. The issue with the draft price is the fear of the Indians starting him in triple-A. Reports are that one of Cleveland’s top free-agent targets is Cesar Hernandez. Why is that significant?

Well, Cleveland insiders believed that Gimenez could slot in at shortstop and Rosario at second base. Rosario has always been a shortstop, but the club believed he could easily slot in at second. Cleveland believes that Gimenez can be their starting shortstop of the future despite playing both second and third base last season. BUT, Cleveland also believes that Gimenez was rushed to the majors after skipping triple-A. If the Indians use some of their freed up money to sign Hernandez, there is a high probability Gimenez could be sent to triple-A to get regular playing time. The team does tend to be more conservative with their top prospects and likes to save money. This move is right up their alley.

Take this for what it's worth, but knowing how the Indians operate, this (sadly) would not shock me with Andres Gimenez. They're cheap, but they will sign some guys yet

Outside of that issue, if Gimenez’s ADP does continue to get pushed up, there will be little room to profit. Over a full season, Gimenez is likely a 10-12 home run bat. He has solid speed and the upside to steal 20 or more bases. That is extremely valuable for Fantasy purposes. The hit tool does have some concerns, and Gimenez is likely a .260-.270 type hitter. His expected batting average of .246 last season does not give much hope he can improve on his .263 average.

As the price continues to rise, Gimenez will have less chance to return value. The chance of starting in the minors is also concerning. For these reasons, Gimenez is considered a third base bust.