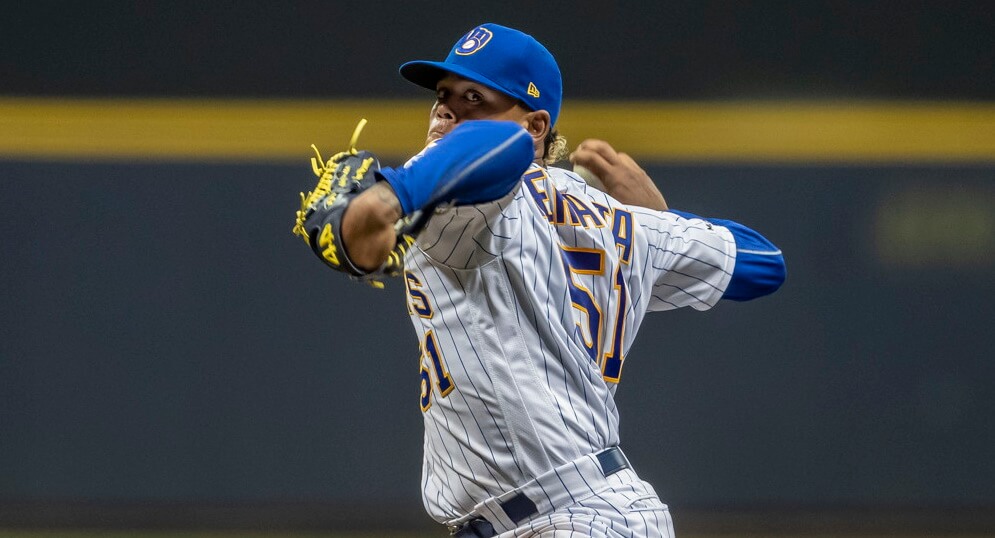 Call me crazy, but relief pitchers are among my favorite players to watch in baseball. Relievers tend to throw the hardest and feature some of the best strikeout numbers that only the best starting pitchers can see. Who doesn’t like watching someone like Josh Hader strike out the side? Or Liam Hendriks lock down a pivotal playoff game in the ninth inning? It’s exciting stuff! The thing is, we’re seeing fewer and fewer established full-time closers in the game today. There might only be ten settled jobs at the moment if that. So, that gives us an opportunity to get to know more of the reliever pool. Who stands out as potential relief pitcher sleepers that can get you quality volume or a chance at saves? I’ve got five relief pitchers for you to add to your draft queue.

Freddy Peralta and Corbin Burnes were going hand-in-hand as popular sleeper picks heading into 2020. While Burnes ultimately broke out in the rotation, Peralta had an impressive season as a valuable long reliever for the Brewers. Don’t let the mediocre 3.99 ERA fool you. It came with a 2.41 FIP and 3.23 xFIP with 47 strikeouts in 29.1 innings. And the numbers continue to paint a different picture when you remove Peralta’s only start on July 26, when he cruised through three innings before allowing three runs in the fourth against the Cubs. While Peralta pitched exclusively out of the bullpen following his first outing, the ensuing 26.1 innings came with a 3.08 ERA, 2.20 FIP, 2.83 xFIP, 1.08 WHIP, and 30.9% K-BB rate.

After a forgettable 2019 season, Peralta spent the offseason focused on developing a viable second pitch to go with his electric fastball. The result was a slider he threw at a 24.1% clip that induced a 54.3% whiff rate. A drastic improvement over the curveball he featured in 2019 that missed bats at a 30.6% rate. The video below highlights the differences between the two pitches. Let’s take a look.

The slider was a gamechanger for Peralta. While he might not ever become the starter we’ve been chasing since his MLB debut(5.2IP, 13K, 0ER), Peralta will still be a relief pitcher you’ll want to roster. Often pitching more than one inning, Peralta could have some better weeks than many traditional starters. At his ADP, he’d be a perfect relief pitcher to stash and put in your lineup when you don’t like a starters matchup. Let’s take German Marquez, for example. Marquez is someone you’ll take much higher but won’t want to start in Colorado. If you played Peralta over Marquez for his Coors weeks, you’d have gotten six wins, 58.2 innings, 67 strikeouts, and a 1.86 ERA! You don’t want to pass on this sleeper.

Chris Martin has been a valuable addition to the Braves since joining at the 2019 trade deadline. Since then, Martin has a 2.52 ERA, 0.81 WHIP, and 42 strikeouts in 35.2 innings for Atlanta. His late-career improvements in strikeout rate came with the addition of a splitter, a pitch that has induced a 17.5% swinging-strike rate for Martin since 2018.

With the departure of Mark Melancon, the closer job is open for the taking. Manager Brian Snitker has mentioned having three viable closer options on the roster. And it has been speculated that the role could be split between Martin and Will Smith. With Martin being the righty and Smith the lefty in the committee. While Smith might have a longer track record as a closer during his time in San Francisco, his first season in Atlanta did not go too well. After getting a late start due to COVID, Smith posted a 4.50 ERA and was hurt by the long-ball with a 33.3% HR/FB rate. At their ADPs, Martin presents the most value as a sleeper for the closing job and could pay off big time for those speculating on him for saves.

We’re diving deep into ADP with this next sleeper. Joely Rodriguez had not pitched in the majors since 2017. He posted a 6.33 ERA in 27 innings that season for the Phillies. After spending the following two seasons in Japan, the Rangers took a chance on Rodriguez, signing him before the 2020 season. The lefty brought back with him a new pitch, ditching the slider he previously paired with his sinker for a changeup. And boy, did it make a difference.

Rodriguez proved to be a promising investment by Texas after he posted a 2.13 ERA, 1.69 FIP, 1.03 WHIP, and 23.1% K-BB rate with 17 strikeouts in 12.2 innings. The changeup was a real difference-maker. He threw it 70 times in 2020 and did not allow a single hit off of it. Instead, the pitch induced a 75% ground ball rate and a 17.1% swinging-strike rate. Strikeouts and ground balls are a perfect recipe for success, especially in the crucial late innings. I would not be surprised to see Rodriguez saving games for the Rangers in 2021. Jose Leclerc has battled injury and ineffectiveness over the last few seasons. Demarcus Evans has all of four major league innings under his belt. And converted starter Jonathan Hernandez is expected to fill a long-relief role, throwing 2-3 innings at a time. You want a relief pitcher sleeper for some saves? This one is practically free.

Another lefty on this sleeper list, Gregory Soto, had a better year than the numbers indicate. In his first year as a reliever, Soto posted a 4.30 ERA, 3.76 FIP, 3.80 xFIP, and 29 strikeouts in 23 innings. He even recorded two saves. The problem was blowup outings inflating his ERA in a short season. Soto made 27 appearances for the Tigers in 2020. Of those appearances, 22 of them were scoreless. Nine of the 11 runs given up by Soto last season came in just three games. In fact, before his final outing, in which he allowed three of those runs, he had a 3.18 ERA, 3.37 FIP, and 3.33 xFIP. Soto had plenty going for him despite what the final surface stats say.

Going into the year, Soto had primarily pitched as a starter in the minors. Making the switch to the bullpen brought a velocity increase on his fastball, a sinker that averaged 97.3 MPH. That sinker, which he used 79.7% of the time, had a 56.3% groundball rate. Soto pairs that sinker with a slider that produced a whopping 30% swinging-strike rate, 36.5% chase rate, and allowed just one hit, a single. He’s stated his intent to throw that slider more next season as he’s worked on refining the pitch in the Dominican Winter League. The results could be excellent.

Standing in Soto’s way of the closer job is Bryan Garcia, who struck out only 12 batters in 21.2 innings. Garcia does not have any particular ties to new manager A.J. Hinch. Soto could very well take that next step and be a good closer, albeit on a bad team. Featuring that slider more and limiting walks will go a long way. At his price, this sleeper is well worth taking a chance on for saves late in drafts.

Ok, so Tyler Duffer was in my Late-Round Relievers to Target article. But you know what, he’s still going so late that I have to include him here again as a sleeper. Duffey not only repeated his 2019 success, he got better. In 24 innings, Duffey posted a 1.88 ERA, 2.57 FIP, 2.45 xFIP, 0.79 WHIP, and struck out 31 batters. By featuring more of his curveball, which induced a 73.3% groundball rate and 19.1% swinging-strike rate, he raised his overall groundball rate to 55.6% and swinging-strike rate to 16.3%. The skills are outstanding. But what about the role?

Taylor Rogers hasn’t exactly established himself as a bonafide closer. Rogers had to fight off Blake Parker and Sergio Romo for the job in 2019, as that situation started off as a committee. And to Rogers’ credit, he ran away with the job. But 2020 was a different story, as Rogers wasn’t quite as effective. He posted a 4.05 ERA and recorded nine saves. Right behind him was Sergio Romo, the right-handed complement to Rogers in the late innings. Romo registered five saves himself, as the situation reverted back to more of a closer-by-committee. Now, Romo is gone, and the right-handed Duffey should fill that role and be in the mix for saves. There’s 25+ save upside here with the chance Duffey takes over as the full-time closer at some point.

You buying into these relief pitcher sleepers? For more great rankings, strategy, and analysis check out the 2021 FantraxHQ Fantasy Baseball Draft Kit. We’ll be adding more content from now right up until Opening Day!