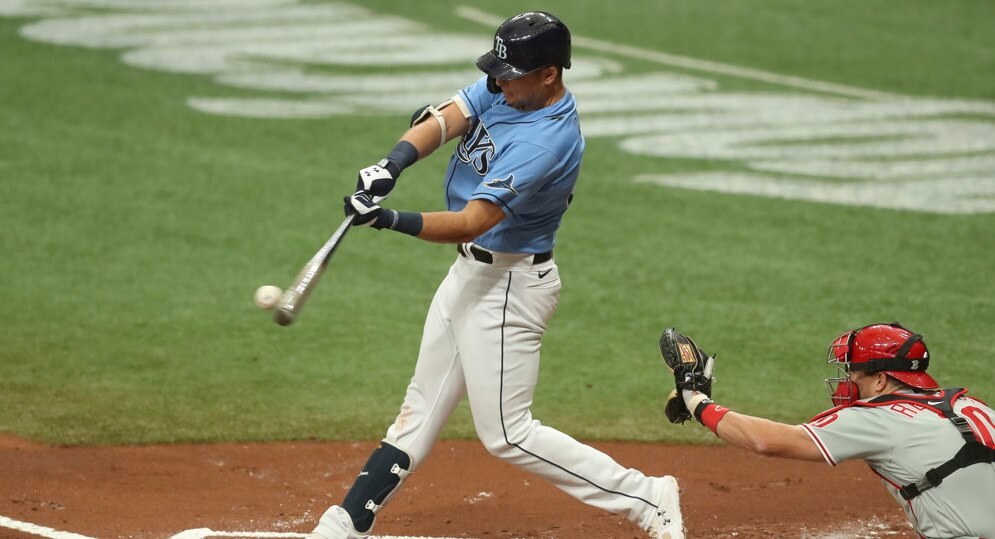 It’s that time of the year! It’s officially 2021 and with a new year comes more new fantasy baseball content. As you begin (or maybe you’re an eager mcbeaver and have already begun drafting) prepping for your drafts, it’s essential to know where draft day value lays so you’re able to build a contender that just crushes your opponents. While hitting on your early draft picks is important for your overall draft success, it’s the guys that you’re taking at the end that can set you apart from the field. The player out of nowhere that hits 20 home runs, steals 15 bases, or due to injury becomes a regular and delivers fantasy gold, when you thought they would ride the pine on your fantasy bench. Yep, it’s time to look at the potential first base sleepers for 2021 Fantasy Baseball.

For this article, we are looking at 1B outside the top-250 in ADP on both Fantrax and NFBC. These will be players that I think will outperform where they’re being drafted and be a value to your fantasy team.

Let’s get rowdy! Get it? While his stats are good in limited plate appearances, his underlying data is all the rage. Tellez slashed .283/.346/.540 in just 127 plate appearances in 2020, but this does not tell the full story on what could be a breakout 2021 for the forgotten Blue Jay. Tellez was at least in the top 79th percentile in exit velocity, expected batting average, hard-hit percentage, xwOBA, xSLG, and K%.

The strikeout percentage specifically was a huge deal as Rowdy Tellez dropped his 28% K rate each of his first two years down to barely over 15%. In other words, basically cutting his strikeout rate in half. That 12.7% difference from 2019 to 2020 actually led all of baseball and was 4% higher than the next closest player. That type of difference shows me a batter that was able to change the way he recognized and approached each at-bat.

As Tellez’s strikeout rate shot down, his BB% went up. In fact, in each of his three seasons, his walk rate has improved. The biggest jump was from year one to year two where he went from a 2.7% to 7.1% walk rate. Tellez upping that again to 8.7% again shows that the 2020 data is coinciding with changes made in 2019 to have a better at-bat each time he steps in the box.

Rowdy Tellez hits the ball hard as well and has been incredibly consistent with upping his hard-hit percentage each of his 3 seasons in the big leagues. While his launch angle was a little below average, Tellez did a decent to amazing job with all types of pitches he saw, coincidentally the fastball having the lowest xBA of the bunch at .257. I would expect that to be closer in line to his .280 or so career average the previous two seasons against the fastball in 2021. He also vastly improved against breaking pitches, jumping up .100 xBA points from 2019 to 2020.

Lastly, looking at his plate discipline, there was a lot to like here as well. Tellez’s zone swing and zone contact shot up roughly 7% each, while his overall chase percentage went down. That discipline paid off because when he chased out of the zone, his chase contact percentage went up to over 61% and got him to above league average in that category for the first time in his career.

The playing time will be the biggest question for Tellez as the Blue Jays have a stacked roster going into 2021 that could become even more formidable if they land coveted Free Agent George Springer or another bat. For now, Tellez should be able to see enough playing time to be worth drafting at his current price and is easy 30 home run power with a fairly decent batting average.

Let us dive into Mr. White here who isn’t going to be cooking up the meth, but will hopefully be cooking up home runs this season. Evan White slashed .176/.252/.346 with 8 home runs, 26 RBI, and 1 SB in 202 plate appearances in 2020. White was a rookie in this shortened 60 game season, so we only have this lump sum of games and his minor league track record to make conclusions about what we think we can expect for 2021.

Evan White hits the ball hard. His ELITE 52.5% hard-hit rate was actually in the top 5% of all of baseball. He combined that with a barrel percentage of 14.1%, which was in the top 10% in that same regard.  His walk rate was above league average and sports a great exit velocity and launch angle when the ball is put in the air. The problem was he didn’t get the ball in the air nor did he put the ball in play. The blue that you see in his profile is his horrible expected batting average and his OBSCENE strikeout rate. White struck out 41.6% of the time in 2020, which ranked in the bottom 1% of the league. While one would hope that would normalize in a full 162 game season, that can be scary to look at and have one wondering why we should expect better in 2021.

I fully expect that strikeout rate to come down closer to the mid-20 range as he showed in the minor leagues and that will in turn help increase his batting average and allow him to get closer to that .300 BABIP that he constantly saw in the minors. His elite defense should keep his bat in the lineup and his power potential provides great upside. White comes with some risk, but that upside is what puts him on our first base sleepers list.

Garrett Cooper seems to be the forgotten man in Miami and people continue to ignore his production. Cooper slashed .283/.353/.500 with 6 home runs and 20 RBI in 133 plate appearances. Those numbers are very serviceable as is but his analytics make him pop off the page even more.

Now the argument here is that the data reflects only 34 games. Even though this was in only 34 games, the data in 2019 was very similar to what he showed in 2020. If you want to talk about how much of a factor he was for the team, the Marlins went 5-1 on games Cooper homered. Cooper also  STILL ranked among the top five Marlins players in the following offense categories:

While Cooper’s numbers in the small sample were impressive, it was also encouraging to see his continued reduced strikeout rate. Garrett Cooper has seen his K rate go from 31.6% in 2018, to 26.1% in 2019, and 23.3% in 2020. This has also coincided well with his whiff rate going from 35.1% in 2018, to 23.4% in 2019, and 22.2% in 2020. What might be the most impressive is how this has led to Cooper becoming a more selective hitter while still producing as well offensively as ever. Cooper’s swing percentage this past season went down 8 percent from 2019! Expected to play a lot of first base and hit in the middle of an improved lineup in 2021, count me in for this price.

Lowe should not be as “low” as he’s ranked. I hope you think I’m very punny. Lowe slashed .224/.316/.433 with 4 home runs, 11 RBI, and 1 steal in 76 plate appearances in 2020. There are many Nate Lowe believers that will shout his name from the heaven tops now that he has a path to playing time with the Texas Rangers. Before this trade, this ADP made a lot more sense, but since the trade I believe he has unbelievably value here.

Let’s start real quick with the one glaring negative in his profile: His incredibly high strikeout rate. In 169 at-bats in 2019, Lowe had a 30% K rate that in 76 at-bats in 2020, got even worse at 36%. You won’t stay in the major leagues long with a 36% strikeout rate (league average is 21.8%). I have hope for Lowe in regards to getting consistent playing time.

When looking at his last 121 games of AAA, he showed major improvements. In 2018, Lowe went from a 24.5 K% and 7.7 BB% to in 2019 a 20.2% and 17.7% respectfully. This leads me to believe as he got more comfortable at that level, and show the type of growth he can have with every day at bats. One thing we never talk about enough is how hard it can be for a hitter to produce when they don’t see everyday playing time.

One of the big reasons I think Lowe will end up producing way more than where his ADP currently lays is his high contact rate. Lowe has a career contact rate right below league average while having a career strikeout rate of 31.8%. Now imagine how much higher that contact rate goes up and how many more balls that guy can barrel up when the strikeouts begin to come down. Lowe’s solid plate discipline, good contact skills, and barreling the ball the way he does indicates that this guy is going to figure it out, and he’s going to do so in a big way. The influx of plate appearances will provide enough counting stats at the bare minimum where it’s worth taking a gamble late in drafts on this guy. His upside is what makes him one of our top first base sleepers for 2021.

Colin Moran entered 2020 as the hopeful 3rd baseman of the future for the Pittsburgh Pirates. In 2021 after the Josh Bell trade, that has become 1st baseman of the future. Moran slashed .247/.325/.472 in 2020 and had career-highs in ISO, slugging percentage, wRC+, extra-base hits, and BB%.

Moran hit the ball extremely hard this past season as his 91.9 MPH exit velocity ranked in the 89th percentile of baseball, his 13.4% barrel rate in the 87th percentile, and his 47.2% hard hit rate in the 86th percentile. Again just like with other analytical data, all were career bests for Moran.

Moran remains a huge part of the Pirates’ success as led the Pirates in total bases (84), home runs (10), and tied for first in RBIs (23). With the expected playing time and lack of options either on the team or in the minors, Moran should provide good value here.

Others First Base Sleepers to Target:

Are you digging on David’s First Base Sleepers for 2021? For more great rankings, strategy, and analysis check out the 2021 FantraxHQ Fantasy Baseball Draft Kit. We’ll be adding more content from now right up until Opening Day!