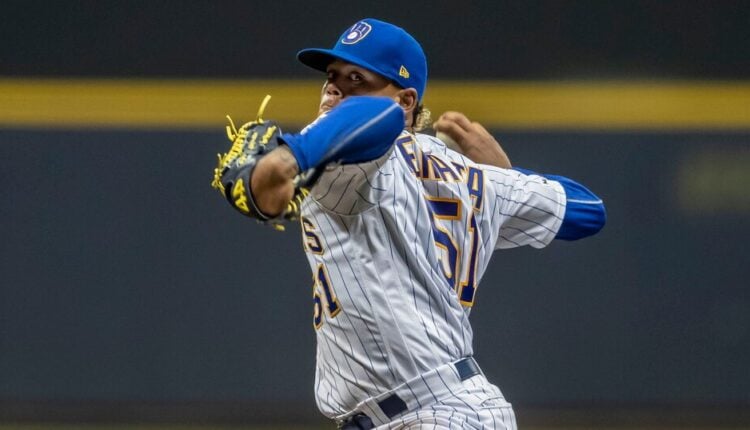 As each season passes, the lines between closer and middle reliever continue to blur. Much to our dismay as fantasy players, the most skilled relievers aren’t necessarily reserved for the ninth inning. While we’d love to draft the best players, we’ve instead been left to chase an undefined role for many teams for the sake of saves. To counter this trend, many leagues are opting for a new category, saves+holds. In this format, we draft the skills, not the role. In this article, I’ll highlight 20 middle relievers you’ll want to target for holds leagues.

Devin Williams was absolutely ridiculous last season. After a brief stint in the majors in 2019, Williams came back in 2020 with a newly developed, lethal changeup. That changeup induced a ridiculous 30.4% swinging-strike rate. While there’s some injury risk with Williams, he could be the best reliever in baseball and among the first taken in holds league drafts.

I’m going to continue banging the drum for Freddy Peralta as I did in my RP Sleepers article. With a two-pitch repertoire, the hopes of him following Corbin Burnes to ace-dom are fading. But the Brewers must have seen how valuable his versatility would be when they signed him to an extension last winter. After one start to begin 2020, Peralta was lights out in the bullpen, posting a 3.08 ERA, 1.10 WHIP, and 40% strikeout rate in 26.1 innings as a reliever. Peralta should get more volume than most relievers as the long man in Milwaukee. And he could find himself in high-leverage situations should Josh Hader or Devin Williams be unavailable.

The Twins signing Alex Colome ruined my hopes of Tyler Duffey getting a good share of saves in Minnesota. Regardless, he’s been one of the most skilled relievers in baseball over the last two seasons. With more emphasis on the curveball in 2020, Duffey raised both his ground ball and swinging-strike rates. He’ll find himself in line for plenty of holds and should help any fantasy team as a middle reliever.

Rogers stock took a nosedive the second Colome was signed. While he’ll see far fewer save chances, Rogers is still very much a skilled reliever. All of his ERA indicators point to some good regression coming. Rogers was a bit unlucky in 2020 with a 60.3% strand rate and crazy-high .400 BABIP that explains the 1.50 WHIP and the difference between his ERA and SIERA.

Another early draft darling for saves, Rainey will start the season in a setup role behind newly signed Brad Hand. His 21.7% swinging-strike rate was second in the majors among relievers, behind only Devin Williams. Rainey achieves that high mark with a nasty slider that produced an absurd 72.9% whiff rate. Health permitting, Rainey should be among the more valuable middle relievers for holds, ratios, and strikeouts.

While Gallegos couldn’t repeat the 2.31 ERA he posted in 2019, everything under the hood says he was even better. By raising his slider usage, Gallegos improved both his ground ball and swinging-strike rates, up to 41.9% and 20.1%, respectively. In a short season, one bad outing could inflate an ERA. On September 10, Gallegos failed to record an out against the Tigers, giving up three runs. It turned out he was dealing with a groin strain and was placed on the IL. Without the outing, Gallegos would have had a 1.80 ERA. Invest in this middle reliever with confidence for 2021.

Castillo had another stellar season for the Rays. He traded the four-seamer for more sliders to go with his power sinker, and the results were excellent. Castillo raised his ground ball percentage to 60.4% and improved his swinging-strike rate to a career-high 15.3%. The problem, and what caused inflated ERA indicators, was his high walk rate of 12.4%. But keeping the ball on the ground and inducing whiffs will help a pitcher overcome those peripherals. If Castillo can keep the gains and limit the walks, he could be one of the most valuable middle relievers in the game.

Fairbanks was acquired from the Texas Rangers in 2019 in exchange for Nick Solak. He began to pay dividends for the Rays last season as a valuable late-inning arm, recording six wins and seven holds. He’ll be right back in the mix alongside Diego Castillo and Nick Anderson. The WHIP left something to be desired, but that could improve with some regression to the .350 BABIP Fairbanks posted last season.

Moving to the bullpen in 2019 was the best thing Pomeranz could have done. He’s been one of the best, lights-out middle relievers in the game since. Pomeranz continued that success with another strong season and even posted a career-high 13.9% swinging-strike rate.

The Padres acquired Emilio Pagan last winter in exchange for Manuel Margot. Pagan started the season rough, but from August 1 on, he had a 2.95 ERA with 21 strikeouts in 18.1 innings. He should continue to see work behind Pomeranz and new Padre, Mark Melancon.

Before the Mark Melancon signing, I liked Pierce Johnson as a darkhorse candidate to close for the Padres. After a disaster 2018 season, Johnson pitched in Japan for a year, where he earned All-Star honors. Ditching his cutter for a curveball worked well for Johnson as he posted solid numbers across the board.

Another talented young reliever blocked from the ninth inning by a veteran signing, Jordan Romano, broke out in a big way before suffering an injured finger in 2020. A 19.4% swinging-strike rate combined with a 58.1% groundball rate will play up big time in the bullpen. Romano should be next in line for saves while accruing a good share of holds for a Blue Jays team ready to win plenty of games.

Trevor May had been consistently good for Minnesota over the last few seasons. In 2020, he raised his game even further with an improved swinging-strike rate after dropping his fastball usage. Now with the Mets, May should be the primary setup man behind Edwin Diaz.

Not many pitchers in the game can throw as hard as Staumont, who averaged 99mph on the sinker. He’ll likely remain in a setup role with Greg Holland back in town. And as exciting as Staumont is to watch, he’ll need to work on his walk rate if he’s to take a step forward.

Since the start of 2019, Marshall has a 2.45 ERA in 73.1 innings for the White Sox. While the ratios have remained excellent, Marshall has been dropping his fastball usage over the last three seasons. The results have led to more strikeouts. Marshall should continue to see high-leverage work behind Liam Hendriks for a competitive White Sox team.

Another promising young reliever in the White Sox system, Codi Heuer, had an outstanding debut season. With a high-velocity fastball and whiff-inducing slider, Heuer is primed for a long future in a high-leverage role.

After four seasons away from the game, Tyler Matzek came back in a big way last season. It wasn’t the breaking stuff we’re used to seeing from relievers that led to Matzek’s success. It was his 97mph fastball from the left side that induced a 14.3% swinging-strike rate. That’s an elite number for a fastball. Now, with Mark Melancon, Shane Green, and Darren O’Day out, Matzek should see more high-leverage situations. He’s one middle reliever I’m drafting late in for ratios and strikeouts.

Mike Mayers enjoyed himself a breakout season for the Angels. By adding a cutter, Mayers saw a 4% jump in his swinging-strike rate. While he’s no longer in line to close with Raisel Iglesias in town, Mayers could be a middle reliever worth rostering in holds leagues.

This one is a bit more of a dart throw with such a small sample, but Joely Rodriguez impressed in his return from Japan. A new changeup worked wonders for Rodriguez, as he didn’t allow a single hit off the pitch after throwing it 70 times in the limited sample. Rodriguez could be a dark horse to close if Jose Leclerc stumbled. Regardless, he should be in the mix for high-leverage work alongside fellow middle reliever Jonathan Hernandez.

Good ol’ reliable Chad Green. Green was a valuable, versatile arm out the bullpen for the Yankees with six holds, three wins, and one save in 2020. The underlying numbers are a mixed bag for Green. His .145 BABIP says he got lucky, while his 57.1% strand rate and 17.9% HR/FB rate say not so fast. One highlight, his 15.2% swinging-strike rate is a career-high, and on a good Yankees team, he should be in the mix for plenty of holds.

Are you buying into these unheralded middle relievers? For more great rankings, strategy, and analysis check out the 2021 FantraxHQ Fantasy Baseball Draft Kit. We’ll be adding more content from now right up until Opening Day!

The Next Wave of Fantasy Basketball Dynasty League Studs