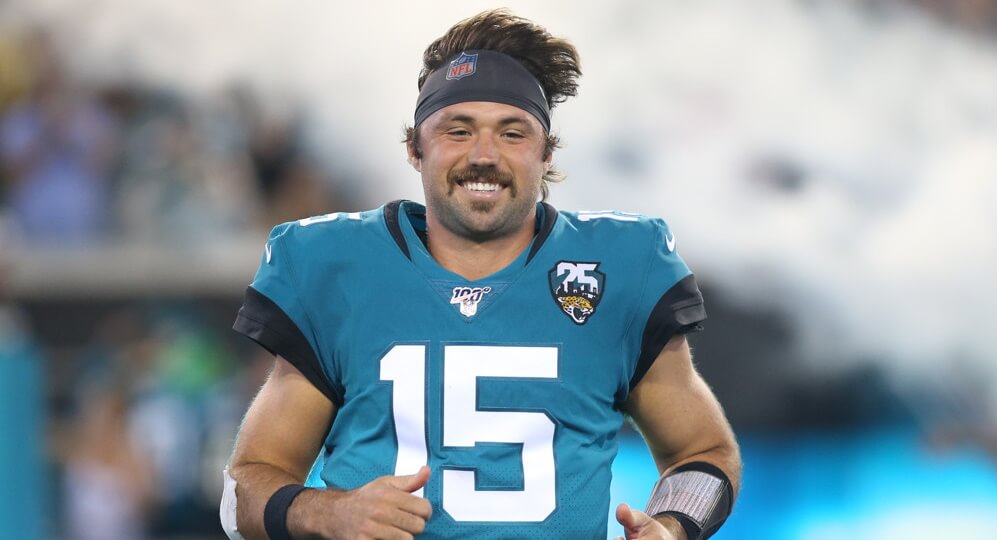 I know, everyone always has their late-round Quarterbacks that they wait on and draft after round 10. It’s a strategy I have deployed in multiple leagues for years now. These tend to be guys that you can feel comfortable in starting after not looking at the QB position for the entire draft, you pencil in the guy you know will always be there. I went a little deeper than that, to what I consider my top quarterback sleepers for this season. I am seeing more and more SuperFlex (Leagues with QB availability as a FLEX) and 2QB leagues being played each year so I wanted to get into some guys who are most likely going undrafted in traditional leagues. While they will more than likely be streamers, I believe these guys will provide some season-long value. Take the shot on them.

The Stache himself is the first quarterback that comes to mind when I think of the word “Sleepers” in Fantasy football. Jacksonville Jaguars quarterback Gardner Minshew was actually quite productive in 2019. Personally, I was not too familiar with the Jaguars rookie backup quarterback coming into 2020, but after starter Nick Foles went down with a broken collarbone after just 11 snaps in Week 1, Minshew Mania began.

Before getting into statistics, Gardner Minshew’s film is actually quite impressive from 2019. His ability to avoid sacks and extend plays behind the 26th-ranked offensive line according to Pro Football Focus, is something that translates to fantasy points. Minshew has the Fantasy floor that most late-round QBs do not. He averaged 24.6 rushing yards per game and finished 5th in rushing among all quarterbacks. His 344 rushing yards were more than both Russell Wilson and Dak Prescott finished with in 2019. Minshew’s rushing floor combined with a low turnover rate gives him a very high floor.

The Jaguars are projected to have debatably the worst defense in the NFL, which is good reasoning for Vegas’ 4.5-game win total, the lowest in the NFL. Good thing you don’t get points for wins in fantasy! What this means for me is there is going to be a lot of comeback time and positive game script for Gardner Minshew and the passing offense. I expect his rushing totals to increase and his ability to throw on the run to translate to one of the most underrated fantasy seasons in a long time. Coming off the board as QB25 according to FantasyPros ADP essentially means you can grab him with your last pick in the draft. He is one of my favorite guys to target in order to focus on depth throughout the middle rounds of the draft when the rest of your league is taking quarterbacks.

I really did try to not talk about Ryan Tannehill, but I can’t help myself. When we think of the 2019 Tennessee Titans it is hard to think of anyone other than Derrick Henry as the leader of this offense. What a lot of people don’t realize is just how good Ryan Tannehill was for this team in leading them to the AFC Championship game. I know, it is a run centric offense and it certainly will be again this season. The efficiency in the run game is virtually impossible to repeat, the Titans will need to utilize Tannehill’s playmaking ability and play-action success much more this season.

According to Pro Football Focus, Tannehill ranked first in the league in play-action passer rating at 140.6, topping Drew Brees (137.1) and Gardner Minshew (136.4). This is certainly something they will look to continue with their downfield threat in second-year wide receiver A.J. Brown. Since his first start in Week 7, Tannehill posted multiple touchdowns in each game for the remainder of the season, including 4 rushing touchdowns. The Titans posted at least 27 points in seven of those ten games, something unexpected for what is usually a ball control run offense.

Tannehill is currently going as the QB18 in drafts. I believe he is a safer option than some of the guys going ahead of him like Baker Mayfield and Daniel Jones. His upside may not be quite as high, but I don’t see a wide range of outcomes for him in this offense. I have Tannehill ranked the highest of my “Quarterback Sleepers” group in ADP and if the pass attempts increase as most expect them too, Tannehill could easily find himself as a top-10 quarterback in 2020.

Few Rookie quarterbacks have as much hype coming into the NFL as No. 1 overall pick Joe Burrow. There is so much safety and depth at the quarterback position this season, yet very few possess the upside of the LSU National Champion. The raw talent of Burrow speaks for itself, but he is coming in with high expectations as his skills are set to translate to the NFL. The 2-14 Bengals did a great job of bringing the young quarterback into a team with a lot of offensive talent. His main target, in A.J. Green, is a 7-time pro-bowler, while his number two target, Tyler Boyd, is coming off back to back thousand-yard seasons. Burrow also utilized his running back in the passing game at LSU as Clyde Edwards-Helaire racked up 55 catches in 2019. This should be a positive for Joe Mixon as well as Giovani Bernard, two proven pass-catchers in the NFL. On top of those veteran NFL options, Cincinnati also decided to add to their receiver group, drafting Tee Higgins in the second round of the 2019 draft.

I get it, it hasn’t been very tempting to draft a Bengals QB in quite some time, let alone a Rookie with no preseason under his belt. These are the concerns that have him being taken in the quarterback sleepers portion of drafts. Joe Burrow is a special prospect, his ability to make all the throws and run is an obvious recipe for fantasy success. As stated above when discussing Minshew, he will also have the opportunity, as the Bengals defense has not seen a vast improvement from their 25th-ranking in 2019. Really, the lack of NFL experience is the only knock on Burrow. I am looking past that and banking on the talent. If you have the roster space, grab Burrow with your last round pick or as a high upside QB2 and hope you hit the jackpot.

The late-round QB strategy remains effective year in and year out due to the number of difference makers at the position. It is guys like these that make the strategy worthwhile. These guys will go in the very late rounds or won’t be drafted, allowing you to focus on depth at other positions throughout the entire draft. Even in two-quarterback leagues, you will see great value here. If nothing else, keep your eye on these guys throughout the season and be a week ahead of the pack on your waiver wire. Who knows, maybe you’ll find the next 2019 Lamar Jackson.