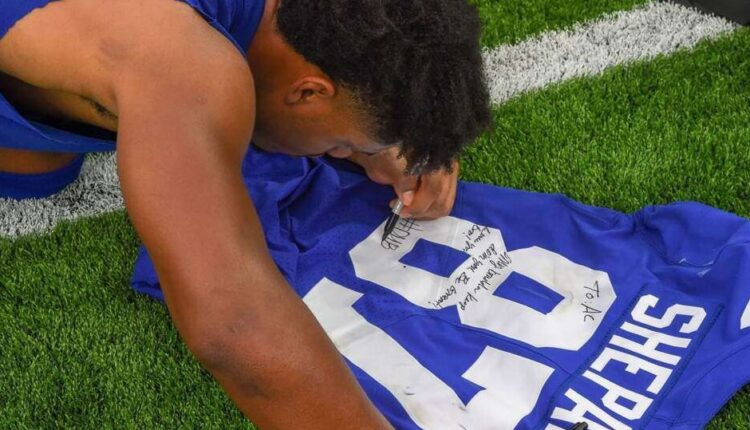 Week 6 involved a mixture of offensive explosions in the Titans and Texans game paired with un-appetizing performances for the Broncos and Patriots. Therefore, the 2020 fantasy football Week 7 waiver wire appears to lack excitement like in previous weeks. However, this week includes backup running backs to pick up with deep league options at wide receiver and tight end. With that said, let’s dive into the 2020 fantasy football Week 7 waiver wire.

We mentioned Derek Carr last week even with the Raiders having their bye week. However, don’t plug Carr into your lineup in Week 7 since they face the Buccaneers defense. Through five games, Carr passed for 1,440 yards (No. 8), 11 passing touchdowns (No. 6), and 19 fantasy points per game (No. 16). He’s also pushing the ball downfield more with 8.2 yards per attempt (No. 9) and 18 deep ball attempts (No. 14). Check if Justin Herbert is available, but Carr ranks as the top quarterback to pick up and stash in the 2020 fantasy football Week 7 waiver wire.

Check to see if someone dropped Justin Herbert with the Chargers bye week. Through four games, Herbert proved his legitimacy and upside with 298.8 passing yards per game, 8.5 yards per attempt (No. 5), nine passing touchdowns (No. 9), and 21.8 fantasy points per game (No. 9). We mention him again in case he’s hanging around on the waiver wire.

Although Teddy Bridgewater struggled in Week 6, he averaged 292.2 passing yards per game through five games. Before last week, Bridgewater ranked 6th with 1,491 passing yards paired with only six passing touchdowns (No. 22), meaning the touchdowns should increase moving forward. Bridgewater faces the Saints and the Falcons in his next two matchups. The Saints allowed the 4th most fantasy points to quarterbacks, and the Falcons allowed the most fantasy points.

The weapons around Andy Dalton should elevate him into the streaming quarterback conversation. Adjust the waiver wire rankings for Dalton based on his performance on Monday Night Football, but he projects as a streamer over the next couple of weeks.

Quarterbacks to monitor and stash in deep and Superflex leagues – Jalen Hurts and Tua Tagovailoa.

Miles Sanders left Sunday’s game with a knee injury, and thus, Boston Scott deserves mentioning as a running back to pick up in the 2020 fantasy football Week 7 waiver wire. Scott only touched the ball four times for nine yards on Sunday, and Sanders held 80.2% of the opportunities in the Eagles backfield through four games. Outside of Week 1 (the game Sanders missed), Scott surpassed 20% of the snaps only once since then. Sanders expects to miss 1-2 weeks, so Scott should be the top running back waiver wire priority.

Partway through the Bengals game, Joe Mixon left with a foot injury and then later returned. However, we’re at the point in the season where it’s a smart move to add a back up running back, such as Giovani Bernard. He even scored the first touchdown for the Bengals on a two-yard rushing touchdown. Either Bernard or Boston Scott ranks as the top running backs to pick up in 2020 fantasy football Week 7 waiver wire. When Mixon missed a game, Bernard demonstrated the RB1 potential.

Last week I mentioned J.D. McKissic in the Week 6 Waiver Wire article, and McKissic demonstrated the sneaky PPR performance once again. McKissic led the team in rushing yards with eight carries for 41 rushing yards. He also finished second on the team in catches and caught all six of his targets for 43 receiving yards. McKissic ends up in 2020 fantasy football Week 7 waiver wire as a running back to plug into lineups in case of an injury or bye weeks.

During the Ravens game, Mark Ingram left with an ankle injury but then returned in the second half. The Ravens rank 12th with 28.8 team run plays per game and lead the NFL in Game Script, meaning they often play with a lead. Edwards led the Ravens in carries with 14 rushes for 26 rushing yards and one touchdown. He ranks 11th amongst running backs with 5.6 yards per touch, and the Ravens rank 9th in run-blocking efficiency, according to Player Profiler. Pick up Edwards as he falls into this group of backup running backs worth a roster spot.

In theory, Lamical Perine projects as the most exciting running back for the Jets with his pass-catching ability. Perine held an 11.8% College Target Share (84th percentile) and should receive more touches moving forward. On Sunday, he logged seven carries for 27 rushing yards and caught two of three targets for nine receiving yards.

Jeremy McNichols looks like the backup running back behind Derrick Henry. McNichols rushed five times for 51 rushing yards and caught two passes for 11 receiving yards. In deep leagues, snag McNichols off the waiver wire if you have an open roster spot. Although McNichols bounced around, he came into the NFL with an intriguing draft profile with a 41.4% College Dominator (92nd percentile), 10.9% College Target Share (79th percentile), and an above-average 105.3 Speed Score (80th percentile).

Raheem Mostert left the Sunday Night Football game with an ankle injury, and he didn’t return. Although Jerick McKinnon likely steps up again in Mostert’s absence, JaMycal Hasty projects as a sneaky waiver wire pick up. Hasty received a decent amount of touches, especially towards the end of the game, and possibly connected to the 49ers playing with a lead. He finished the game with nine carries for 37 rushing yards. We know the running game results in fantasy production, so he’s worth a speculative pickup, especially with the 127.8 Burst Score (87th percentile).

*Update – Raheem Mostert suffered a high ankle sprain and likely headed to injured reserve. Check if McKinnon is available, but Hasty is worth a waiver wire pick up as well.

After a four-touchdown performance, Chase Claypool led the Steelers receivers in receiving yards in Week 6. The Steelers led for most of the game and only threw 23 passes as a team. Claypool caught all four of his targets for 74 receiving yards and added seven rushing yards with one rushing touchdown. Although fantasy managers likely added Claypool last week, he proved once again that he’s a must-add in all leagues.

Guess who led the Eagles receivers once again? Travis Fulgham led the team with ten targets for six receptions, 75 receiving yards, and one touchdown. He tied Zach Ertz with ten targets, but Fulgham performed decently against a stingy Ravens defense that ranked 27th in fantasy points allowed to receivers. Sure, Alshon Jeffery and Jalen Reagor should return soon, but Fulgham put up back to back performances, and that should justify adding him in the 2020 fantasy football Week 7 waiver wire.

Overall, an ugly game for the Broncos, but Tim Patrick finished with his second game in a row with over 100 receiving yards. In Week 6, Patrick caught four of eight targets for 101 receiving yards, and then in Week 5, he totaled six catches for 113 receiving yards and one touchdown. It’s worth picking up any wide receiver that puts up back to back 100 receiving yard performances.

Reports indicate that Sterling Shepard could return in Week 7, and the Giants desperately need offensive weapons. Shepard ranks as a sneaky wide receiver pick up in the 2020 fantasy football Week 7 waiver wire. Add him and stash until we see him play in a game.

Surprisingly James Washington led the Steelers in targets with seven targets for four receptions, 68 receiving yards, and one touchdown. Through four games, Washington averaged under five targets per game, and only a deep league pickup to monitor. Coming into the draft season and before Chase Claypool exploded, Washington projected as a serviceable deep league receiver.

After missing a few games, Breshad Perriman finished second on the team in targets and led the team in receiving yards. Perriman earned eight targets for four catches and 62 receiving yards. Outside of Jamison Crowder, it’s hard to recommend rostering a Jets player, but Perriman is worth monitoring in deep leagues.

Check if Dallas Goedert is available.

The Colts offense and Philip Rivers love targeting their tight ends, and Trey Burton looks like the Colts tight end to roster in fantasy leagues. Burton received five targets, four receptions, 58 receiving yards, and one touchdown. He even added in a rushing touchdown, although we don’t expect that to continue moving forward. Burton ranks as one of the top streaming tight ends to add in Week 7.

Trey Burton gets the TD.

For the second week in a row, the Vikings involved Irv Smith Jr. into the offense. Smith caught four of five targets for 55 receiving yards. Granted Smith’s production came in a game where Kirk Cousins played awful in the first half with three picks, but garbage time still counts, right? Flip a coin on Trey Burton or Irv Smith Jr., but both deserve roster spots off the waiver wire in Week 7 even if the Vikings have their bye week.

In the Titans offense, the tight end position, particularly Jonnu Smith, tends to receive a healthy target volume. Unfortunately, Smith left Sunday’s game with an ankle injury and didn’t return. With Smith injured, Anthony Firkser stepped up and caught eight of nine targets for 113 receiving yards and one touchdown. Even in the previous two games, Firkser totaled nine targets for seven receptions and 64 receiving yards. If Smith’s injury lingers and keeps him out multiple weeks, then prioritize Firkser as the top tight end to pick up in the 2020 fantasy football Week 7 waiver wire.

.@ryantannehill1 to Anthony Firkser for the @titans TD!

With Jordan Akins ruled out, Darren Fells took advantage of the matchup against the Titans, who allowed the 11th most fantasy points to the tight end position with 8.9 points per game. Fells caught six of seven targets for 85 receiving yards and one touchdown. Before this game, Fells hadn’t received more than four targets in a single game. However, we mention Fells as a deep league streaming tight end pick up.