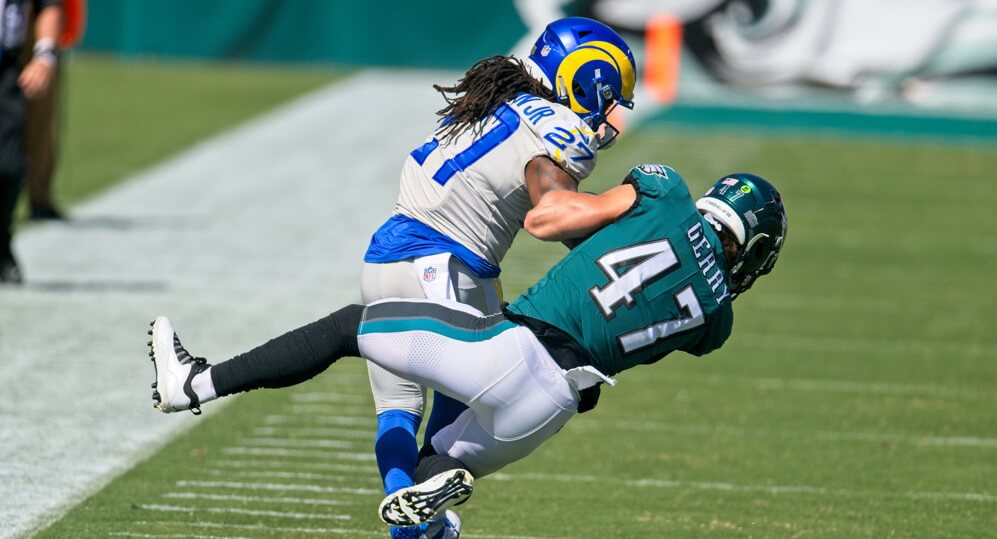 My goodness, where do we start with all the Week 2 injuries? Several of our teams are hurting with so many impactful injuries to Saquon Barkley, Courtland Sutton, Christian McCaffrey, Parris Campbell, Davante Adams, Julio Jones, Raheem Mostert, and so many more. After all these injuries, I’ll need to adjust my fantasy football rest of season rankings. We must move forward with the next player up mentality, and thus here’s the 2020 fantasy football Week 3 waiver wire. This week is full of running backs, wide receivers, and tight end pickups with all the injuries. It’s another large group, so let’s dive into the 2020 fantasy football Week 3 waiver wire.

Remember that Bud Light ad where Gardner Minshew II said to make him your first pick this year? Even if he isn’t a first-round pick, Minshew is proving the world wrong that the Jaguars are a lock for the number one overall pick in the 2021 NFL Draft. They played from behind, and Minshew went 30-for-45 with 339 passing yards, three touchdowns, and two picks. He also chipped in with 19 rushing yards. Minshew faces the Dolphins, Bengals, Texans, and Lions the next four weeks, and he’s the top quarterback in the 2020 fantasy football Week 3 waiver wire.

I’ve been working hard to be your first pick in fantasy this year, and @BudLight is making your decision easier. When you pick me first, tweet a screenshot of your pick with #budlightminshewdraft and #sweepstakes and you could win a case worth of Bud Light! pic.twitter.com/eG1B0yyJOr

Tyrod Taylor unexpectedly missed Sunday’s game with chest tightness and difficulty breathing, and rookie Justin Herbert stepped in. Herbert showed up well on Sunday with 311 passing yards, one touchdown, one interception. He also chipped in 18 rushing yards and one rushing touchdown. Chargers coach Anthony Lynn stated Taylor is their quarterback when healthy, so just a name to monitor in a deeper league or any 2-QB or Superflex leagues.

For Superflex or 2-QB Leagues

According to Adam Schefter, Drew Lock expects to miss 2-6 weeks with a shoulder injury. Jeff Driskel went 18-for-34 with 256 receiving yards, two passing touchdowns, and one interception. Driskel is more suited for deeper Superflex or 2-QB leagues.

Jimmy Garoppolo suffered an ankle injury against the Jets, and it’s suspected to be a high ankle sprain, meaning he’ll likely miss a few weeks. Nick Mullens threw 71 yards and one interception on Sunday, but the 49ers led for most of the game. Again, we’re only mentioning Nick Mullens for 2-QB or Superflex leagues.

If Joshua Kelley is still hanging on waivers, then run out and put a claim in since they’re using both Kelley and Austin Ekeler, similar to the days of Ekeler and Melvin Gordon. Now Kelley may not have the receiving skills of Gordon, but he caught two passes for 49 receiving yards against the Chiefs. Prioritize Kelley if he’s somehow hanging around on the waiver wire.

Joshua Kelley with the nice catch and run pic.twitter.com/97IK83i0nx

In most leagues, Darrell Henderson may not be available. However, if he’s somehow available, then I’d prioritize him if you need a running back. Cam Akers left the game with a rib injury, and Henderson displayed a few explosive plays to finish with 12 carries for 81 yards and one touchdown. He also caught two of his three targets for 40 receiving yards. After the game, we learned that Malcolm Brown also injured his finger, which led to limited usage for Brown at the end of the game.

Raheem Mostert didn’t return after halftime, and Jerick McKinnon showed explosiveness with limited touches. McKinnon received three carries for 77 rushing yards and a touchdown. Tevin Coleman also suffered a knee injury and he expects to miss a few weeks. All of a sudden, McKinnon is the last man standing this backfield. He’s a nice injury fill-in if you lost Barkley.

Although we typically recommend staying away from the Dolphins backfield, he’s worth a 2020 fantasy football Week 3 waiver wire pickup in deeper leagues. He finished Sunday’s game against the Bills with seven carries for 46 yards and seven targets with six catches for 36 yards. Not a league winner by any means, but if you lost Saquon Barkley like me, then he’s worth a backup bid.

Add Christian McCaffrey to the long list of key players injured on Sunday (insert tear emoji), as he left with an ankle injury late in the game. We learned CMC expected to miss 4-6 weeks with a high ankle sprain, so put a high waiver claim or FAAB bid in on Mike Davis if the previous running backs aren’t available. He finished with one carry for one yard, but then smashed in the receiving game and hauled in all eight of his targets for 74 receiving yards.

Mike Davis nabs the first down!

With Saquon Barkley injured, Dion Lewis is the next man up in the backfield. The Bears held the Giants offense in check, and Lewis received 14 touches for 56 total yards. It also wouldn’t surprise me if the Giants brought in another running back or used a committee.

There’s almost zero touchdown upside with Frank Gore or any Jets player for that matter, but he’s worth an add in deeper leagues. Gore led the Jets backfield with 21 carries for 63 rushing yards. He’s last amongst the Week 3 waiver wire pickups at running back.

There’s a saying – don’t trust Adam Gase and buy into players that no longer play for him. In back to back weeks, Robby Anderson performed well. Anderson earned ten targets for nine catches and 109 receiving yards. He led the team in receptions and finished second in targets and receiving yards behind D.J. Moore. Anderson reuniting with his old college coach, Matt Rhule, and away from Adam Gase is leading to fantasy goodness. If Anderson’s available, then he’s the top wide receiver in the 2020 fantasy football Week 3 waiver wire pickups.

This game ended up a shootout, but the Falcons didn’t need to throw as much since they had a 20-0 lead after the first quarter. Thus, the passing volume in this game doesn’t look like Week 1 against the Seahawks. Russell Gage finished second on the team in targets (9) with six receptions for 46 receiving yards and one receiving touchdown. Monitor the status of Julio Jones since he has been dealing with a hamstring injury. If Jones sits out, then Gage’s stock increases. Prioritize Anderson and Gage in the 2020 fantasy football Week 3 waiver wire.

Davante Adams left the Packers game with a hamstring injury, and Marquez Valdez-Scantling finished second on the team in targets behind none other than…Aaron Jones. The Packers crushed the Lions and outscored them 39-7 after the first quarter, meaning they didn’t need to pass a ton. Valdez-Scantling received seven targets with three catches for 64 receiving yards. He’s another receiver that ends up back on this list and worth a Week 3 waiver wire add.

In some leagues, N’Keal Harry is still hanging around. Cam Newton targeted Harry 12 times for eight receptions and 72 receiving yards. Harry led the Patriots in targets and finished with a 27% target share. In Week 1, Harry earned six targets for five receptions and 39 receiving yards. He had an elite prospect profile with a 43.9% College Dominator Rating (88th percentile), 18.7 Breakout Age (95th percentile), and 28.8% College Target Share (81st percentile). Harry also displayed an elite 109.8 Speed Score (90th percentile). Although the Patriots project as a run focused offense with Cam Newton at quarterback, Harry fits into the top group of wide receivers to add in the 2020 fantasy football Week 3 waiver wire.

With Michael Thomas expected to miss multiple weeks with a high-ankle sprain, Tre’Quan Smith is a priority wide receiver pickup on this offense. In the first half of the Monday Night Football game, Smith earned five targets for four receptions and 80 receiving yards.

Colts receiver Parris Campbell left Sunday’s game due to a knee injury, and Michael Pittman Jr. finished tied for the team lead in targets with Mo Alie-Cox. The Colts led for most of the game, and they didn’t need to pass much. Pittman finished with six targets for four catches and 37 receiving yards. He’s a tall explosive receiver listed at six feet, four inches tall and 223-pounds with a 111.2 Speed Score (93rd percentile). In deeper leagues, I’m placing backup bids and claims for Pittman.

Finding @Air4Cole in the back of the endzone 👀

Chase Claypool out here displaying his best Martavis Bryant impression with three targets for three receptions, 88 receiving yards, and one touchdown. Almost all of his yardage came off an 84-yard touchdown reception in the second quarter. I typically trust the target share with wide receivers, but Claypool is an explosive receiver with a 129.8 Speed Score (99th percentile) and 131.9 Burst Score (92nd percentile). If Claypool receives more targets, then we’ll see more explosive plays. Keelan Cole has the safe PPR play, while Claypool has boom potential with the speed and explosiveness to take any catch to the house.

We’re going back to the well with Logan Thomas. He finished second on the team in targets (9), but he wasn’t as productive with four catches for 26 yards. Be patient and follow the 26% and 27% target share in both games.

With Blake Jarwin lost for the season, Dalton Schultz stepped up in Week 2 and led the Cowboys with ten targets. Schultz finished the game with nine receptions for 88 receiving yards and one touchdown. If you’re hurting at tight end, he’s one of the top 2020 fantasy football Week 3 waiver wire pickup at the tight end position.

Who remembers former VCU basketball player Mo Alie-Cox on the hardwood? I sure do, and football fans waited to see Alie-Cox on the football field. With Jack Doyle injured, Alie-Cox exploded in Sunday’s game with six targets for five catches and 111 receiving yards. We know Philip Rivers loves the tight ends, so add tight end Alie-Cox, especially in deeper leagues.

TE Mo Alie-Cox will not be ignored. pic.twitter.com/oehH9En0VJ

The 49ers game on Sunday seemed like a comeback game for Jerick McKinnon and Jordan Reed. With George Kittle ruled out of the game, Jordan Reed exploded and led the 49ers in targets (8) for seven receptions, 50 receiving yards, and two touchdowns. Kittle expects to return in Week 3, but Reed’s worth mentioning since the 49ers love utilizing the tight ends.