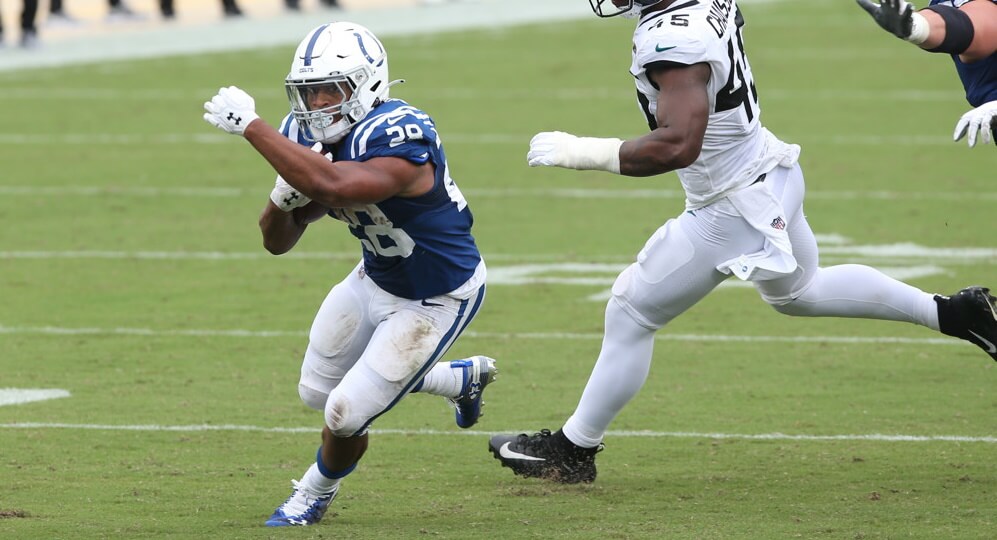 After an exciting first week of action in the NFL, we now know much more than we did in the off-season. There is a better sense of certain players playing time. The Jaguars are not as bad as they were made out to be. And last, the games are just as entertaining without fans in the crowd. Let’s see what all this means for our Week 2 PPR Rankings.

Some notable risers include Jonathan Taylor, who will receive the bulk of carries behind an elite Colts offensive line. After a season-ending injury to starter Marlon Mack, Taylor looks to be a lock for 15-20 touches a game. This firmly places him in the RB1 group. JuJu Smith-Schuster looks to have rekindled his connection with Ben Roethlisberger. Perhaps people forget, but he is only one season removed from being a top 10 fantasy wide receiver. And despite missing on some bad throws, Josh Allen could be turning into the next breakout quarterback after leading the position in scoring in Week 1.

Amari Cooper, Michael Gallup, and CeeDee Lamb draw the Atlanta Falcons, who possibly have the worst secondary in all of football. Cooper is my WR 5 on the week, Gallup is the WR 17, and Lamb is the WR 33.  Naturally, the guy throwing them the ball receives a massive upgrade as well. Dak Prescott is the QB 2 in my Week 2 PPR Rankings, boldly ranked above Patrick Mahomes.

At running back, the previously mentioned Jonathan Taylor is all the way up to the RB 11 on the week. Taylor should see close to 20 touches. If you watched his Week 1 game against the Jaguars, you saw what the hype was all about. Taylor looks eerily similar to Saquon Barkley when he gets in the open field. Also of note, his teammate, Nyheim Hines, receives a massive bump. Do not be surprised to see Hines lead all running backs in targets going forward. He is the RB 21 for the week. The Colts draw the Minnesota Vikings who were just carved up by Aaron Rodgers and the Packers.