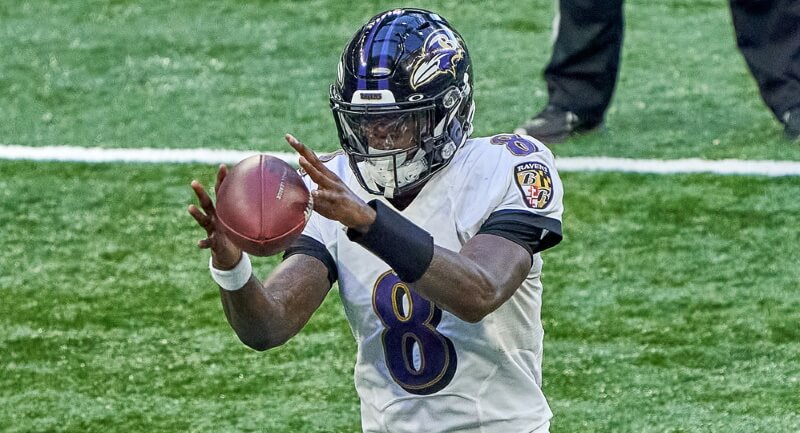 It’s officially the eve of the playoffs as we head into the Week 13 PPR rankings. There continues to be movement in all directions, so be sure to stay caught up throughout the week, as the rankings will fluctuate. Hopefully, these PPR rankings can help propel teams to victory, and a chance at the league championship!

Even though he is currently out on the COVID-19 reserve list, Lamar Jackson comes in as the QB4 after having an up and down season. It is Jackson’s highest ranking in weeks. With that said, he has finished as a top 10 quarterback in four separate weeks. Obviously, I expect there to be a fifth against the Cowboys. If Ryan Fitzpatrick is the man in Miami, he comes in as the QB11 in these Week 13 PPR rankings. Nonetheless, it is possible that Tua is named the starter, which would crush any fantasy appeal of Fitzmagic.

Some quarterbacks that aren’t exciting this week include Matt Ryan, Carson Wentz, and Andy Dalton. Ryan will go against the Saints now great defense. The last time he faced them he was the QB26. Don’t expect that to change much. On the other end of the fallers, Carson Wentz continues his mammoth decline. He checks in as the QB22 against a vulnerable Green Bay defense. Unfortunately, Wentz and the Eagles have shown they are incompetent against anyone they face.

Even though this is PPR rankings, Derrick Henry and Nick Chubb are simply too good carrying the rock. It doesn’t matter how many targets they get, as they are arguably the two best runners in all of football. Consequently, Chubb comes in as the RB4, while Henry comes in as the RB5 in the Week 13 PPR rankings. Wayne Gallman continues to show that is he is the starting running back for the Giants, he is an RB1. He has scored in five consecutive games.

Even though he checks in as the RB11 in my Week 13 PPR Rankings, Miles Sanders stock has been plummeting in recent weeks. For whatever reason, the Eagles refused to give him carries against a vulnerable Seahawks defense, despite being in the game all night. They have upped the usage of Boston Scott as well. Sanders is looking like a volatile RB2 the rest of the season.

Tyreek Hill comes in as the WR1 following his insane 58-point output. He has finished as a top-five receiver in PPR the past four games he’s played in. If his target share maintains, Hill now looks like the locked-in WR1 overall. A.J. Brown should be a volatile, non-dependable receiver with his target totals each game. However, he is the best receiver in football after the catch, giving him a safe WR2 floor, even in PPR formats. He checks in as the WR7 in the Week 13 PPR rankings.

Keenan Allen saw a dip in targets with the return of Austin Ekeler, and I don’t expect that to change much week in and week out. While Allen is still a safe WR1, he isn’t the potential overall WR1 that we saw for weeks without Ekeler.

Don’t let Zach Ertz come in and ruin a good thing with Dallas Goedert. While this is not meant to disrespect one of the all-time great tight ends, Goedert simply looks like he could be one of the best tight ends in football. Even in a terrible offense, Goedert has finished as the TE4 and TE1 in the past two weeks. He is the TE2 in the Week 13 PPR rankings. Also, be excited about T.J. Hockenson and Hunter Henry, these two have been consistent all season, and look like safe top five options at the position.