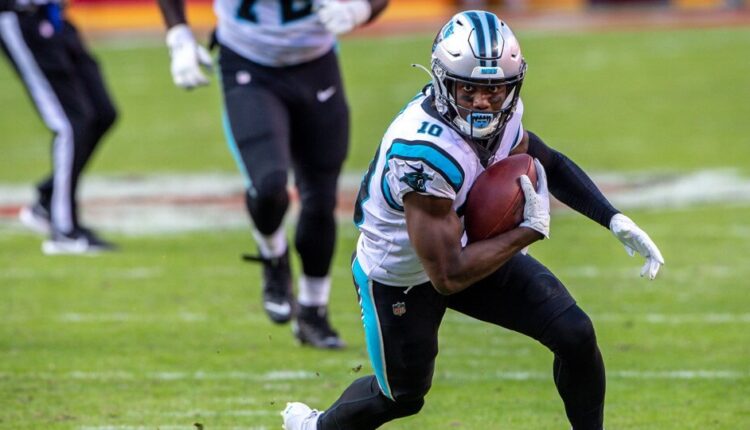 As football fans, we watched Christian McCaffrey return and total domination by Aaron Rodgers and Davante Adams on Thursday night. Even rookie Jake Luton made an appearance and threw for over 300 yards passing in his NFL debut. Thus, we mention him in the 2020 fantasy football Week 10 waiver wire. It feels odd mentioning this name, but Kalen Ballage even popped on Sunday due to an injury to Justin Jackson (insert sad face here). Per usual with the fantasy football Week 10 waiver wire, we dive into a few players at each position with reasons why we like them. With that, let’s dive in.

In his second career game, Tua Tagovailoa threw for 248 passing yards on 28 attempts with two passing touchdowns and also added seven carries for 35 rushing yards. Tagovailoa looked efficient and distributed the ball around. Next week they face the Chargers, who allow the 4th most fantasy points to quarterbacks. Then the Dolphins face the Broncos, Jets, and Bengals, all of which rank friendly to quarterbacks. Tagovailoa ranks as the top quarterback to pick up for Week 10 and moving forward.

As a deep league streamer, Drew Lock picked it up in the second half of the game against the Falcons, particularly in the fourth quarter. He finished the game with 313 passing yards, two passing touchdowns, and one interception. Lock also led the Broncos with 47 rushing yards with a rushing touchdown. They face the Texans, who allow the 9th most fantasy points to quarterbacks at 21.3 points per game. Thus, Lock ranks as one of the top quarterbacks to pick up in the 2020 fantasy football Week 10 waiver wire.

Jake Luton took advantage of a friendly matchup against the Texans in his first NFL start. Before this game, the Texans allowed the 9th most fantasy points to the quarterback position. He threw for over 300 passing yards, one passing touchdown, and one interception. Luton even added a 13-yard rushing touchdown. Next week they face the Packers and expect the Jaguars to play from behind, meaning potential high passing totals in Week 10.

Add Chase Daniel since Matthew Stafford suffered a concussion late in the game in Week 9.
Nick Mullens threw for 291 passing yards, one passing touchdown, and one interception. It looked ugly at times throughout the game with no George Kittle, Deebo Samuel, or Brandon Aiyuk.

David Johnson left the game with a concussion, and thus Duke Johnson enters the fantasy realm once again. Fantasy managers, including myself, wanted Duke Johnson to receive more touches at almost every previous stop. Against the Jaguars, Johnson totaled 16 carries, 41 rushing yards, and one rushing touchdown. He also added four catches and 32 receiving yards. Next week, the Texans face the Browns, who rank middle of the pack with 17.9 fantasy points allowed (No. 17) to the running back position. If David Johnson misses Week 10, then Duke Johnson ranks as the top running back to pick up in 2020 fantasy football Week 10 waiver wire. Even in some deep leagues, fantasy managers may have dropped Duke Johnson.

Last week, we mentioned Jordan Wilkins in the Week 9 waiver wire article, and he led the Colts running backs in touches. Wilkins ended with 11 carries, 39 rushing yards, two catches, and -1 receiving yards. Against a stingy Ravens defense, the Colts offense struggled as a whole. The Colts play the Titans, Packers, Titans again, and the Texans in their next four games, all of which give up a ton of fantasy points to running backs. Wilkins ranks as more of a running back to stash or plug into a flex spot in deep leagues but deserves mentioning once again in the 2020 fantasy football Week 10 waiver wire.

With Chris Carson and Carlos Hyde injured, DeeJay Dallas led the Seahawks backfield once again. The overall production for Dallas doesn’t look great in Week 9, with nine touches for 39 total yards and one rushing touchdown. However, they played from behind the entire game, and the Bills limited their run game. We mention Dallas once again in case he’s available on the waiver wire since he looks like one of the top backup running backs to stash once Carson returns.

It’s worth mentioning Tyler Ervin with Jamaal Williams ending up the reserve/COVID-19 list. Ervin totaled eight carries for 24 rushing yards and caught four passes for 48 receiving yards. Although he’s more of a receiver, Ervin can provide some deep-league PPR value, especially against the Jaguars next week.

Justin Jackson left the game with a knee injury, and he received zero touches. None other than Kalen Ballage led the Chargers backfield with 15 carries for 69 receiving yards and one touchdown. He also caught two of three targets for 15 receiving yards. With all the jokes surrounding him having feet for hands, it’s hard to overlook a running back given 15-17 touches. Assuming Justin Jackson’s injury doesn’t linger, then Jackson and Joshua Kelley should typically lead this backfield in touches moving forward. However, for now, Ballage is worth a stash in deep leagues in the 2020 fantasy football Week 10 waiver wire.

With the much-anticipated return from Christian McCaffrey, none other than Curtis Samuel led the Panthers in receiving yards. Samuel caught nine of nine targets for 105 receiving yards and one receiving touchdown. He also added 13 rushing yards on the ground. Sneakily Samuel averaged at least five targets over the past three games but exploded in terms of receiving yards for the first time in Week 9. He now scored a touchdown in the three straight games, but the intrigue surrounds the increased involvement in the passing game. Samuel ranks as one of the top wide receiver pickups in the 2020 fantasy football Week 10 waiver wire.

For three quarters on Sunday against the Titans, the whole Bears offense sputtered until the fourth quarter, where they scored all 17 of their points. We mentioned Darnell Mooney last week, and he deserved mentioning once again. Mooney led the Bears with 11 targets and caught five of them for 43 receiving yards. Since they played from behind a ton, Nick Foles threw a season-high 52 passes. Next week, they face the Vikings, who have a beatable defense allowing the second-most fantasy points to the wide receiver position.

With T.Y. Hilton ruled out, Michael Pittman led the Colts receivers in receiving yards. In his second game back from his injury earlier in the season, Pittman caught four of seven targets for 56 receiving yards. As a tall rookie receiver listed at 6-foot-4, Pittman showed speed coming into the league with a 111.2 Speed Score (93rd percentile). With the lack of options in the passing game for the Colts, maybe Pittman steps up. Consider him a deep league option in the 2020 fantasy football Week 10 waiver wire until we see more consistent production.

Surprisingly, Richie James exploded against the Packers on Thursday night. Before this game, he hadn’t received a single target, but James stepped up with the entire receiving core banged up. He caught nine of 13 targets for 184 receiving yards and one touchdown. Temper expectations, as we don’t expect consistent or continued production for James when Deebo Samuel and Brandon Aiyuk return.

Dalvin Cook dominates for the Vikings offense once again on Sunday. Many people, including myself, said no way Kirk Cousins throws 14 passes as he did in Week 8 against the Packers. Well, Cousins only threw 20 passes instead, which leads to inconsistent fantasy production amongst all Vikings pass-catchers. On Sunday, Irv Smith Jr. caught two of four targets for ten receiving yards and two touchdowns. After back-to-back games with five targets each in Week 5 and 6, Smith received five targets for three catches total in the past two weeks. Some risk here with Smith, but he ranks as the top tight end in the 2020 fantasy football Week 10 waiver wire.

Last week, I mentioned Ross Dwelley since I didn’t expect Jordan Reed to return. However, Reed returned and caught one pass for three receiving yards. Dwelley finished second on the team with 52 receiving yards and caught all three of his targets. My gut says prioritize Reed, but Dwelley is intriguing as well.

If you enjoyed Corbin’s Week 10 Waiver Wire, make sure to check Peter Chung’s Week 10 FAAB Guide for more help in optimizing your lineups.