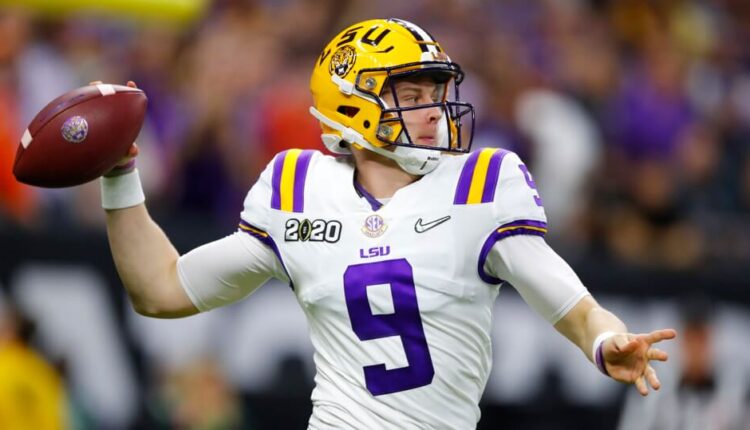 Right now, the NFL is the only game in town. While the rest of the sports world has been locked down by the Covid-19 pandemic, the National Football League has soldiered on. And while free agency is still front and center at present, before you know it, the NFL draft will (hopefully) be here. You know what that means; our first round of rookie rankings is here!

The NFL Draft is going to be very different than in recent years. There aren’t going to be hundreds of thousands of fans descending on Sin City this year. In fact, the draft now won’t even be held in Las Vegas this year. It’s going old school—rather than glitz, glamour and green rooms it will just be teams calling in picks to the NFL’s offices.

There also aren’t going to be any pro days. Or private workouts. It appears that February’s scouting combine (and the hours of game tape that came before it) are the last look NFL teams will get at this year’s top prospects.

However, while the circumstances of this year’s draft will be vastly different, one important thing remains the same. Soon enough, hundreds of young players will be entering the NFL, whether it’s via the NFL draft or the flurry of UDFA signings that comes after.

And that means a massive new crop of talent for fantasy football managers to drool over and add to rosters—first in dynasty formats and then later this summer in redraft leagues.

Before we get to the rookie rankings, a caveat—and it’s a whopper.

For all intents, these rankings are for this year’s rookie class of NFL prospects. The reality is that situation plays almost as significant a part in fantasy value as talent. Once we know who is playing where, these rookie rankings are going to change quite a bit.

But given that so many of us have nothing but time on our hands, might as well get a head start on some rookie draft pick.

With that in mind, here’s a look at my top-five rookie quarterbacks and tight ends and top-10 running backs and wide receivers in 2020.

1.) Joe Burrow, LSU: We at least have a good idea where Burrow’s going—first overall to a Cincinnati Bengals team with a decent array of skill-position talent, a so-so offensive line and a defense that was stinky poo in 2019.

2.) Tua Tagovailoa, Alabama: Were his health and durability not huge question marks, an argument could be made for Tagovailoa as the best quarterback in Class of 2020. But they are—there’s a real chance he won’t plat at all in 2020.

3.) Justin Herbert, Oregon: There was a time when Herbert looked like a sure-fire superstar, and at his best, he can sling it as well as anyone in this year’s class. But consistency was an issue for the 6’6″, 236-pounder later in his collegiate career.

4.) Jordan Love, Utah State: Love has all the tools that NFL teams covet under center—size (6’4″, 224 pounds), athleticism and a big right arm. But his 2019 game tape isn’t nearly as good as the year before, making Love something of a risk/reward pick.

5.) Jacob Eason, Washington: Strictly from an arm talent perspective, Eason’s one of the best quarterback prospects in this class. But his career with the Huskies was up-and-down, and his short and intermediate accuracy came and went in college.

1.) D’Andre Swift, Georgia: Swift wasn’t the most productive tailback in college football last year, but his well-rounded skill set is tailor-made for the NFL. If the 5’8″ 212-pounder were to land somewhere like Kansas City, he could be an immediate difference-maker in fantasy leagues.

2.) Jonathan Taylor, Wisconsin: Taylor’s one of the most productive running backs in NCAA history, topping 2,000 rushing yards each of the past two seasons. His workload in Madison is a concern, but Taylor has workhorse potential from Day 1.

3.) J.K. Dobbins, Ohio State: All Dobbins did in 2019 was top 2,000 yards on the ground and become the all-time leading rusher at a school that has churned out NFL backs with regularity over the years. He’s a punishing runner, but his pass-catching chops are a question mark.

4.) Clyde Edwards-Helaire, LSU: Edwards-Helaire was outshined by Burrow in Baton Rouge in 2019, but the 5’7″, 207-pounder is a compact, violent runner and capable receiver who could easily develop into a three-down back in relatively short order.

5.) Cam Akers, Florida State: Akers averaged five yards a carry and scored 14 touchdowns in 2019 for a bad Florida State team. He’s a talented, well-rounded runner, but ball security issues and a lack of explosiveness are areas of concern for NFL teams.

6.) Eno Benjamin, Arizona State: Benjamin didn’t test especially well at the combine, but he shined at the Senior Bowl and for the Sun Devils. He’s a bit undersized and has an unorthodox running style, but he’s shown the ability to get the job done in the past.

7.) Zack Moss, Utah: The 5’9″, 223-pound Moss is a throwback-type runner—a between-the-tackles bruiser who would just as soon initiate contact as avoid it. His NFL success could depend largely in landing in a scheme that accentuates his strengths.

8.) A.J. Dillon, Boston College: At 6’0″ and 247 pounds, Dillon is a load of a running back. But he’s also a smart and physical runner who has quite a bit more burst than one might at first think given his size. He had a heavy workload in college though, leaving some to question his long-term durability.

9.) Anthony McFarland, Jr., Maryland: McFarland is all kinds of explosive—the 5’8″, 208-pounder averaged almost eight yards a carry at Maryland in 2019 and peeled of a 4.44-second 40 time at the NFL Scouting Combine in February.

10.) Ke’Shawn Vaughn, Vanderbilt: At 5’10” and 214 pounds, Vaughn has prototypical NFL size. He’s also a punishing runner who isn’t easy to bring down on first contact. But he’s not especially slippery and would be best-suited in a one-cut zone-blocking scheme in the pros.

1.) CeeDee Lamb, Oklahoma: Lamb’s got just about everything an NFL team could want in a receiver—he’s got good size at 6’2″, good speed, he’s quick in and out of breaks, can high-point the ball and has good hands. He should make a statistical impact early in his NFL career.

2.) Jerry Jeudy, Alabama: If you wanted to rank Jeudy ahead of Lamb I wouldn’t call you crazy—the top three or four wide receiver prospects in the rookie rankings are all pretty closely packed together. It’s a good year to be looking for help at the position.

3.) Justin Jefferson, LSU: When last we saw Jefferson, the 6’1″, 202-pounder was making Clemson’s defense look terrible in the National Championship Game. Jefferson was ridiculously productive with the Tigers and has WR1 upside in the pros.

4.) Henry Ruggs III, Alabama: Ruggs won the title of the fastest man at the 2020 combine, peeling off a 4.27-second 40-yard dash. That speed makes Ruggs a threat to score any time he touches the ball, although he needs to get better against more physical press coverage.

5.) Tee Higgins, Clemson: If you’re an NFL team (or fantasy drafter) looking for a lanky red-zone threat who will win contested catches, then Higgins is your guy. The 6’4″ 215-pound Clemson star scored 13 touchdowns in 2019 and has drawn comparisons to A.J. Green.

6.) Laviska Shenault Jr., Colorado: Shenault may have run a 4.58-second 40-yard dash at the combine, but there’s isn’t a person on earth who believes that Shenault is that slow. His physical traits and ball skills are both very impressive, and he’s more than capable of making a Day 1 impact.

7.) Brandon Aiyuk, Arizona State: That Aiyuk is ranked this low is less an indictment of him than it is an indicator of just how ridiculously deep this year’s class is at wide receiver. The 6’0″ 205-pounder averaged over 18 yards a catch in 2019 and was one of the nation’s top return men.

8.) Jalen Reagor, TCU: Like more than a few young receivers nowadays, Reagor needs to improve his route-running and concentration as he develops as a player. But he’s an absolutely electric home-run threat with a football in his hands who will also help out in the return game.

9.) Denzel Mims, Baylor: In just about any other draft class, Mims would be a no-doubt first-rounder—he’s a 6’3″ wideout with 4.38-second speed and a 38.5″ vertical. However, his route tree needs work and he struggled with drops at times in college.

10.) Michael Pittman Jr., USC: Pittman doesn’t have game-breaking speed, but he’s a big-bodied 6’4″ target who was reliable and won contested catches with regularity at USC. Being a “possession” receiver isn’t necessarily a bad thing for fantasy drafters.

1.) Cole Kmet, Notre Dame: An athletic 6’6″, 262-pounder, Kmet’s blend of size and wheels has earned him comparisons to Rob Gronkowski. He’s easily the No. 1 tight end prospect in the Class of 2020, and he’ll probably come off the board early in Round 2.

2.) Harrison Bryant, Florida Atlantic: The 6’5″, 243-pound Bryant won the Mackie Award in 2019 as the nation’s top tight end after hauling in 65 passes for 1,004 yards and seven scores. He’s a bit raw, but there’s quite a bit of athletic upside present.

3.) Adam Trautman, Dayton: Trautman has the size and athleticism that NFL clubs covet in a tight end nowadays, but like so many youngsters at his position his route-running and blocking ability are both very much a work in progress.

4.) Hunter Bryant, Washington: At 6’2″ and 248 pounds, Bryant is as much an oversized slot receiver as a true tight end. An athletic pass-catcher who has drawn comparisons to Jordan Reed, Bryant will need the right scheme to thrive in the NFL.

5.) Albert Okwuegbunam, Missouri: Rolling the dice on Okwuegbunam is all about upside. He’s a very raw prospect as a receiver and not much of a blocker, but he has 4.49 speed at 6’5″ and 258 pounds and is excellent at high-pointing the football.

Got a beef with Gary’s 2020 rookie rankings? Call him out in the comments below!