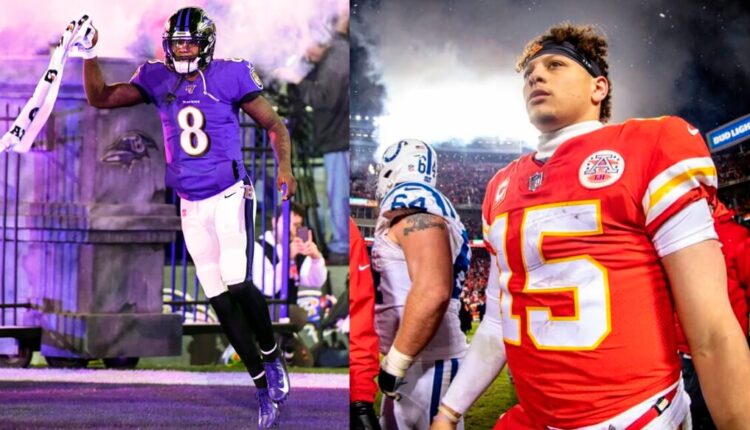 Amidst all the Coronavirus chaos, we don’t know exactly what the NFL season might look like, but by all appearances, we are going to have a season and we’re all happy about that. Of course, along with that season comes another welcome respite from the harsh realities of 2020; fantasy football! And to kick off the festivities this year, we’re gonna break out the 2020 FantraxHQ Quarterback Rankings.

As you’ve likely heard a few million times, the NFL is more of a passing league than ever before. A bit ironically though, one of the main factors affect our quarterback rankings this year is the increasing number of quarterbacks who derive much of their fantasy value on what they can do with their legs. In fact one of the big questions in this year’s drafts is which QB will come off the board first. Will it be the more traditional gunslinger, Patrick Mahomes, or does Lamar Jackson break out of the pocket as the No. 1 quarterback? If the results of our early quarterback rankings are any indication, the answer to that question could swing either way in every league.

For the other skill positions, we’ll generally have four or five analysts involved in our rankings, with some involved in PPR and some in Standard Scoring. With quarterback rankings pretty much unaffected by the format, we’ve got a field of seven analysts for you to draw from. As always we welcome you to share your thoughts with them, either in the comments below or on Twitter. Here’s the team that will be involved in all of our fantasy football rankings this season. We’ve included their initials, so you know who’s who in the rankings tables, and also their Twitter handles so you can give them a quick follow there.

In order to give you a bit of context on their quarterback rankings, we asked our analysts to share some of their thoughts on the position for the 2020 season.

As has been the case in the last few years, the quarterback position is plenty deep. Add that to the list of reasons that SuperFlex formats should become the industry standard. While the position has plenty of solid options, that does not mean you should automatically wait to draft a quarterback. In a 12-team, one-QB league, you need to have a quarterback that will put up big numbers more often than not. Lamar Jackson finished as the weekly overall QB1 four times and the overall QB2 four other times in 2019. Overall, Jackson was a weekly top-six fantasy quarterback in 11 of 15 games last season. No other quarterback reached that threshold more than six times. That is a tremendous advantage in a head-to-head format. I normally do not advocate drafting quarterbacks early. However, I would not mind securing Jackson or Patrick Mahomes if they fall to me in drafts.

If someone else in my league wants to reach for Jackson or Mahomes, several other quarterbacks have high fantasy ceilings. For me, Dak Prescott, Kyler Murray, Deshaun Watson, and Russell Wilson are a tier above the other quarterbacks. All offer big upside in the passing game, while their contributions on the ground provide a safe floor. I would be happy with any of these six quarterbacks as my weekly starter in 2020 fantasy leagues. If I cannot secure one of these top six, I will make sure to double-dip on quarterbacks later in the draft and play the streaming game. There are probably an additional 20 signal callers who can be fantasy relevant in any given matchup. Going this route could adversely impact depth at other positions, however, so that is something worth keeping in mind.

Quarterback is as deep and bountiful as a classic Thanksgiving dinner for 2020. The centerpiece, or turkey if you will, is easily Lamar Jackson. A 2019 league-winner, he will cost you a second-round pick, one that I am unlikely to pay at that cost. He faces steep regression in TD%, and with his slight-ish frame, could get injured with all his rushing. Patrick Mahomes isn’t much cheaper and doesn’t offer a ton of ROI potential, although both have elite floors.

There are a handful of tasty side dishes beyond those two. Dak Prescott, Kyler Murray, Russell Wilson, and Deshaun Watson all have impressive ceilings with high floors as well thanks to their rushing abilities. There is another large tier behind them with plenty of capable QB1’s who you won’t have to draft until the rest of your offense is set. Cam Newton is immediately an upside play in New England. Even sleepers such as Joe Burrow, Daniel Jones, and Drew Lock have the upside to pop if you want to stash them as upside bench picks.

The quarterback position this year is extremely deep. Every single NFL team has a fantasy relevant quarterback and that makes me want to move all my leagues to superflex formats. We know rushing quarterbacks provide a great floor and I’m targeting those this year. I usually wait on quarterback, but I plan on targeting Dak Prescott, Russell Wilson, Deshaun Watson, and Josh Allen.

Other mid round quarterbacks I like are Carson Wentz and Daniel Jones. If I miss out on those guys, then I’m going after high volume passers like Matt Ryan or Matt Stafford. There are so many quarterbacks I like this year, even some deep sleepers like Gardner Minshew and Teddy Bridgewater that I find intriguing.

If we’re heading into a draft together I can assure you of one thing, none of my early-round picks are going to be quarterbacks. If by some miracle Mahomes or Jackson fall to the back of the fourth round, I would entertain the idea. Let’s be real though, that will rarely if ever happen. The sweet spot of the draft where I start looking at the position typically begins in the ninth round.

Here’s a fun fact. Last season, 40 different quarterbacks posted at least one top-12 performance. Translation: If the guy you draft is a bust, you can always look to waivers. When it comes to positional depth, the player pool here is a bottomless well, which in turn devalues their place on your roster. Unless you’re playing in a SuperFlex league, you only start one quarterback every week. Additionally, the point disparity between quarterback tiers is much smaller than the ones between running backs and wide receivers. In a nutshell, there’s far less pressure to get a solid quarterback than there is at any other position.

We’ll be busting out the 2020 Fantrax Fantasy Football Draft Kit in full very shortly. Until then check out all of our Offseason Fantasy Football Content to catch you up on all the latest news.