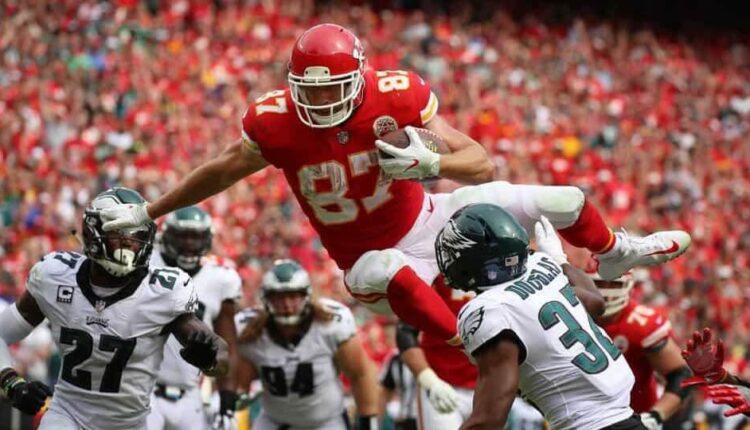 Not only do I make New Year’s resolutions, but I also reflect on the past year. The 2020 season has been a wild ride, and it is time to memorialize the fantasy football stars for the history books. I assembled a team of Pro Bowlers for the Scholar’s Fantasy Football Awards to assist me recognizing the preeminent alternative-reality players.

Say what?! Your dynasty football league wasn’t hosted on Fantrax this season? Unthinkable! Check out all the features Fantrax has to offer, and we think you’ll be singing a different tune for next season.

Four fantasy football Fantrax writers—Mick Ciallela, Peter Chung, Ahaan Rungta, and Corbin Young—joined me to vote on their top three players in seven fantasy football categories. The results were totaled, and the top fantasy performers are listed below.

Quarterback of the Year

As many predicted, through 16 weeks, Patrick Mahomes was the No. 1 quarterback in fantasy football. The former MVP notched a total of 40 touchdowns (38 passing and 2 rushing) and led the league with 4,740 passing yards while throwing only six interceptions. Mahomes was a model of consistency, tossing a touchdown in each of his 15 starts, and in 6-points, per-touchdown leagues he scored over 30 points on seven occasions and only had one game with less than 20 fantasy points. My award winner, however, is the now-frontrunner for NFL MVP, Aaron Rodgers.

While Mahomes’ performance earned him the spot as the top overall fantasy player of 2020, his cost this year was likely sky-high and wouldn’t have been justified if he finished any worse than he did. In re-draft leagues, Mahomes was often taken as early as the second round and in 2-QB/Superflex leagues, he was probably a First-round pick.

On the other hand, Rodgers, who finished as the QB No. 7 of 2019, was a man on a mission this year, heavily correcting a wobbly season in the previous year. He finished the fantasy campaign (Weeks 1-16) leading the league in passing touchdowns by a commanding margin (career-high 44 with Mahomes and Wilson tied for second at 38) and threw only five interceptions. Like Mahomes, he was a consistent machine and unlike Mahomes, he didn’t cost an early-round pick.

Apart from a complete beatdown in Tampa Bay in Week 6, Rodgers averaged 31.5 fantasy points in 6-point per-touchdown leagues, and in Weeks 14-16, he was clutch for his playoff managers, scoring 10 touchdowns and turning the ball over only once. Rodgers was the biggest value pick at the quarterback position in all formats in his redemption tour, earning the future Hall of Famer my first-place vote.

Running Back of the Year

For me, choosing the best running back in fantasy is as difficult a decision as it has been in years. By the slimmest of margins, I chose Dalvin Cook over Alvin Kamara. Cook is the only non-quarterback to average over 20 fantasy points per game in standard leagues this season, and he still leads Kamara on a point per game basis in ½-point, PPR formats.

Cook endured a workload that is virtually non-existent in today’s NFL. Over his last nine games, the Vikings’ star touched the ball 252 times, producing 1,365 all-purpose yards and 10 touchdowns in that stretch. While Kamara’s Herculean Week 16 effort brought home fantasy championships to many managers, Cook’s consistency throughout the season was unrivaled. It is for that reason that I nominate Dalvin Cook as this year’s best fantasy football running back.

I also must show some love for James Robinson. He ranks third behind Cook and Kamara in my voting among running backs but is the runaway leader for me in both the Rookie of the Year and Fantasy MVP vote. Jacksonville bettered only the New York Giants and New York Jets in points scored this season, and their offensive line has not done Robinson many favors along the way. Their 69% run-blocking win rate is 26th in the NFL, and the 1.09 yards before contact created by their unit upfront ranks 31st.

Yet Robinson finished the fantasy season third in the NFL in rushing yards and fourth among running backs in fantasy points. When you consider that Robinson began the season on the waiver wire in many leagues, the undrafted rookie provided one of the best returns on investment we have seen in recent fantasy football memory.

Wide Receiver of the Year

Before the 2020 season, I labeled Aaron Rodgers as a quarterback bust. However, I’m taking a massive loss here since Rodgers ended as the second most efficient quarterback with a +31.1 Production Premium (No. 2). With that said, Davante Adams commanded a high target share, and he also ranked highly in the efficiency metrics. Adams earned a 34.6% Target Share (No. 1) with a +28.7 Production Premium (No. 4), 0.78 Fantasy Points Per Route Run (No. 1), and 2.39 Fantasy Points Per Target (No. 4). In two fewer games, Adams scored two more fantasy points than Tyreek Hill in ½-point, scoring leagues. Imagine what those numbers would look like over a full 16 games played.

With some question marks surrounding Stefon Diggs heading to the Buffalo Bills, he silenced all critics after dominating all receiving categories. Diggs currently leads the league with 120 receptions and 1,459 receiving yards and ranks second with a 29.7% Target Share. Josh Allen took a massive leap in passing production, and Diggs likely contributed to Allen’s improvements.

Although it’s no surprise to see Davante Adams here since he had an FFPC ADP of 12.25, he dominated in 2020. However, both Stefon Diggs and Calvin Ridley smashed their ADP. Diggs had an FFPC ADP of 69, and Ridley had an FFPC ADP of 40.25. With that said, both Diggs and Ridley should rank as a WR No. 1 heading into the 2021 season, meaning their ADP will spike up. All three of these receivers likely won fantasy managers head-to-head matchups and championships.

Tight End of the Year

If there’s a clear consensus winner for any skill position, it’s gotta be Chiefs TE Travis Kelce. The eight-year veteran validated all Fantasy Football managers who drafted him early as he finished the season as the No. 1 TE in all scoring formats—by a wide margin. In fact, his 260.3 half-point PPR points would’ve made him the overall WR No. 3, beating out league-winning superstars like Stefon Diggs, Calvin Ridley, DK Metcalf, and DeAndre Hopkins.

Compared to running backs, Kelce would’ve landed as the RB No. 4, nestled between the colossal Derrick Henry and rookie sensation James Robinson. He finished as a Top-10 TE in all but one week, and nearly averaged 100-plus yards a TD per game. If you won your league this season, chances are good that you had Kelce boosting your team.

But if you missed out on Kelce, then Raiders phenom Darren Waller was a wonderful consolation prize. After his breakout campaign last year, Waller picked up right where he left off as fantasy’s No. 2 TE (202.9 points). While inconsistent at times, his heavy usage as QB Derek Carr’s go-to option secured a safe floor with week-winning upside. Sure, the gap between Kelce and Waller (57.4 points difference) was substantial. But it’s just as wide for the next guy, Robert Tonyan, who finished the year with 141.8 points (61.1 points difference).

Rounding out the list for me is Washington Football Team’s Logan Thomas. While he was the overall No. 6 TE in fantasy points (129.4) and had downright putrid games early on, he’s my vote for the bronze medal because he may have been the reason you got into the playoffs and he was available for free on waivers.

Since Week 6, Thomas was the overall TE No. 3, an outstanding feat made even more impressive when considering that he did so by catching passes from the least desirable QB carousel of Kyle Allen, Alex Smith, and Dwayne Haskins. In his last four games, he averaged a whopping 10.8 targets, 8.8 receptions, 76.3 yards. Thomas’ consistently favorable fantasy production in the second half of the season—particularly in December—edges him over other higher scoring candidates like Tonyan or T.J. Hockenson, who may have dashed your championship hopes with their ghastly Week 16 performances.

Kicker of the Year

While kicker leagues are often portrayed as inferior due to the extra added variance involved, some kickers were not just loaded with opportunity but produced without their fantasy managers breaking a sweat. While most of the hype surrounded the legend of Younghoe Koo who seemingly couldn’t miss and carried his fantasy owners and the Atlanta offense for a while, a tipped field goal in Week 16 might have cost some titles. Instead, my first-place vote went to the situation and clutch gene of Miami’s very own Jason Sanders.

Along with Koo and Dallas’ Greg Zuerlein, Sanders was tied for the lead in field goals attempted. He hit 34 of them while also going a perfect 34-for-34 on PATs and in leagues that account for length of field goal, Sanders was this season’s No. 1 kicker, going a perfect 15-for-15 from within 40 and a stellar 11-for-13 between 40 and 49 and hit 8-of-9 beyond the 50 mark. Only Denver’s Brandon McManus attempted and made more outside of the 50-yard length.

Sanders’ season is another testament to seeking kickers with range and a situation that isn’t flooded in touchdowns such as Will Lutz, who went a berserk 54-of-54 on PATs but was outside the Top 10 at his position in fantasy this season.

Rookie of the Year

For those of you willing to die on the hill that owning rookies in fantasy football remains one of the riskiest strategies in the game, you sure missed out on some talent again. Yet, the draft class produced top-tier offensive talent and in many cases, immediate fantasy studs. In one case, it was the early NFL debut for the rookie fantasy points leader of 2020 and likely Offensive Rookie of the Year Justin Herbert. In another case, it was 2020 NFL draft first-rounder from LSU, WR Justin Jefferson. Offenses were in dire need of using their newest talent.

Robinson gets my first-place nod for this award for being one of the best rookies in the NFL at perhaps the most important position to stack talent. He proved his worth in the Jacksonville system as early as Week 1 when he got 17 touches and continued to ball out with volume and production for those fantasy managers who picked him up off waivers. Through Week 16, Robinson was Top 5 among running backs in rushes, touches, rushing yards, and yards from scrimmage and was a weekly start in all formats.

He finished the year (Weeks 1-16) as the PPR RB No. 4 and displayed some immunity towards his messy quarterback situation, producing at a Top 24 running back nearly all season. With Clemson quarterback Trevor Lawrence likely joining Robinson in Jacksonville in 2021, the offensive ceiling of everybody on the Jaguars is expected to rise, and Robinson could be seeing re-draft league action in 2021 drafts as early as the first round.

For the rest of eternity, Travis Kelce deserves a gold bust among the pantheon of all-time fantasy football stars. In PPR-scoring leagues, the Chiefs’ playmaker scored 312 fantasy points on 105 receptions for a league-record 1,416 receiving yards among tight ends and 11 touchdowns. In ten games, Kelce produced over 20 fantasy points and fell below double-digit points only once all season…Incredible!

There is no doubt that Kelce helped many fantasy footballers win their Championships in 2020. I will never forget the Kansas City game breaker for the rest of my life, and Kelce’s crusade now ranks among the greatest fantasy football seasons of all-time.