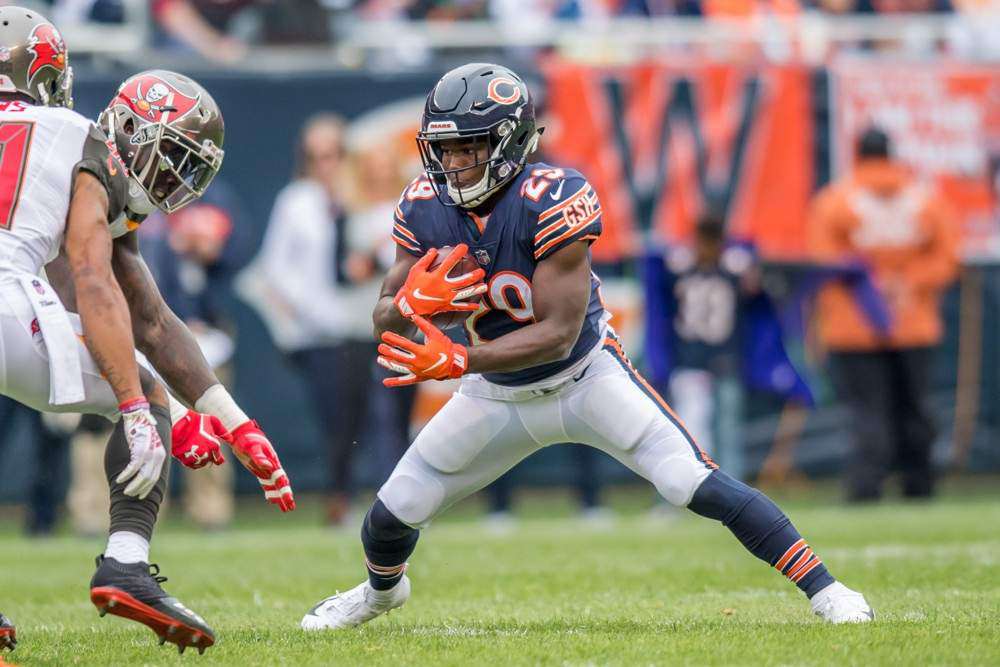 Sometimes the definitions for sleepers and breakouts overlap, but typically I define sleepers as players drafted in the double-digit rounds. Generally, for sleepers, we dig a little deeper, although breakouts can also be sleepers. Potential league winners would be another way to define the 2020 breakout running backs.

In late June, I wrote about Tarik Cohen as an underrated player coming into 2020. Over the last two seasons, Cohen finished top-10 in targets, receptions, and receiving yards. The only other running backs that reached those marks – Christian McCaffrey, James White, and Alvin Kamara. 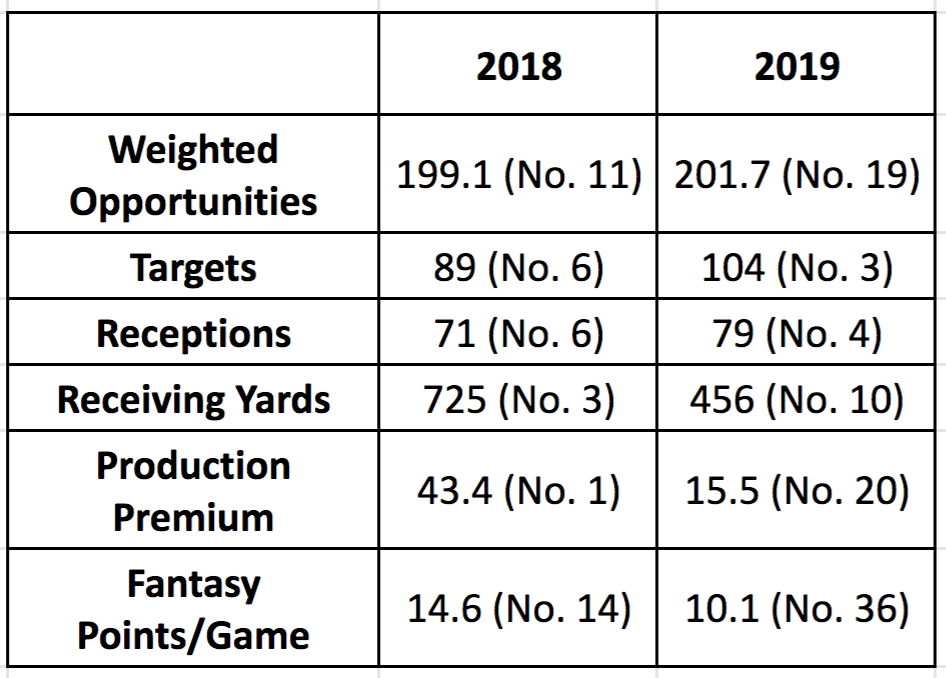 In 2018, Cohen displayed extreme efficiency ranking first in Production Premium. However, in 2019, he received more targets and volume, but his efficiency dropped and ranked 20th in Production Premium. He also finished in the top-20 in Weighted Opportunities, which is a Player Profiler metric that measures total opportunities and values targets more than carries. Cohen’s a breakout running back, and his 85.3 ADP as the 38th running back represents his floor. Tarik Cohen’s the No. 1 2020 breakout running back.

Outside of four touchdown-dependent games, Tevin Coleman struggled last season. After playing in week one, he missed the next two weeks due to a high ankle sprain. During the two weeks that he missed, Matt Breida and Raheem Mostert combined for 450 total yards proving the fruitfulness of the 49ers run game. From weeks 5-8, Coleman received the majority of touches. Then from weeks 9-12, there appeared to be a more even split amongst the three running backs. From week 13-17, Mostert led the backfield and received most of the touches. Overall, it was a rollercoaster season that lowered Coleman’s ADP in 2020.

With Mostert’s finish, his ADP skyrocketed while Coleman’s ADP dropped to the 8th round at pick 84.7. Coleman’s the cheaper running back of the two, and worth the gamble as a breakout running back candidate. With Breida now in Miami, the split amongst three running backs whittles down two. Although 30 total targets (No. 43) for Coleman was low, he received the most targets amongst the trio last season. Coleman has averaged 41 targets the previous three seasons, while Mostert compiled a career total of 29 targets over his five-year career with all of them coming the last two years.

Coleman’s a Breakout & a Sleeper

In Weighted Opportunities, Coleman ranked 38th, Mostert ranked 44th, and Breida ranked 47th. A running back involved in the rushing and receiving game will not be game scripted out, meaning more opportunities to provide production and value. Fellow FantraxHQ writer, Taylor Lambert included Coleman in his running back sleeper article as well.

In six games last season, Duke Johnson finished inside the top-24 with efficient production. He ranked 16th or better in targets, receptions, and receiving yards the prior two seasons. Duke Johnson displayed efficiency and explosiveness with 6.5 yards per touch (No. 2), 7.2% breakaway runs (No. 4), and ranked 15th in Production Premium. He’s shown consistent production and efficiency the last two seasons outside of breakaway runs in 2018. 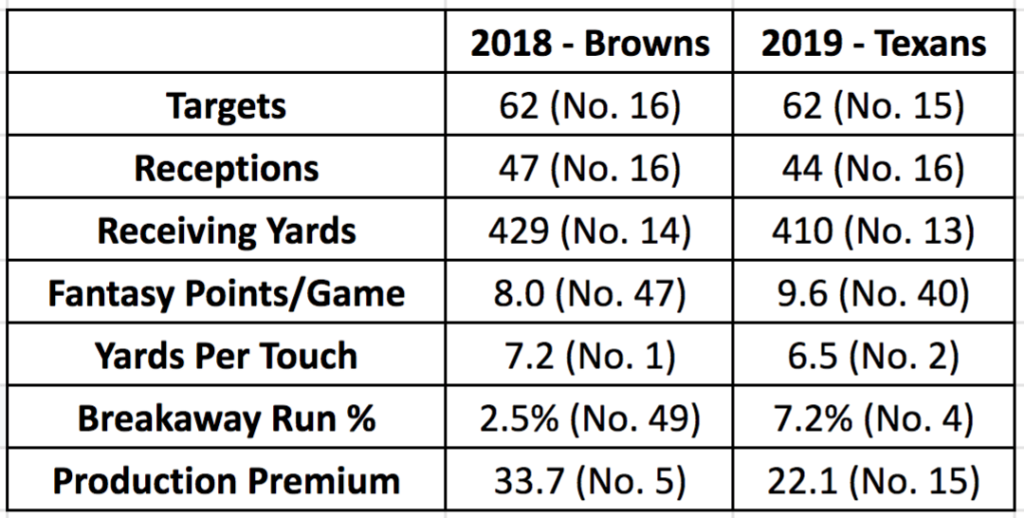 If David Johnson misses time due to injuries or ineffectiveness, then Duke Johnson leaps into RB2 production. In deeper leagues with multiple flex positions, Duke Johnson immediately provides value with his involvement in the passing game. He ranked 33rd in Weighted Opportunities on Player Profiler, which values targets more. On Fantasy Football Calculator, he’s being drafted as the 50th running back with a 119.4 ADP. He’s ready to duke it out, smash his ADP, and break out in 2020.

In the final four weeks of the season, Boston Scott averaged 6.25 targets and 20.5 fantasy points per game with two top-5 finishes. Last season, the Eagles running backs shared snaps and touches throughout the season. Through the first nine weeks, Jordan Howard and Miles Sanders shared opportunities. Then from week 11 on, Miles Sanders exploded and averaged 17.2 fantasy points per game. During weeks 14-16, Scott chipped in and performed well with shared snaps and opportunities. In week 17, Sanders left with an injury, and Scott finished with 35.8 fantasy points ranking 2nd that week.

Scott’s 123.7 ADP in the 11th round makes him the 51st running back drafted behind Duke Johnson. Disregard Scott’s season-long production since he didn’t play more than 40% of the snaps until week 14. Scott displayed efficiency and ranked 6th in Production Premium. He shared snaps and touches with Sanders the final four weeks, and we expect that to continue in 2020. If Scott’s opportunities increase, then cue the breakout year dance. Regardless, he’s a draft steal and a draft priority because he’ll produce immediately. Fellow FantraxHQ writer, Mick Ciallela also listed Tarik Cohen, Duke Johnson, and Boston Scott as draft values in 2020.

With Damien Williams opting out, DeAndre Washington has the chance to share touches and opportunities with exciting rookie Clyde Edwards-Helaire. The way Edwards-Helaire’s ADP (6.1) jumped up, it shows many drafters are all in on him. On the flip side, devour Washington’s draft value, as he fits the breakout running back parameters. Washington receives targets, catches passes, and potentially provides flex worthy production in deeper leagues with multiple flex spots.

Similar to Boston Scott, Washington finished on a tear when provided the opportunities. During weeks 14, 16, and 17 last year, with Josh Jacobs injured, Washington averaged six targets and 20.5 fantasy points per game finishing inside the top-11 all three weeks. Washington’s 158.3 ADP in the 14th round makes him the 63rd running back drafted. Don’t forget about DeAndre Washington as a breakout running back, and like Boston Scott, he’s a steal in drafts.

Last year, Justin Jackson received limited touches and missed nine games due to injuries. Jackson touched the ball 38 times for 222 total yards and 5.8 yards per touch. Over his two year career, he received over ten touches once in 2018 when he totaled 85 yards and a touchdown.

With Melvin Gordon gone, Jackson looks to share touches with Austin Ekeler. At Northwestern, Jackson displayed the ability to be productive in the rushing and receiving game. Jackson averaged 1,360 rushing yards and 214.5 receiving yards with a 12.8% target share (88th percentile) in his final season. With more opportunities available and the ability to catch passes, Jackson’s a sneaky breakout running back candidate with a 129.7 ADP in the 11th round as the 52nd running back drafted.

Ke’Shawn Vaughn had a 40.4% College Dominator rating (90th percentile) and a 10% target share (74th percentile). Although there’s some hype surrounding Ronald Jones, Vaughn’s also in the mix for touches and a potential breakout running back candidate.

Although the Rams drafted Cam Akers in the second round, monitor Darrell Henderson. In his final season at Memphis, he eclipsed 1,900 rushing yards with an 8.9 yards per carry (98th percentile) and a 33.9% College Dominator rating (78th percentile). He also averaged over 252 receiving yards per season, and there’s the potential for involvement in the passing game. Henderson barely touched the ball last year with the Rams, but he’s worth a late-round dart with a 115.6 ADP in the 10th round as the 48th running back.